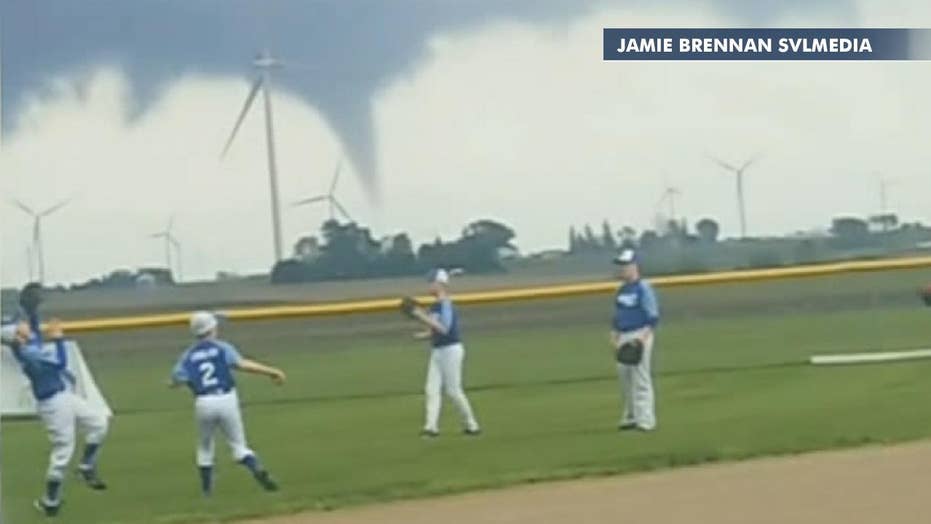 Baseball team practices with a tornado visible in the distance

Raw video: Group of fifth and sixth graders continue to warm up prior to a baseball game in Montezuma, Iowa with a tornado visible in the distance.

These Little League baseball players must have ice in their veins.

The team from Montezuma, Iowa, were warming up on the field before a game last week and a parent caught a tornado swirling in the distance.

“The tornado appeared very quickly and also disappeared fairly quickly as well,” the parent, Jamie Brennan, told the Des Moines Register on Thursday. “The game before ours was canceled due to potential tornadoes. By the time it was our turn, everyone thought the storm had passed. When they were warming up, it was clear outside — there was no lightning, rain, wind or anything.”

The twister appeared as a spate of severe weather clobbered the Midwest. The National Weather Service confirmed that a tornado did touch down near Montezuma last week, according to the Des Moines Register. The tornado injured one person.

“I know the video appears careless, but there were many people there and no one was panicking,” Brennan said. “If I felt like it was a dangerous situation, I would have removed my child from the field immediately.”

Montezuma is located about 60 miles west of Iowa City.