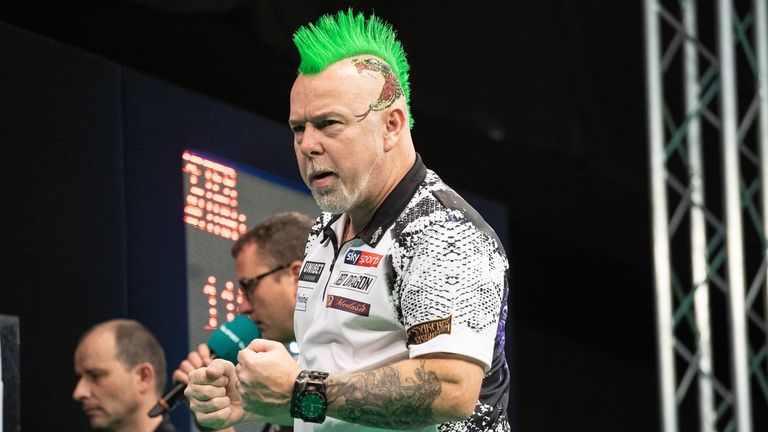 Peter Wright bounced back in style by beating Gerwyn Price 8-3 to win the final Players Championship event of Super Series 2 in Milton Keynes.

The 2020 world champion came out on top in a high-class final four that also featured in-form Joe Cullen and day one winner Brendan Dolan as well as Wednesday’s champion Price.

Wright averaged more than 100 in five of his seven matches to end a week that had seen him twice reach the last 16 as well as suffer a first-round exit with victory over Price, the man who took his crown as world champion at Alexandra Palace in January.

Snakebite, beaten in the third round at Ally Pally, lost just four legs in his way to the last 16 where he was pushed to a last-leg decider by Steve West before he eventually prevailed and then produced a blistering display to average 108.3 in a 6-4 victory over Steve Lennon.

"It was going to take something special to stop me today"

That victory saw him into a final four showdown with top seed Joe Cullen and Wright blew away the Rock Star with another 100+ average to set up his final against Price who beat Dolan 7-2 to reach a second final of the week.

Price had won his last seven finals, while Wright was without a Tour title since a Pro Tour success in November but it was the latter who went on to claim the £10,000 winners cheque starting with an early break and forging a 5-1 advantage.

The Iceman hinted at a comeback when a 12-darter brought him within three but Wright claimed three of the next four legs for the title.

“Coming to the venue I said that I felt it was coming,” Wright said.

“Today I felt on a different level to everyone else. After the first round today, it was going to take someone special to stop me.

“It’s really weird and it’s a great feeling, and if I could put it in a jar and then take it out for the next tournament it would be fantastic – but tomorrow I could pick up the darts and throw absolutely terrible!”

Super Series 2….the story so far

World Cup winners Price and Jonny Clayton had joined Dolan in the winner’s circle over the first three days of competition at the Marshall Arena.

Clayton has been the star man on the PDC Tour this year, backing up his World Cup win alongside Price in September last year by landing his maiden televised title at The Masters to seal the final spot in the 2021 Premier League.

He has followed up by reaching four of the eight Pro Tour finals this year – winning twice with Thursday’s win over James Wade adding to his success during the first block of Pro Tour matches.

Northern Ireland’s Dolan was the winner on day one, beating Michael Smith in Tuesday’s final having knocked out Price en route to the final. The Iceman bounced back to claim his first title since becoming world champion, beating Luke Humphries to claim Wednesday’s £10,000 first prize.

With the Premier League the next notable action on the PDC Circuit at the start of April, the majority of players have a break until April 24 when the Pro Tour resumes with four more Players Championship events, this time in Niedernhausen in Germany as part of Super Series 3.

It will be rivalries renewed when the delayed 2021 Premier League Darts gets underway on April 5 as Glen Durrant and Nathan Aspinall clash on an opening night that will also feature a repeat of the World Championship final.

Gerwyn Price claimed his first world title with victory over Gary Anderson at Alexandra Palace, and with the pair both in the 10-man field for this year’s Premier League, they will meet again on Monday, April 5.

After Price’s victory over Anderson, the PDC confirmed that the traditional 17-night roadshow would be pushed back to Easter rather than its usual February date and last month it was confirmed that the tournament will begin behind closed doors due to Covid-19 restrictions.

Watch live coverage of the 2021 Premier League on Sky Sports – the action gets underway on Monday April 5 with five consecutive nights of action as the first phase begins from the Marshall Arena, Milton Keynes.