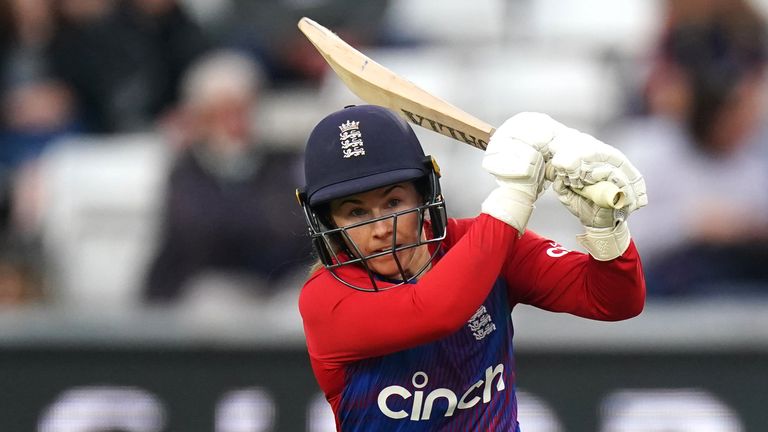 Tammy Beaumont produced a sensational innings to inspire England to an emphatic 46-run victory over New Zealand in the first T20 international at Chelmsford.

Beaumont struck a brilliant 97 from 65 balls to guide England to a formidable total of 184-4, and New Zealand were unable to inject any momentum into their run chase, as they were bowled out for 138 in the 19th over.

Nat Sciver captained the side in the absence of Heather Knight, who was ruled out with a hamstring injury, while Emma Lamb was rewarded for her prolific domestic form with an England debut.

The evening started on the right note for New Zealand, with skipper Sophie Devine winning the toss and inserting the hosts. Nevertheless, Beaumont and Danni Wyatt were unperturbed, racing to 33-0 inside the third over.

Having dispatched Leigh Kasperek (1-53) for three consecutive boundaries, Wyatt (14) was deceived to a 41mph delivery from the White Ferns’ spinner, although this only provided the visitors with temporary respite.

Sciver (14) underlined her destructive potential with a majestic maximum over mid off, but she was rather subdued by her explosive standards, succumbing to an impressive Hayley Jensen (2-26) in the 10th over.

The game was evenly poised with the hosts 74-2 at the halfway stage, but Beaumont and Amy Jones ran riot in a remarkable passage of play – registering 36 runs in two overs to put a beleaguered New Zealand attack to the sword.

Jones (31) displayed tremendous innovation in her enterprising 15-ball knock, while Beaumont produced a series of glorious strokes over extra cover, with the pair compiling a third-wicket stand of 53 from just 25 deliveries.

Great knock from the England batter, who brings up her 50 from 41 balls with a classic shot for four on the off side👏#ENGvNZ

Jones’ dismissal did little to stifle England’s momentum, as Sophia Dunkley (23 no) provided an effective foil for the irrepressible Beaumont, who was the beneficiary of a profligate New Zealand fielding display.

The England opener continued to find the boundary with consummate ease, only to fall agonisingly short of a sensational century in the penultimate ball of the innings.

If New Zealand harboured any aspirations of completing a record run chase, they required fireworks from the decorated duo of Suzie Bates and Devine, and that did not materialise.

Tash Farrant marked her return to the international stage by trapping Devine (2) lbw to complete a wicket-maiden in her first over, before Katherine Brunt (2-9) clean bowled Bates (1) to leave the visitors floundering at 4-2 in the third. The third-wicket partnership between Amy Satterthwaite (43) and Maddy Green (19) showed promise, until an outstanding catch from Farrant accounted for Green, and the White Ferns continued to lose wickets at regular intervals.

Sarah Glenn (2-24) and Mady Villiers (1-17) opened their accounts before Villiers starred in the outfield, taking an excellent diving catch to dismiss Satterthwaite seven runs short of her half-century, to hand Brunt her second wicket.

The White Ferns were in danger of being blown away at 82-6, although their lower order provided spirited resistance, with Jensen (16), Thamsyn Newton (14), Jess Kerr (12 no) and Hannah Rowe (11) all reaching double figures.

This simply delayed the inevitable, however, as Sciver (1-31) and Sophie Ecclestone (2-24) struck in the closing stages to wrap up a comprehensive evening’s work for England. 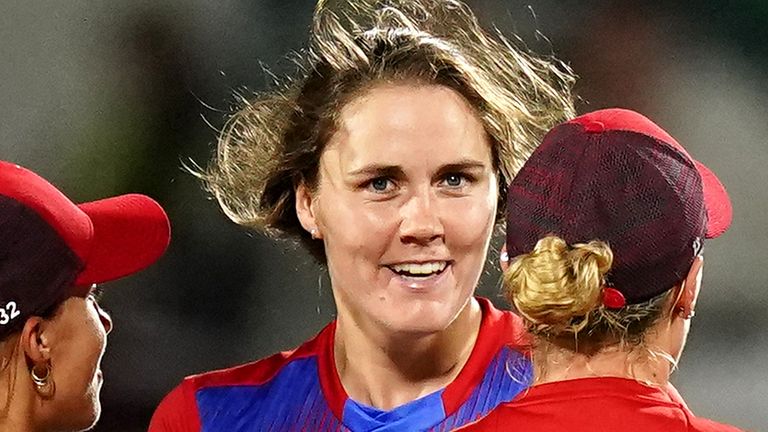 Nat Sciver: “We’ve played a lot of cricket over the last three months as a side and I think it showed. There is room for improvement but I think showed today we’ve been on the park quite a lot.

“The consistency of areas we hit with the ball, that was a little bit lacking but we were clinical and managed to bowl them out so you can’t get too upset.

“We were pretty special with the bat – Tammy obviously was so close to that hundred but I’m sure she’ll get there again. I think she likes batting to heavy metal so we’ve asked the band to come down to Hove (for the next T20I)!”

Sophie Devine: “I think we leaked too many runs and the fielding obviously didn’t help, when I dropped two catches!

“But credit has got to go to Tammy Beaumont, she batted magnificently and probably got away from us. I thought Hayley Jensen was outstanding with the ball.

“England have come off a full summer of playing cricket and there’s only so much training and warm-up you can do before you get out in the middle.”

Watch the second T20 international between England and New Zealand, at Hove, live on Sky Sports Cricket from 6:45pm on Saturday.