Home » Sport » The Miami Heat’s ‘world-class’ conditioning program includes simple, but rigorous tests that have become legendary in the NBA 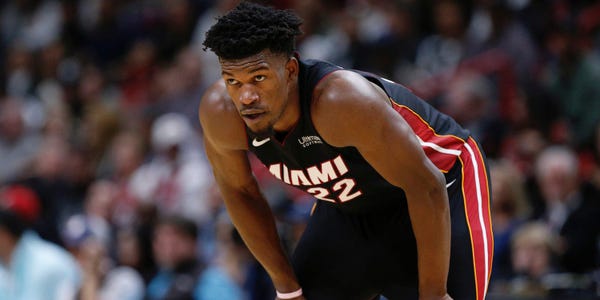 The Miami Heat's strength and conditioning program is so difficult that it often takes players to levels they didn't realize were possible.

When Dion Waiters was traded to the Heat in 2017, he wrote in The Players Tribune that team president Pat Riley gave him notice about his conditioning.

Waiters wrote that was he skeptical, believing he was already in NBA shape.

"After one week, my body [was] shot," Waiters wrote. "I was damn near throwing up in trash cans like in the movies."

Waiters was so impressed by his progress that he posted before-and-after photos from going through the Heat's program.

Waiters' documentation of his progress wasn't unique — HoopsHype's Alex Kennedy reported in 2017 that players take three photos — one before the season, one during their season, and one after — to document their progress. They have their bodyfat checked every Monday. That is not common practice around the NBA.

It's all part of the Heat's intense strength and conditioning program, one they repeatedly refer to as "world-class." Over the years, the Heat's program has become legendary in the NBA, bordering on folklore.

For all of the heap praised on the team, the few anecdotes that exist about what exactly the Heat do largely paint the picture of an old-school, militaristic program. ESPN's Brian Windhorst reported in 2016 that during LeBron James' first season in Miami, training camp took place at a military base, and the first three days were devoted solely to conditioning and defensive drills; no one touched a basketball.

Windhorst reported this postseason that the Heat's notorious conditioning drill is wind sprints, the length of the court, over and over again.

Some reportedly believe it's the toughest test in the NBA and NFL. Jimmy Butler did not pass it on his first go-around. By the time Dwyane Wade was a veteran member of the Heat, he "pulled rank" and opted out of the test each season, according to Windhorst.

In another exercise documented on the Heat's YouTube channel, players must run on a manual-resistance treadmill and get up to 12 miles per hour. Once there, they have to maintain that speed for five, 20-second intervals, with one minute of rest in between.

Former Heat guard Josh Richardson, who was traded to the Philadelphia 76ers for Butler, discussed the test and "world-class" program upon joining the Sixers.

"They call it 'world-class conditioning,'" Richardson told reporters. "When you get to camp, they expect you at a certain bodyweight, a certain conditioning level, because from day one, you're hitting the ground running. They have a conditioning test down there that's not easy, so it's your first introduction to training camp, honestly, because it's like a week before."

A Heat player who chose to remain anonymous told Kennedy in 2017: "They had us come in early during the offseason to prepare for training camp. We did sprints and other conditioning drills, and we even went outside to push some sleds and flip tires and stuff like that. This was all to get ready for training camp."

Things don't get easier in training camp or the season. According to Kennedy, the Heat fine players $100 for putting their hands on their knees during a game or practice. Kennedy and Windhorst both reported that players would drink detox drinks or hit the steam room to sweat off pounds before weigh-ins.

While Riley has received a bulk of the credit for creating a culture of accountability in Miami, many also credit the father-son team of Bill and Eric Foran, who run the strength and conditioning program.

Former Heat forward James Johnson, who lost 40 lb and got his body-fat percentage down to 6.75% while in Miami, told Anthony Chiang of the Miami Herald that the Forans should get "all the compliments and all the rewards" for the program.

The Heat's program stands in contrast to some other NBA programs, which focus on building up slowly so that players can be at their peaks at the end of the season. In recent years, some teams barely practice during the season to let players get adequate rest.

The Heat's conditioning has paid off in the playoffs. The Heat have mounted several impressive comebacks in the postseason, illustrated by their first- and second-half splits — they are just a +7 in first halves in the postseason, but are a +63 in second halves.

While the program isn't for everybody, many NBA players love the intensity of Miami's culture.

"They're actually looking out for you," Jimmy Butler told reporters in training camp in 2019. "Whether you want to look at it like that or not, they're making sure that you're healthy, that you're at a weight that you can function at to help us win, and that your body fat needs to be down, to watch what you put into your body. I like it. I'm a fan of it."

Heat center Meyers Leonard said in October that the expectation should be that players are in world-class shape.

"I love it," Leonard told reporters. "That's the way it's supposed to be. Look, we're in the greatest association in the world. We're getting paid millions of dollars to play basketball, which is a game we love. How in the world should we not be in shape and ready to rock and roll every single day?"