He was a Hall of Famer, but there was plenty he disliked about his sport and his life.

There was the travel. "I spend half my life in strange towns, a thousand miles away from my wife and kids,” he wrote. “To put away as much money as I want, I know I’ll have to have five more good seasons. I’ll miss the chance of watching even my youngest child as he grows a little day by day.”

There was the impermanence. Once he and his family had to make three moves in quick succession. There was the lack of sleep, the erratic eating, the moodiness of coaches, the abuse from fans at the stadium and farther afield. 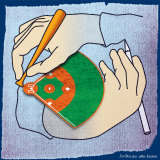 “There’s as much pressure to produce as there is in anything in the world,” he wrote. “If you make a mistake in your office, maybe your boss calls you down. If I make one on the field, there are a couple of million people waiting to call me a bum.”

There were sportswriters. “They know just as much as my four-year-old daughter,” he wrote, “but they write expert articles about what’s wrong with me every time I go a few games without a hit.”

There were compensations, yes. “I’ve made an awful lot of money,” he wrote. “But they take it out of you in sweat and worry. It’s not like I stole the money.”

Above all, there was the system. His sport was baseball. When he was first recruited, he was said to have the perfect swing and steel springs for legs. He was the next big thing.

He wasn’t. His perfect swing was imperfect against curve balls. His steel springs didn’t matter if he couldn’t hit the ball. “I started badly,” he wrote. “The fans only know what they read, and when I struck out a lot, they got on me. The fans booed because I wasn’t the next big thing, and I brooded because they booed.”

This is not last year or the year before, but 1956. It is from a famous essay in Collier’s magazine written by the Dodgers’ Duke Snider, ghosted by Roger Kahn. It was titled “I play baseball for money, not fun.” It attracted criticism of Snider as a whinger and Kahn as an exploiter.

It became his motif. Fifteen years later, he wrote an affectionate book about that Dodgers team and what became of them. Called The Boys of Summer, it has sold more than three million copies. In 2002, a Sports Illustrated list of the 100 best-ever sports books placed it second behind only The Sweet Science by A J Liebling.

“It ushered in a new way of thinking and writing about baseball,” wrote Eric Nusbam in Slate this week, “a more complicated form of nostalgia that empowered players and humanised them.”

Snider is dead. Collier’s is long dead. The Dodgers are on the other side of the US. Kahn died last week, aged 92, closing a chapter. But there’s nothing as unchanging as human nature.

“Miles” places the Collier’s essay, “bum” puts it in a time. The big thing that Snider was the next of was Stan Musial. The travel that so wore him out was mostly on trains. The fans registered their disgust not in social media posts, but by throwing marbles and beer cans.

But much would be recognisable still to pros in all sports. The vulnerability, the pressure, the travel-weariness, the exposure, the loneliness, the bad press, the fact that no-one wants to hear about it anyway. Snider’s wife Bev learned that early.

Ultimately, the Collier's essay is affirming. Snider dreamed of playing in a World Series. When at last he did, it became a nightmare for him and the Dodgers. Reflecting a fortnight later, he realised that if this was rock bottom, it was OK. “I’m still alive, still got my friends,” he wrote, “and the finance company hasn’t taken away the car.”

No longer was it necessary to dream of playing in a World Series, so while out on the pitch playing in his fourth a few years later, he nursed another dream, “to settle down to raise avocados in the California sunshine”. And he did.