There was no need to pipe in crowd noise at Globe Life Field on Monday, as the Texas Rangers hosted the Toronto Blue Jays in front of the largest crowd at a sporting event in the United States in more than a year.

From the long lines of fans waiting to get into the stadium to the persistent buzz of the spectators during quiet moments, the game in Arlington, Texas, was a throwback to a time before the coronavirus crippled the country.

The state’s lifting of capacity restrictions made the enormous crowd possible. And for Major League Baseball, which claims its teams collectively lost billions during a largely fanless 2020 season, it was a hopeful sign that large crowds can return to all of the league’s games before too long. The open question is whether such events can be safe as the pandemic continues.

The Rangers announced in March that the team would sell tickets for every seat of their home opener in a stadium that opened last season. And on Monday that came to fruition, with an official crowd of 38,238 fans. That total, which was announced as a sellout, represented 94.8 percent of the stadium’s 40,300-seat capacity, and it topped the Daytona 500 (which allowed slightly more than 30,000 fans) and the Super Bowl (24,835), both of which were held in February, as the largest crowd at a U.S. sporting event since the pandemic began last year.

But the difference was even more stark than the raw numbers suggested considering the capacity of the other venues. The Daytona International Speedway in Daytona Beach, Fla., can hold 101,500 fans, and Raymond James Stadium, in Tampa, Fla., can be configured to hold as many as 75,000. As a result, both events had room for fans to practice social distancing. Rangers fans, meanwhile, were shoulder-to-shoulder in the team’s fairly intimate retractable-roofed stadium.

M.L.B. requires all fans over age 2 to wear masks at games this season, but a large percentage of the fans in Arlington went maskless. That will undoubtedly raise fears of the event resulting in a spike in coronavirus cases.

Health officials in Florida said that the Super Bowl did not turn into the super spreader event that some feared. Dr. Anthony S. Fauci, the U.S. government’s top infectious disease expert, said he believed baseball games could be “pretty safe” since most are played in open-air stadiums. That being said, the director of health and human services for Dallas County, which neighbors Arlington, said he believed it was too early for large gatherings. 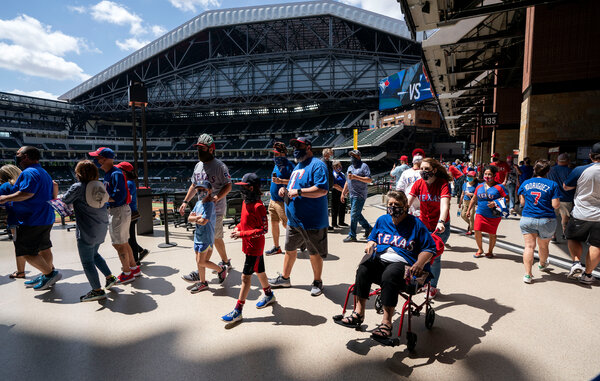 The large crowd was not able to power the home team to victory, as the Rangers lost to the Blue Jays, 6-2, as their offense was thoroughly dominated by Steven Matz, the former Mets starter. Texas, which finished last in the American League West last season, is 1-3 to start the 2021 season.

Despite the lack of restrictions in Texas, the Rangers plan to reduce the capacity for Globe Life Field for future games to allow for social distancing. Monday’s capacity crowd was permitted largely because so many fans were unable to experience the newly built Globe Life Field last season, as it opened during a pandemic-shortened season in which fans were not allowed to attend regular season games. The stadium hosted limited crowds while serving as a neutral site for the National League Championship Series and the World Series, which the Los Angeles Dodgers won in six games.

Before Monday’s game started, Gov. Greg Abbott, a Republican, publicly announced that he had sent a letter to the Rangers to decline throwing out a ceremonial first pitch. Abbott, who had previously agreed to participate at the event, said the decision was made as a reaction to M.L.B. adopting what he called a “false narrative” in moving the All-Star Game away from Atlanta in response to Georgia’s new elections rules. He said that in addition to not appearing at Monday’s game, he will not participate in any M.L.B. events and that his state will not seek to host any of the league’s special events in the future.

Abbott had played a large role in Monday’s record-setting attendance by lifting all capacity restrictions in the state. Shortly after those restrictions were lifted, the Rangers announced they would allow a full crowd for a pair of exhibition games in addition to the regular season home opener. The exhibition games, both of which Texas lost to the Milwaukee Brewers, had announced attendances of 12,911 on March 29 and 10,859 on March 30.

We were at the game on March 29 to document a stadium removing its capacity restrictions for the first time during the pandemic: 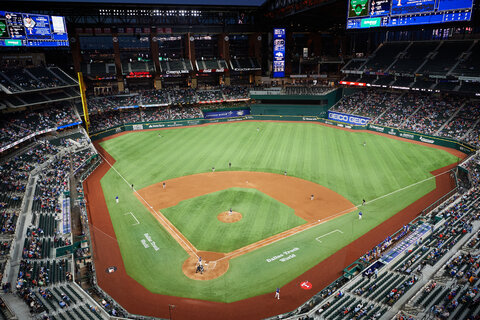 I was at Globe Life Park last night for an exhibition game between the Texas Rangers and the Milwaukee Brewers. With Texas removing capacity limits, a huge crowd was expected. 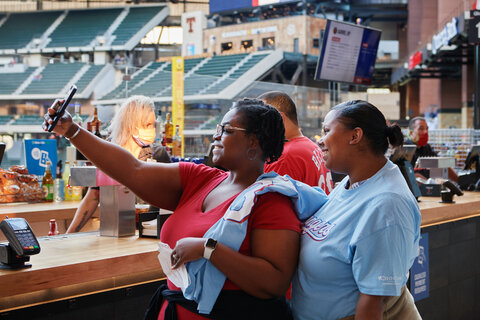 Temperatures were in the 70s and the park’s roof was open.

With a potential crowd of 40,300 people, the game could have topped the Daytona 500 and the Super Bowl as the largest U.S. sporting event of the pandemic. 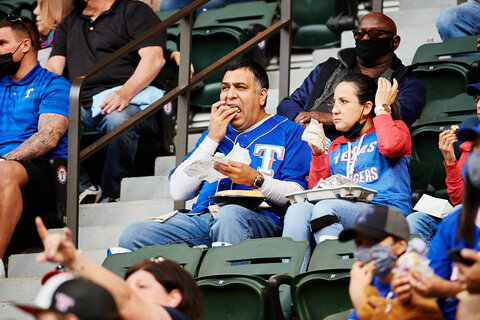 In reality, 12,911 people showed up, an impressive number for an exhibition game during a pandemic.

Plenty of fans sat shoulder-to-shoulder, but large portions of the stadium were empty as the Rangers lost to the Brewers, 4-0. 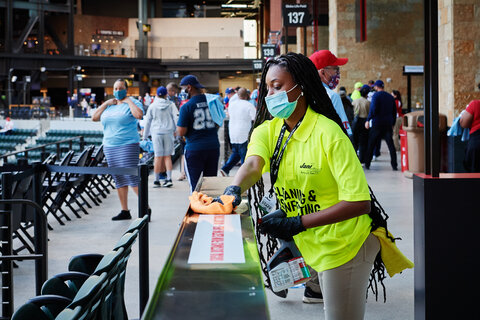 When Gov. Greg Abbott lifted coronavirus restrictions in Texas earlier in the month, he said Texans should maintain safe practices: “Each person has a role to play in their own personal safety and the safety of others.” 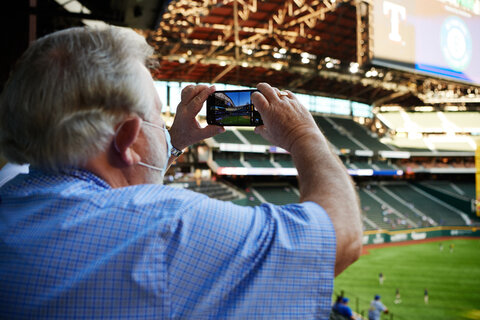 The crowd did not live up to its advance notice, but the modest size was welcome news for Sara Lambin of Georgetown, Texas.

She told me: “If this were to fill up, I don’t think I’d be that comfortable. We would leave.” 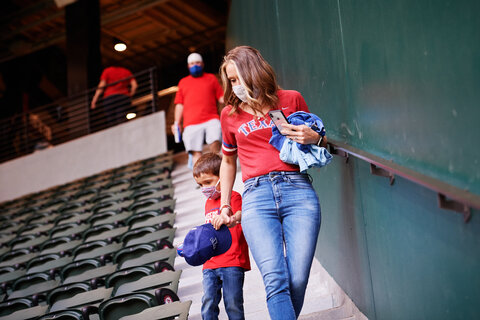 The Rangers have at least two more chances in the coming days to record the largest U.S. sporting event of the pandemic.

They will allow 100 percent capacity at tonight’s exhibition game and the team’s home opener on April 5.