If you truly are known by the company you keep, the Renaissance Club certainly got off on the right foot.

As Jerry Sarvadi, an American, and fellow investors began to tell friends years ago about the course they were building in Scotland, the first question almost always sought to know where.

The answer: Right next to Muirfield.

Yes, that Muirfield. The 128-year home of the Honorable Company of Edinburgh Golfers and host of the British Open on 16 occasions, most recently in 2013.

Jack Nicklaus, Gary Player, Tom Watson, Lee Trevino, Nick Faldo and Phil Mickelson have been among the champions there.

“To be able to tell people, ‘Literally next door,’ ” Sarvadi said, “it’s given us an identity as far as location.”

Eventually, though, it is not enough to simply live in your neighbor’s shadow.

The Renaissance Club soon carved its own niche, now with more than 250 members drawn by the Tom Doak design, stunning views of the Firth of Forth and modern touches not found among its older neighbors.

This week, the club has the opportunity to introduce itself to a wider audience as host of the Aberdeen Standard Investments Scottish Open.

“It’s the national Open of Scotland,” said Sarvadi, now the club’s managing director. “There’s only a couple of others that get the TV coverage this one has. It’s pretty unique. We’re excited about it.”

[Read more about how the Scottish Open gives players a last-minute chance to qualify for the British Open.]

As a final tuneup before next week’s British Open, the lineup has attracted at least 16 of the top players in the world rankings. Among them are the British Open winners Rory McIlroy and Henrik Stenson. Justin Thomas, Matt Kuchar and Rickie Fowler are also scheduled to play.

Three weeks later, the Ladies Scottish Open will be played over the same layout.

“It’s in a real links golf paradise,” said Stenson, the 2016 British Open winner, “just along the coast from Muirfield and so many other great courses.”

The East Lothian coastline east of Edinburgh is one of golf’s geographic gems. The stretch begins in Gullane, where Gullane Golf Club is embraced as the “people’s club” compared with the ultraprivate Muirfield. Last year’s Scottish Opens were played at Gullane.

There is also North Berwick Golf Club, where the game has been played on its West Links since 1832. Too short for the modern pro, it’s a draw for golf tourists for its creative challenge and stunning holes alongside the sea.

“It’s a nice neighborhood. Two of my favorite courses in the world are on either side,” Doak said, referring to Muirfield and North Berwick.

“Clearly you’re being held to a very high standard in that neighborhood.” 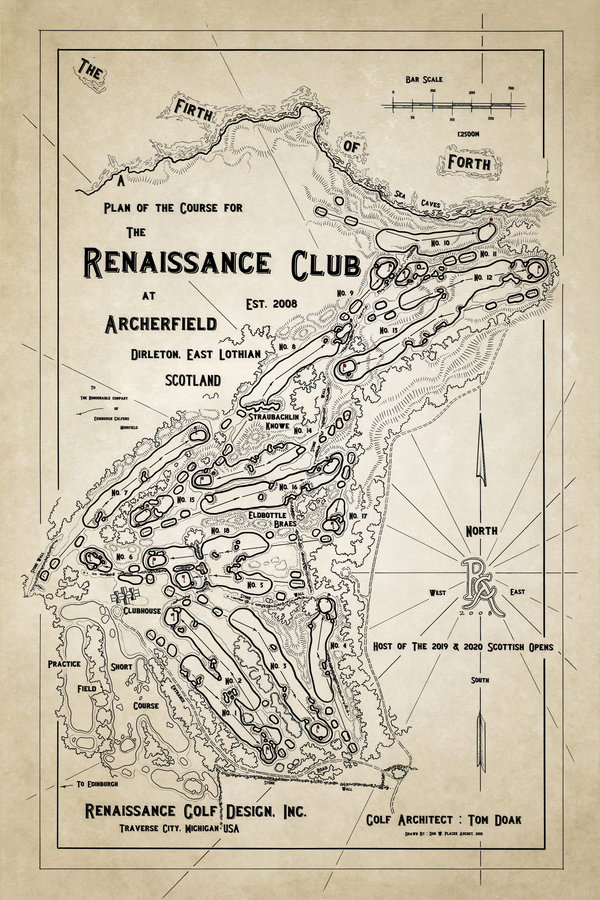 The project gave Doak, who had already designed Pacific Dunes and Sebonack in the United States, Cape Kidnappers in New Zealand and Barnbougle Dunes in Australia, his first opportunity in Scotland.

Doak spent a year after college studying the courses of Britain and Ireland, which helped shape his minimalist design philosophy.

First, though, Doak’s team had to restore the links land. Sarvadi said large stands of pine and sycamore had been planted by Britain’s Forestry Commission shortly after World War II.

“Prior to the trees’ being here, it was all links dunes land,” said Sarvadi, who retired to Florida after a career in the oil and gas industry.

He said when the stumps were pulled out, ”sand would just fall off. It was 100 percent sand.”

That hidden aspect may have been what kept golf from being developed on the property sooner. Sarvadi first heard of the tract in April 2002 while on a golf outing with his brothers and friends.

One of them was Don Lewis, whose father-in-law helped found Muirfield Village with Nicklaus near Columbus, Ohio.

“We’re drinking wine late at night and he says, ‘You guys want to build a golf course in Scotland?’ ” Sarvadi recalled. “Yeah, where?”

Sarvadi flew out for a look. Within three years, he said he had the financing, and papers were signed for a 99-year lease. Construction began the next January.

Doak said his biggest challenge came in designing holes for tournament pros while still delivering a high-end experience for members.

“In the States, if you want to build a course to host a tournament, you’d hire Jack Nicklaus or Pete Dye,” he said.

Doak said he always built courses with holes that would be “a wake-up call for the best players. But I never want to build 18 holes that feel that way.”

Significant tournaments always have been in the business plan of the Renaissance Club. It helped stage the 2016 Boys Amateur Championship and followed with the Scottish Senior Open a year later. Last year, it was one of four sites for British Open final qualifying.

“We appreciate all the history and tradition,” Sarvadi said. “At the same time, we wanted to build something that would be able to stand on its own.”

With other Doak projects on winter hiatus, “almost his whole team came over” for several months, Sarvadi said. The course opened in 2008.

Even then, Sarvadi and Doak knew it had greater potential. At the northern end of the property was a triangle of land owned by the Honorable Company, enough to design three seaside holes. At the same time, the Honorable Company wanted acreage on Sarvadi’s tract that overlooked Muirfield, so a land swap was arranged.

He said it took until 2011 for the environmental authorities to approve building the seaside holes. Those holes were built into the middle of the routing, though they’ll play as Nos. 3-5 for a rerouted Scottish Open.

Two scenic par-3s bookend No. 4, a sweeping par-4 that curves along the edge of a cliff, luring golfers to bite off as much as they dare to set up a second shot to a green set tight to the cliff’s edge.

As with any British event, weather seems the biggest concern. Sarvadi recalled Saturday of the 2002 British Open at Muirfield, when a wintry storm sent temperatures plunging and golfers seeking shelter on the course.

“It would be really bad luck if that happened,” he said.