Home » Sport » Time off for Morgan after Origin head knock

Queensland star Michael Morgan may spend an extended time on the sidelines after copping a second sickening concussion in 13 days in NSW's 26-20 State of Origin series-clinching win.

Morgan's North Queensland club said on Thursday the playmaker would be rested for Sunday's NRL clash with St George Illawarra and would be monitored in the coming weeks. 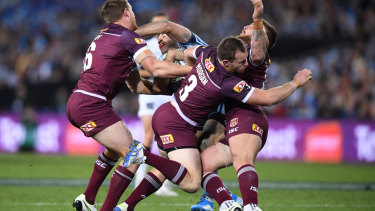 Morgan receives the heavy knock during Game 3 of the State of Origin series on Wednesday. Credit:AAP

"He's out this weekend and club medical staff will assess him in the coming days," an official said.

Morgan was left convulsing on the ground after copping a stray elbow from teammate Josh McGuire in a second-half tackle in Wednesday's thrilling series decider in Sydney.

It came after Morgan was nursed throughout Queensland's game three preparation after copping a hit from Tariq Sims on June 28 that earned the St George Illawarra enforcer a one-week ban, ruling him out of the NSW side for Origin III. 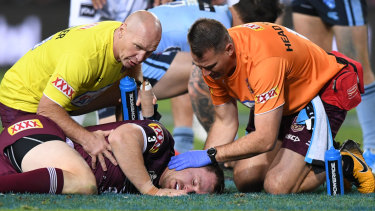 Morgan was left convulsing on the ground after copping a stray elbow from teammate Josh McGuire in the second half. Credit:AAP

Morgan had started the first two Origins in the centres but was relegated to bench utility for the decider after his disrupted preparation.

The jury is now out on when Morgan will return to NRL action after his second heavy knock, which left onlookers reeling and Queensland a man down in the Origin decider.

"He was twitching on the floor. He needs a break," Queensland great Paul Vautin told Nine Network as Morgan lay prone on the ground.

Queensland coach Kevin Walters admitted Morgan's injury was a turning point for the Maroons but still tried to make light of the incident.

"He thinks we've won so someone's got to bring him down from that," Walters quipped.

"But no, he's okay in there. That was a big moment for us as well, when we lost him.

"The way we were using him in that second half, he was going to be vital for us but unfortunately he couldn't stay on the field.