This is their ninth – having won it five times previously. They are also beaten finalists from 2018 so game faces very much on as they arrive at the Wanda Metropolitano.

Curiously, when he does play and does not score, Spurs win. When he returns with a goal, Spurs have stumbled as this graphic from FootballIndex shows. 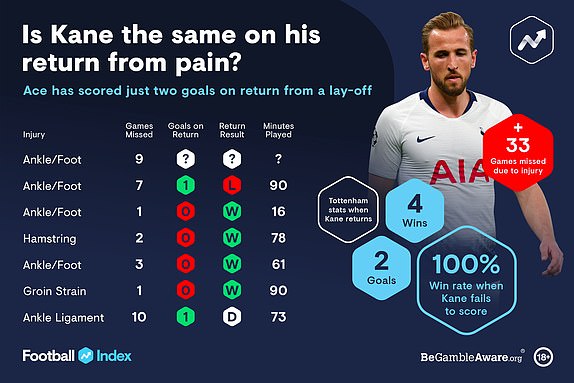 Tottenham Hotspur make six changes to the patched up side that limped home in the final Premier League match of the season in the 2-2 draw with Everton.

A lot more simple for Liverpool. It’s the same side that defeated Wolverhampton Wanderers 2-0 on the final day of the season, with the exception that the fit again Roberto Firmino replace Divock Origi. 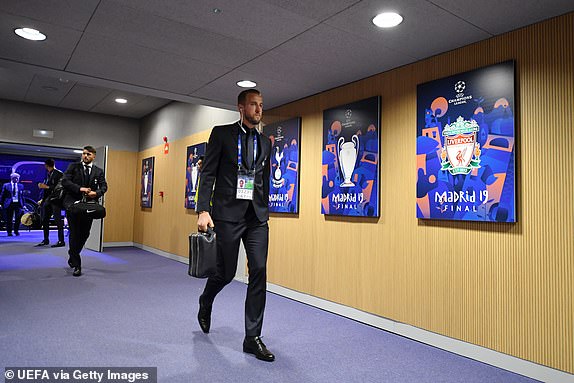 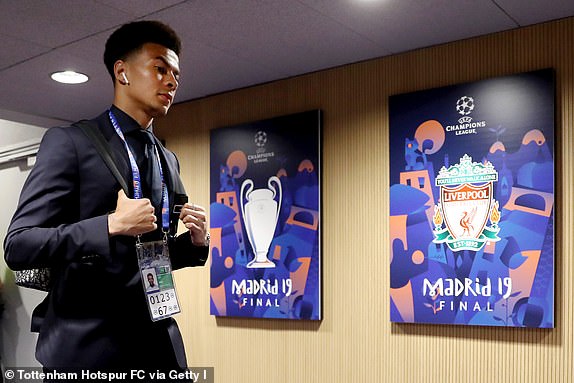 MARTIN KEOWN’S CHAMPIONS LEAGUE FINAL PREVIEW: Liverpool’s high press is a deadly weapon… Key for Tottenham is to beat it

Martin Keown believes the key tactical focus in this final is the Liverpool press and how Tottenham Hotspur deal with it, of which you can read more about here. 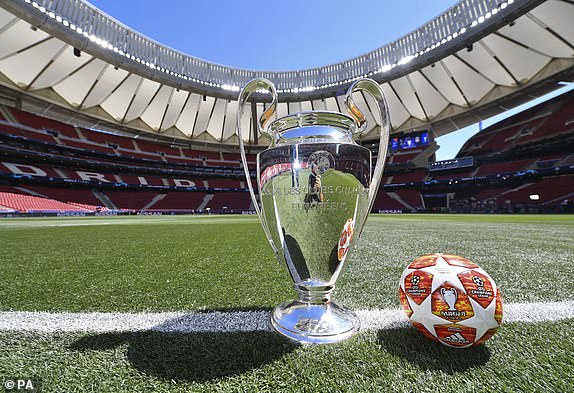 Spurs about five minutes earlier in than Liverpool, with manager Mauricio Pochettino leading his side off the team bus. 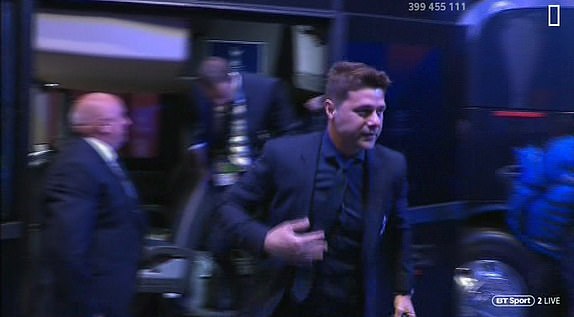 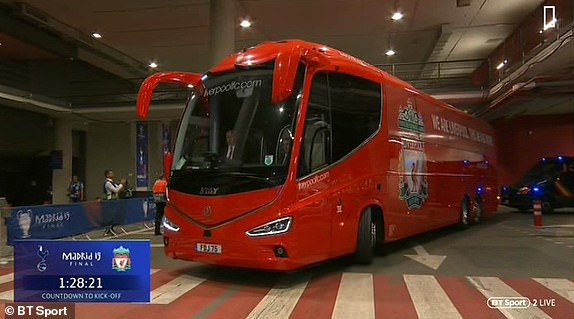 Spanish police have released images of these tickets which are in fact FAKE. Hope no fans have been duped by the fake tickets doing the rounds. 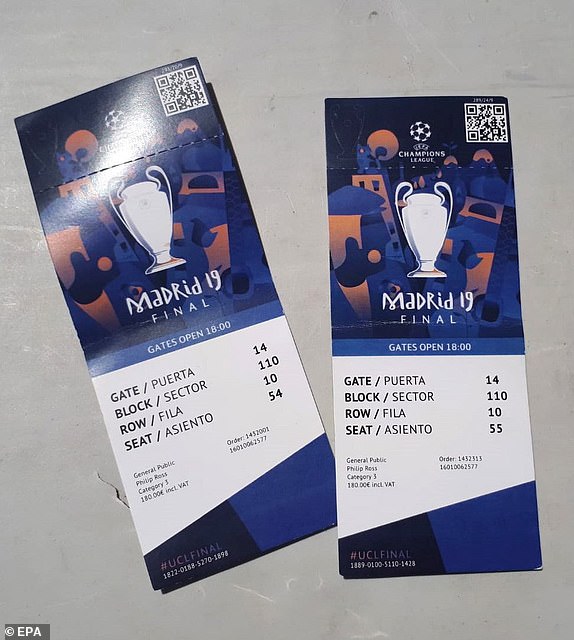 No, literally they are. Here is the team bus making the trip towards the Wanda Metropoliano. Right in the centre of shot before you ask… 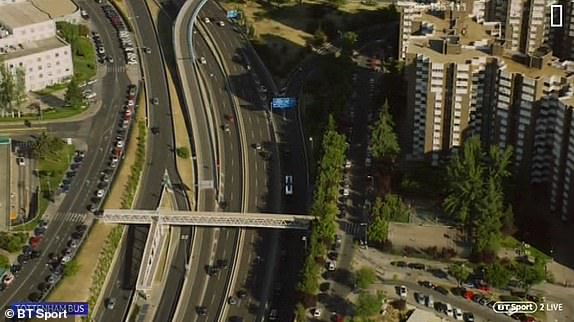 We have already heard from Jamie Redknapp, but another former star who played for both clubs is Peter Crouch and here is his take on the Champions League final. 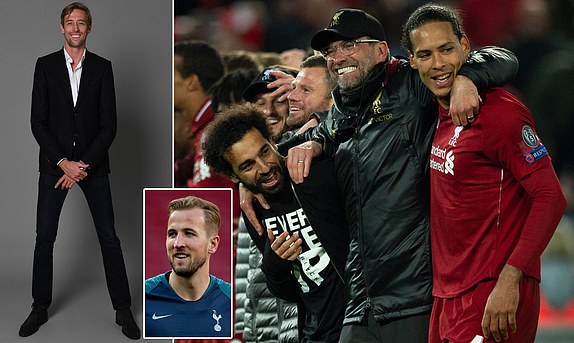 Bench him or back him? Mauricio Pochettino faces a huge call over starting with Harry Kane in Madrid

It’s arguably the biggest call of Mauricio Pochettino’s managerial career. Does he throw Harry Kane straight back into the starting line-up following injury? Or leave him out in their biggest ever game? Read more on the tough call here… 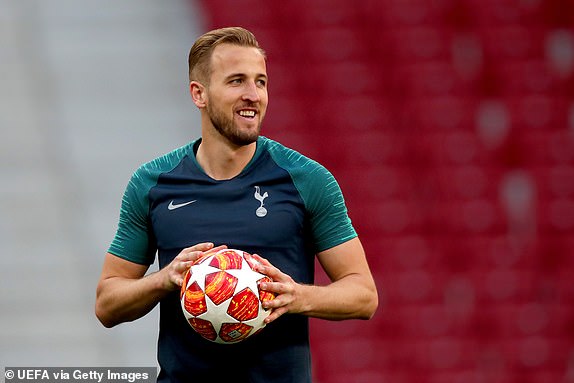 Sadio Mane to steal the show with a hat-trick for Liverpool? Arsenal fans to emigrate if Tottenham win? Our reporters make their bold predictions ahead of Champions League final

Where will the game be won and lost? Who will be the likely man of the match? What are the bold predictions? Here’s how our team of reporters assess the Champions League final. 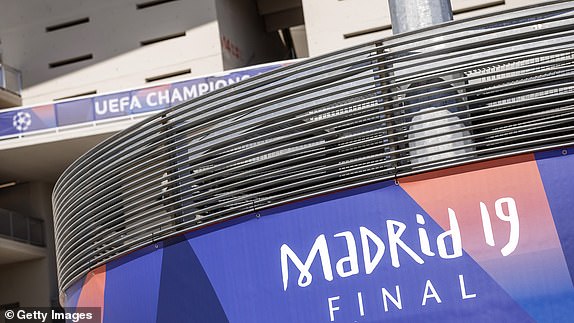 Small consolation for Spurs supporters if their side leave Madrid empty handed – just being in the final alone is set to boost the club’s financial muscle, as you can read here. 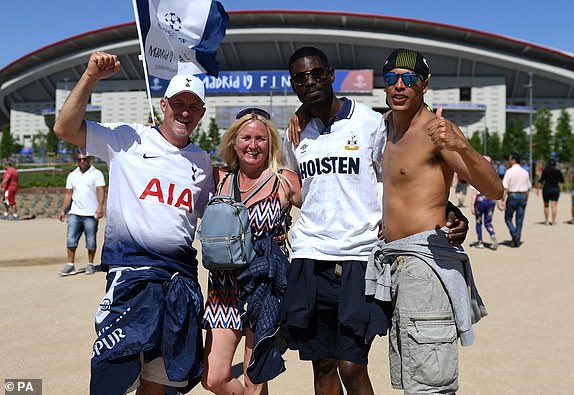 Admittedly, Bart has a peculiar tendency to pop up at any Spanish ground ahead of a Champions League encounter. Elmo though… that is a new one to me.

Bart better watch himself though, he may have a Spurs shirt but but Real Madrid shorts won’t be too popular around the Wanda Metropolitano… 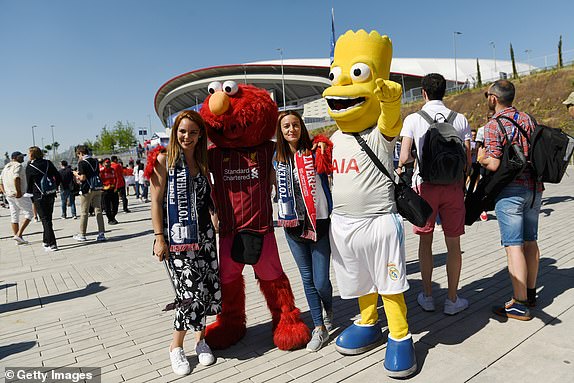 Albeit not in this competition but in the UEFA Cup, which before it was dragged through the gutter at the start of the century and renamed the Europa League was a highly prestigious competition to win.

Anyway I digress. The sides met in a two-legged semi-final, with Liverpool winning the first leg 1-0 at Anfield before losing 2-1 in the return clash at White Hart Lane.

Steve Heighway’s away goal got the Reds through though, before they defeated Borussia Monchengladbach 3-2 on aggregate in the final.

‘Hungover!’: Jamie Carragher jokes around as he is caught looking at his phone after not realising he is live on air ahead of Champions League final

Liverpool fans will be hoping their defence is much more alert this evening at the Wanda Metropolitano than their former star defender is – after failing to realise he was on air as a pundit! Watch the clip here. 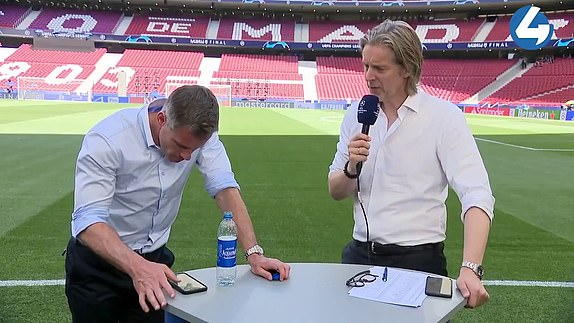 Is it a bit much to wear another team’s shirt while under contract of another? In this case Charlie Austin gets a pass from me.

Because even the Southampton striker knows there is only one show in town in the Champions League final. He is backing Roberto Firmino to fire Liverpool to glory, which you can understand as he is a boyhood Reds supporter.

At least I think he is backing Liverpool in the final… otherwise this must be the most passive aggressive ‘please sign me, Liverpool, I am better than Firmino’ pitch ever.’

Jamie Redknapp’s form guide: Roberto Firmino is like Ringo Starr in the Beatles while Mauricio Pochettino can trust Son Heung-min to step up

Who better to run you through a guide to the teams than Jamie Redknapp? The midfielder wore the colours of both sides during his career and gives the lowdown on the squads here. 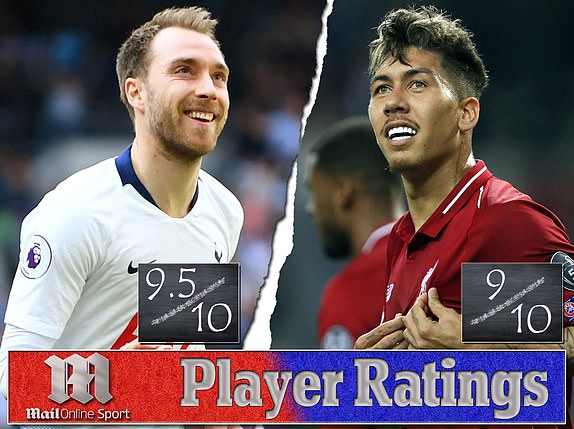 Fans from both teams are now arriving at the ground. Seems a little bit early for me, do they not know that kick off is still well over three hours away? 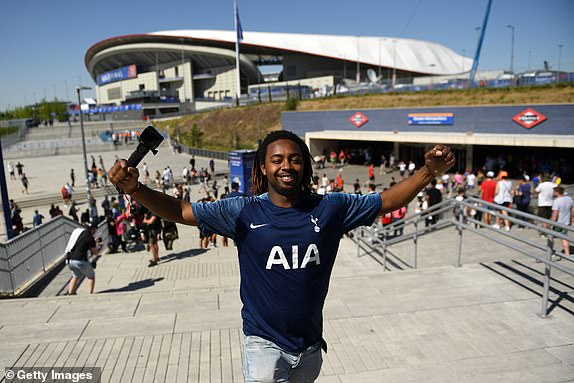 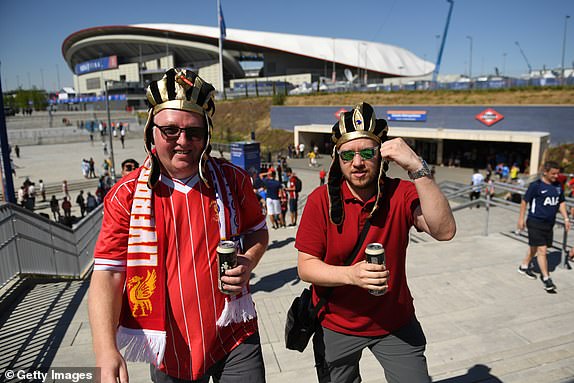 Beware, Tottenham Hotspur fans. With Spurs proving in equivalent football terms that you can do a big weekly shop in Waitrose for a tenner, Daniel Levy may have just seen justification for never getting out the cheque book ever again. Read more here. 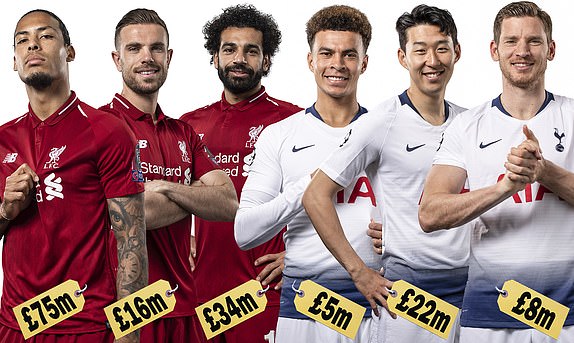 I would even accept half-half scarves for today’s fixture, but when have half-half shirts ever been acceptable on the stands of any game let alone a Champions League final? 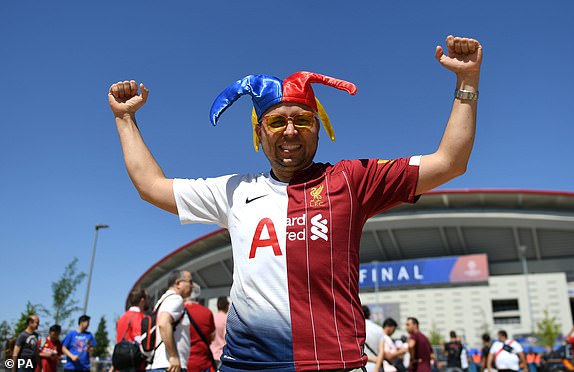 Perhaps so. When it comes to facing fellow English sides on the continent, Spurs have a 50/50 record in terms of wins, compared with Liverpool who have lost nearly two-thirds of such encounters, with this graphic from Grosvenorsport providing more. 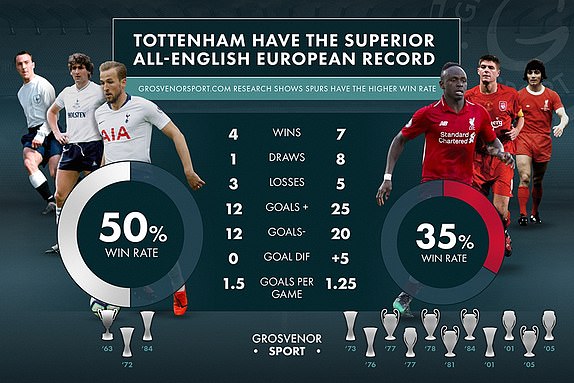 What a nightmare for a few Spurs fans hoping to make it out for Madrid – especially those with tickets as a Thomas Cook flight has been delayed by FIVE hours. More here.

It’s none other Roberto Carlos who knows Europe’s biggest prize when he sees it having won it three times with Real Madrid in 1998, 2000 and 2002. What a player he was by the way, more than just a left-back who could bend free-kicks around walls. 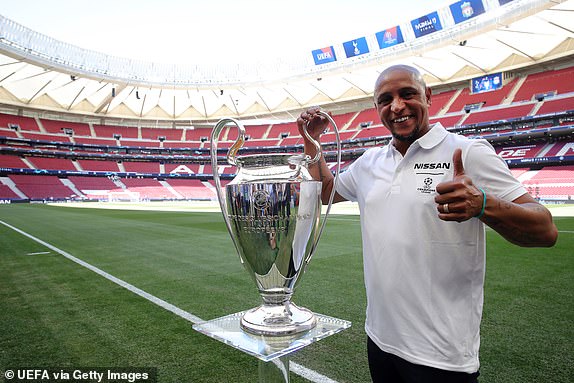 Nobody can wait for this Champions League final and that might even include the match ball – complete with both team names – which is already on the pitch waiting for the big kick-off. 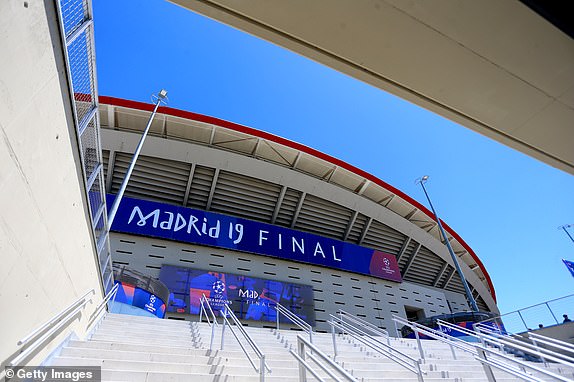 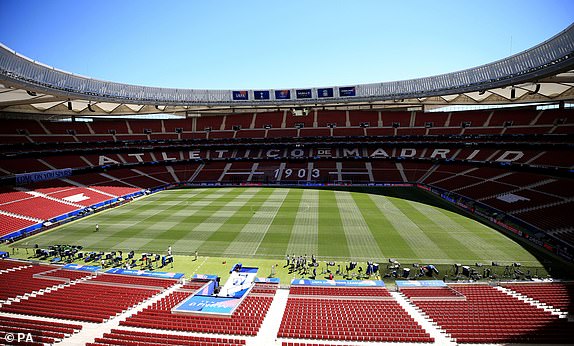 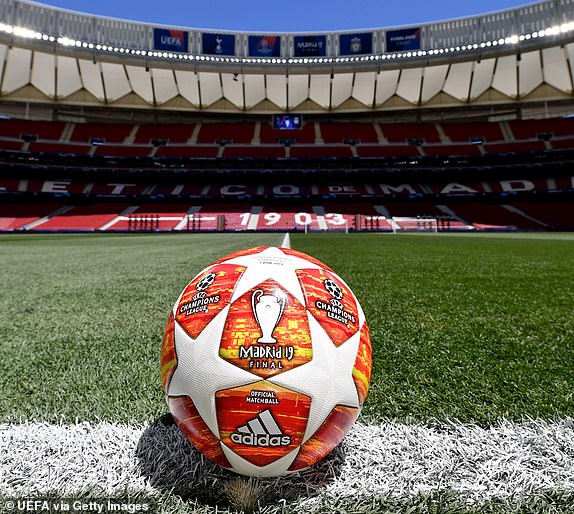 Thanks to Harry there for kicking things off, Dan Ripley now here in the hot seat to see you through to the end where either Liverpool or Tottenham Hotspur will be lifting ‘Ol’ Big Ears’.

UEFA have confirmed there will be a minute silence for Jose Antonio Reyes before kick off tonight.

The fans are out in their thousands in Madrid.

There are Klopp masks, flares and more pints than you can shake a stick at in Madrid at the moment. All in temperatures hitting 32C too.

You can see how the party atmosphere is unfolding here. 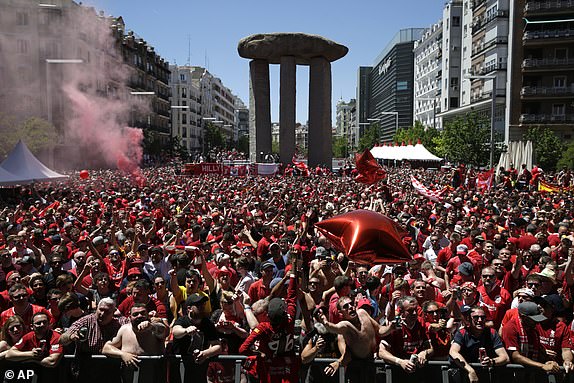 They may not have a representative in the final, but that doesn’t mean that Spain are ignoring tonight’s contest.

It’s been splashed across the sports pages in the Spanish press.

You can read what they think of tonight’s final here. 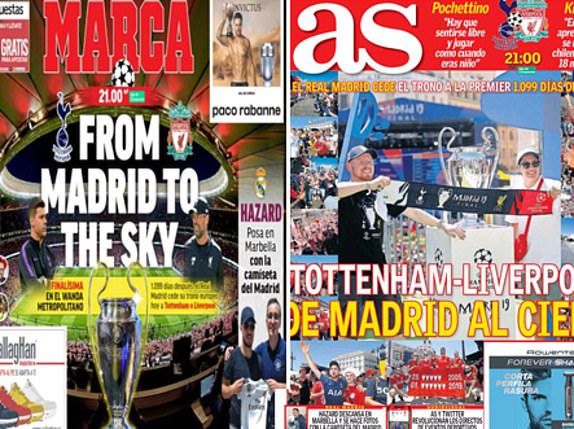 Some fans have been out in Madrid since Wednesday, and all of them are getting in the part spirit this afternoon.

Each side has their own fanzones which have been filling up this morning and this afternoon. 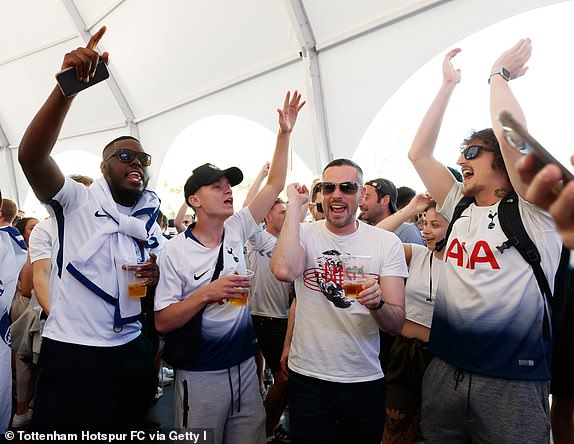 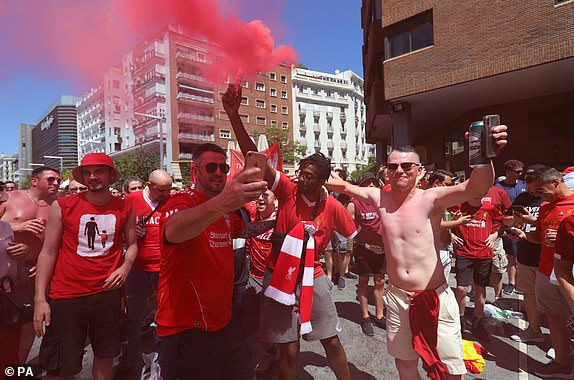 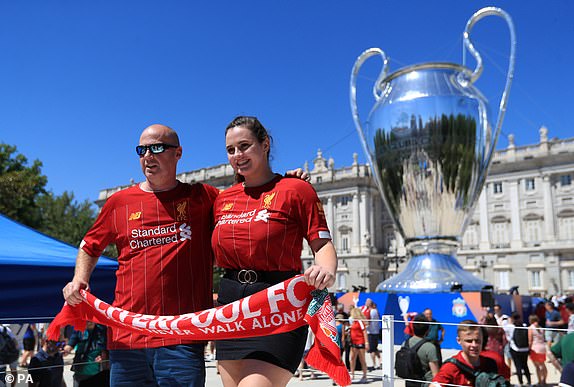 It’s finally here, the one we’ve all been waiting for.

After weeks and weeks of build up, Tottenham and Liverpool will go head to head at the Wanda Metropolitano for the biggest prize in club football.

Not since Chelsea and Manchester United faced off in Moscow in 2008 has their been as big a game in British football’s history.

We’re a long way from kick off, but the party is well underway. We’ll have all the build up ahead of the monumental clash so stay right with us.

It’s finally here – the biggest match in British football history for over a decade.

Tottenham and Liverpool will battle it out to lift the Champions League trophy – the most coveted prize in club football.

Supporters of both clubs have been flocking to Madrid over the past few days, with over 100,000 fans soaking up the atmosphere and the sun ahead of the clash at the Wanda Metropolitano.

You can follow all the build up throughout the day right here, before the action gets underway at 8pm.