Home » Sport » Two charts that show how much Federer, Nadal and Djokovic have dominated men’s tennis

Roger Federer, Rafael Nadal and Novak Djokovic have dominated men’s tennis for more than a decade and, in the wake of Djokovic's incredible effort to win the longest Wimbledon final in history against Federer, this chart shows just how much they have shaped grand slam history.

This heat map shows the past 50 years of grand slam victors:

The green bands are for Bjorn Borg, who dominated the game in the '70s, racking up 11 titles.

Borg held the record for the most modern grand slams until Pete Sampras (the dark grey lines on the chart) arrived on the scene and reigned supreme during the '90s. Sampras claimed 14 titles during his long career, the last being the 2002 US Open at age 31.

(Lots of other people have won titles but we’ve deliberately bundled them in together in the light grey patches, as the chart would turn into a eye-straining kaleidoscope of colour if we displayed them all.)

But in the past 15 years or so, it’s hard to find to find any grey in the graphic. That’s because 30-somethings Roger Federer (blue), Novak Djokovic (red) and Rafael Nadal (orange) have, between them, practically monopolised the grand slams. 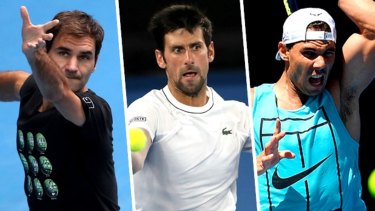 Each of them has surpassed Sampras’s tally of 14 grand slam wins – Federer now has 20, Nadal has 18 and Djokovic has 16 following his victory at Wimbledon over the weekend.

In a telling statistic for the three men, at least one of the leading trio has appeared in the semis – if not played in the final – at all of the majors since Wimbledon in 2004.

Even at the US Open five years ago, when Kei Nishikori and Marin Cilic featured in the final, they beat Djokovic and Federer respectively in the semi-finals to get there.

Of course, the so-called big three's towering influence cannot be measured by major victories alone. They have contrasting styles and strengths. Federer's grace on the court makes him popular with purists; Nadal is a master of clay but has conquered all surfaces with his power and effort; while Djokovic is cool and relentless.

All three have been part of memorable, era-defining contests. Many think the famous 2008 Wimbledon final between Federer and Nadal will never be surpassed, but this week's showdown in London between Federer – at age 37 – and world No.1 Djokovic, five years his junior, was another entry in the catalogue of classics, going to 12-games-all in the fifth set and lasting almost five hours.

All three have overcome physical hurdles to stay at the top.

Nadal's physically punishing game has taken a toll on the 33-year-old, but he won the French Open for an astonishing 12th time this year.

Djokovic had to overcome a serious elbow injury that saw his ranking plummet before he famously took out last year's Wimbledon and US Open crowns. And Federer had a gap of four-and-a-half years between grand slam titles as he battled, among other things, a back injury, before he returned to win the Australian Open (twice) and Wimbledon in the space of 13 months.

The longevity of Djokovic, Federer and Nadal is remarkable. Throughout the past 50 years, grand slams have predominantly been won by men in their 20s, but the three are all continuing to rack up titles in their 30s. And even if you downplay their influence, the average age of grand slam winners has been rising in recent years.

This second chart shows the age of the winner when they claimed the title. Red bands are for when the winner is aged 30 or older. Unsurprisingly, the big three are responsible for that cluster of red on the right.

The last time someone in their 20s won a major title was in 2016, when then-29-year-old Andy Murray claimed Wimbledon.

Federer was asked about the secret to the big three's dominance at the Australian Open in January, and how they continue to push each other forward.

"We keep ourselves in better shape, you know. We take care of our body (and) travelling gets easier than back in the '80s," Federer said.

"I think that’s just what we will see more in the future so as well – guys will play for longer. And that means domination could be longer as well.

"That means records may be broken more frequently because also the media drives the players today to break more records.

"It was really Pete [Sampras] who started that – breaking Roy Emerson’s record (12 major titles) and being world No.1 for as long as he was."

Only time will tell for how long Federer, Nadal and Djokovic will continue to dominate the grand slams.

Who knows, if we keep updating this chart maybe we’ll eventually have to add in a new colour scale for when the trio hit 40.