Some fans are even saying it shows the moment the Gypsy King stole his rival's SOUL. 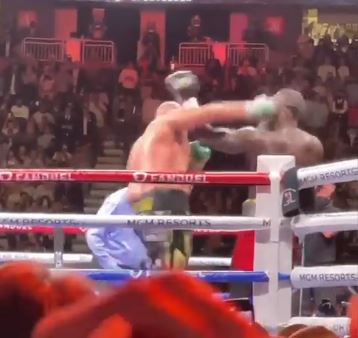 Fury dramatically settled his trilogy series with Wilder with one round remaining after a right hand sent the American tumbling to the canvas.

After the punch landed, sweat flew off the former champion's head and the referee waved off the action.

The stunning KO and epic 11 rounds was praised by fans online, who were treated to an instant classic.

One said: "Wilder’s soul went with that punch. Wouldn’t be surprised if he retires."

Another said: "That was one of the greatest heavyweight fights in history. Fury and Wilder are warriors to take those punches."

One commented: "Absolutely destroyed. You can just about spot Wilder’s soul leaving his body after the last punch if you look closely. Delicious."

After the thrilling fight, Fury, 33, attempted to make peace with Wilder, 35, but his effort was snubbed.

Ex-champion David Haye believes Wilder was not 'coherent enough' to shake Fury's hand and could have been feeling the affects of the fight.

Haye, 40, told iFL TV: “You don’t know where Wilder’s head is at. There’s so much ego, so much at stake for him. His whole life was at stake.

“I’m sure in his mind; he’s like, ‘I'm not giving you anything else, you’ve taken everything; you’ve ruined me.’

"Maybe he said, ‘I can’t even give you my hand.’ And also, he’s taken a lot of punches to the head.

There’s so much ego, so much at stake for him. His whole life was at stake. Tyson Fury has literally taken his soul. And now also Tyson Fury wants a handshake.

"You’re not going to be coherent enough to maybe shaking somebody’s hand, it's complicate.

“You don’t know where someone is at emotionally. He might have had a breakdown if he shook his hand.

“Maybe the realisation of ‘This man is better than me. Maybe he just doesn't ever want it to go to that point, I dunno.

“It would have been nice for him to shake hands and embrace him and say, ‘Yeah, you’re the better man. You beat me tonight; you beat me last time out. Good luck in the future'.