Team USA striker Alex Morgan, 32, is one of the biggest stars in women’s football, already an Olympic gold medallist and a two-time World Cup winner who will be keen to add another honour to her collection at Tokyo 2020.

Morgan first caught the eye a decade ago at the 2011 World Cup in Germany when she was the youngest player in the American squad but, undaunted by the international spotlight, scored in both the semi-final and final as the US finished runners up to Japan.

Since then, she has gone from strength to strength, shrugging off her old nickname of “Baby Horse” to be described as a “full-on stallion” by her international teammate Megan Rapinoe.

Morgan has become an icon and an inspiration to young girls around the world and is also a New York Times Best-Selling author and film star, playing herself in Alex and Me (2018), even serving with the US State Department on a diplomatic mission to Tanzania in 2017.

She has not entirely avoided controversy, however, having been kicked out of the Epcot theme park at Walt Disney World resort in Bay Lake, Florida, in October 2017 along with a group of friends said to be “highly impaired” and “verbally aggressive”, an incident for which she swiftly apologised. 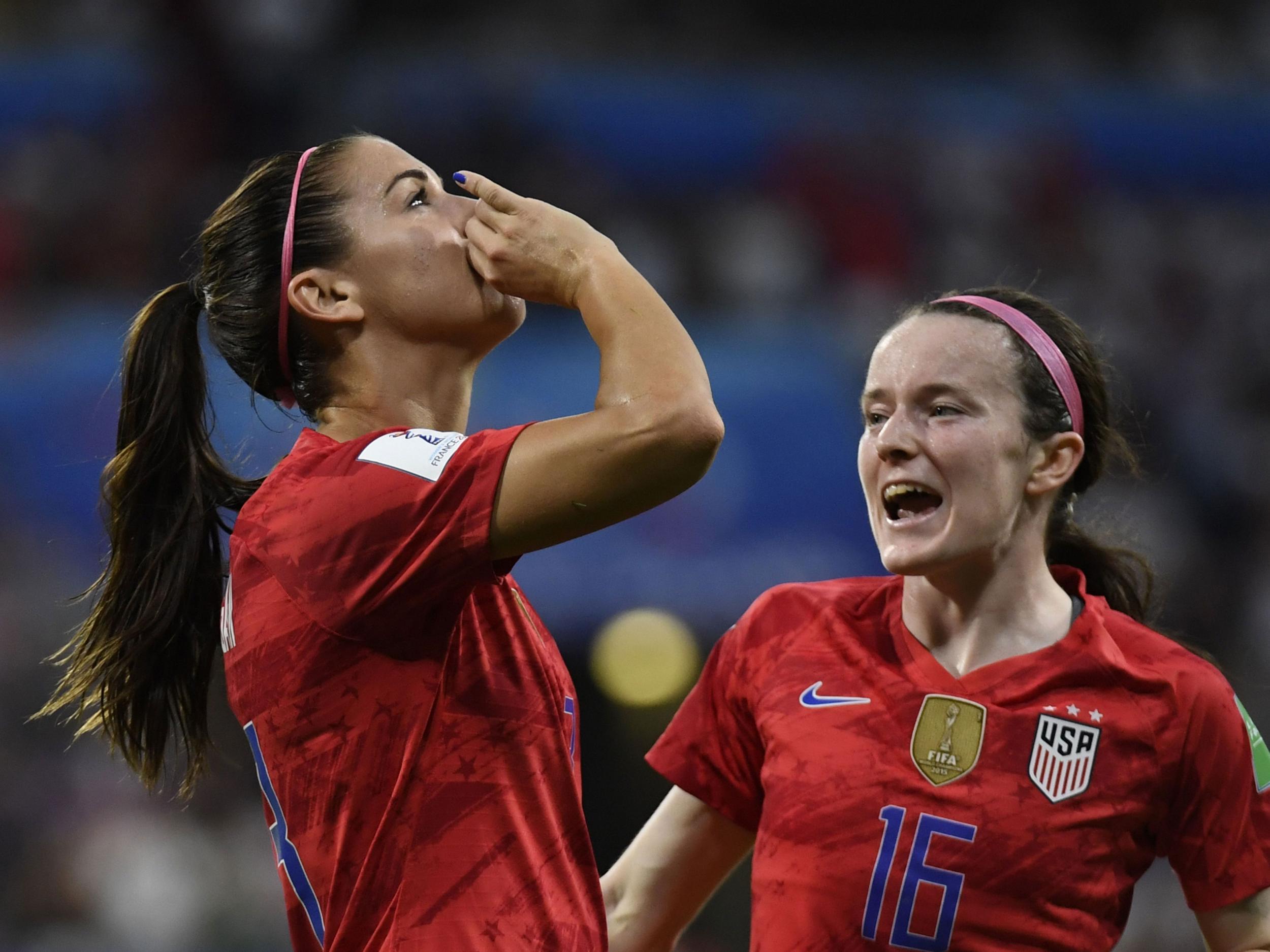 Morgan also raised eyebrows at the 2019 World Cup in France when she scored against England in the semi-final and celebrated with a tea-sipping celebration, appearing to mock her opposition, although she has since claimed the gesture was misunderstood.

Born in the California suburb of Diamond Bar near San Dimas on 2 July 1989, Morgan was a multi-sport athlete known for her speed at high school and did not begin playing football exclusively until she was 14 and joined local club side Cypress Elite.

She was soon playing for the Olympic Development Program’s regional and state teams as well, which she credits as integral to her development, and was called up to the US under-20 women’s team at 17, only for an anterior cruciate ligament injury to set back her progress.

Morgan subsequently attended UC Berkeley, taking a degree in Political Economy while playing for the California Golden Bears from 2007 to 2010, finishing her college career with an impressive haul of 46 goals.

Turning professional in 2011, the same year she announced her arrival at the World Cup, Morgan played for Western New York Flash, before moving to Seattle Sounders for a season, where she played with international teammates Hope Solo and Rapinoe, before being transferred again and spending two years with Portland Thorns FC.

In 2015, she joined Orlando Pride in Florida, where she has been even since, barring short spells with Lyon in France in 2017 and Tottenham in England last season, where she made just four appearances but scored twice as she continued her return to match fitness after taking time away from the game to give birth to her first child, a daughter, Charlie Elena Carrasco, on 7 May 2020. 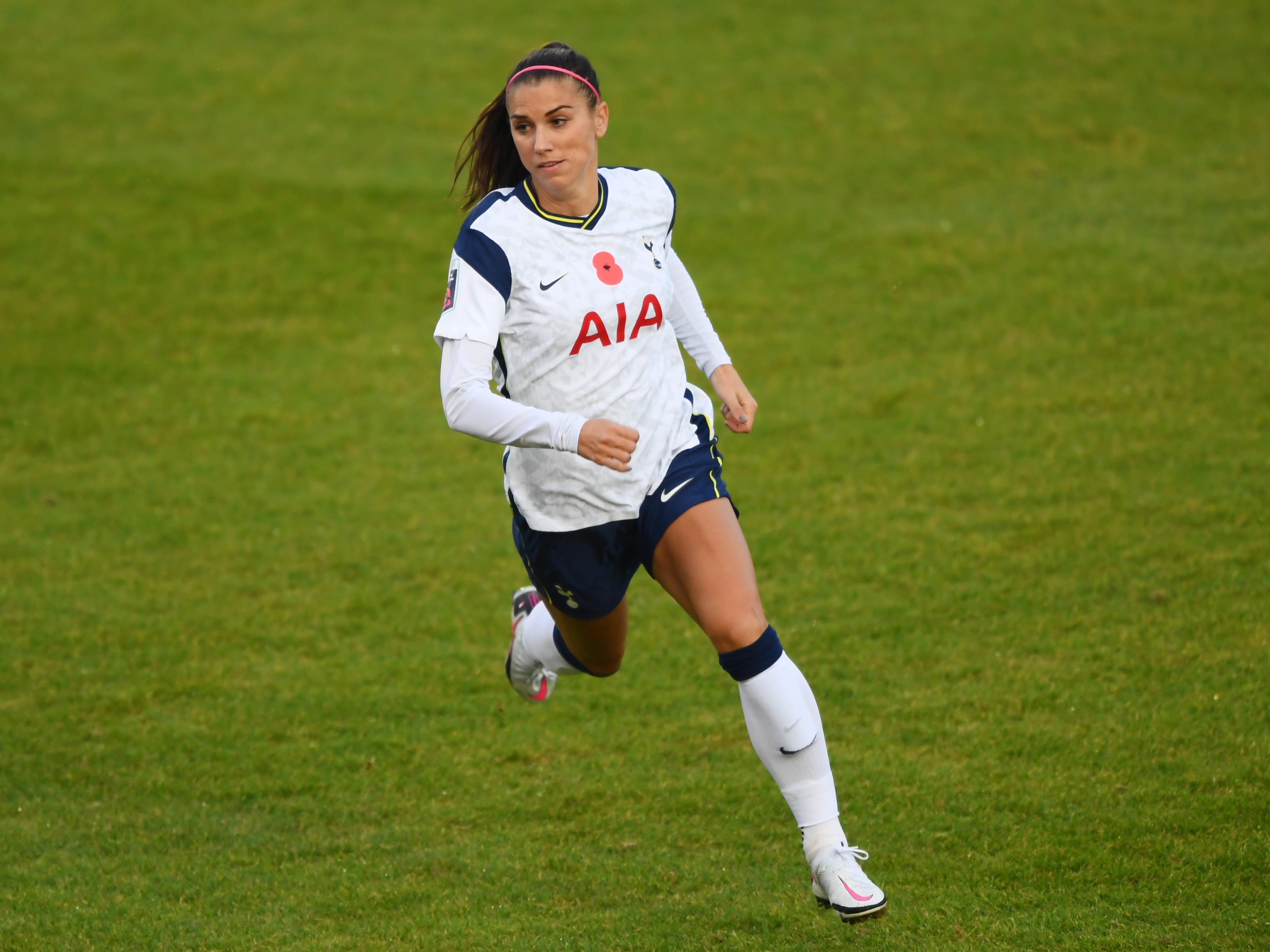 Alex Morgan in action for Tottenham

Her husband, Servando Carrasco, whom she met at university and married in 2014, is also a footballer, currently playing as a defensive midfielder for Fort Lauderdale FC.

At club level, Morgan has scored 65 goals in 146 appearances, but it is on the world stage where she has consistently shone, bagging 110 in 181 games, as well as 44 assists.

But with the US losing their first group game in Japan 3-0 to Sweden, she and her teammates will need to be at their very best if they are to win gold again in Tokyo.