For an instant on Sunday night, as Logan Paul stood in a boxing ring across Floyd Mayweather Jr., the best boxer of this generation, television cameras and microphones captured his astonishment.

“This is crazy,” Paul, the social media star, said as his name was introduced before his eight-round exhibition at Hard Rock Stadium in Miami Gardens, Fla., against Mayweather, who will enter the Boxing Hall of Fame later this month.

Against most expert predictions, Paul, 26, lasted the entirety of the fight without falling to the canvas. No winner was announced because there were no judges. But Paul crowed afterward that he did something that many people would have thought was improbable.

“I don’t want anyone to tell me anything is impossible ever again,” Paul said in his post-fight interview. “The fact that I am in here with one of the greatest boxers of all time proves that the odds can be beat.

“I’m going to go home thinking, ‘Did Floyd let me survive?’ He’s one of the GOATs, and in many ways he controls this sport to a T. That’s what makes him great. It’s an honor to grace the ring with him.”

The spectacle pitted Mayweather, 44, who won all of his 50 professional fights, against Paul, who earned the fight not through any meaningful boxing experience, but because of a large social media following. Boxing purists viewed the event as a circus. But it drew massive interest, even overwhelming Showtime’s ability to stream the broadcast at a selling price of $49.99 per customer.

The bonanza aligned with a persistent theme for combat sports right now — the debate on how to consistently elevate fights into the mainstream consciousness. In doing shows like these, promotions demonstrate that they are willing to appease the masses. And it may become the most-used strategy as the sports and their stars evolve.

Mayweather retired in 2017 after dispatching Conor McGregor, an Ultimate Fighting Championship star boxing professionally for the first time, in another fight that also seemed unlikely at first but materialized because of the fans’ interest. U.F.C. President Dana White initially shrugged off the idea of matching the two together by putting a mixed martial arts fighter in a regulated boxing match. But he slowly adapted, and soon sat next to McGregor while he trash-talked at news conferences during an international media tour.

Mayweather began boxing at age 19 and needed only two years to win his first title. Since then, he has become the sport’s biggest draw, earning a massive net worth as one of the world’s highest-paid athletes. He claims to have earned $1.2 billion in his career.

That stardom drew in Mayweather, nicknamed Money, who reached boxing’s pinnacle by making any event he headlined a potential blockbuster. Through Paul, the opportunity presented itself again.

Mayweather viewed Paul as easy prey, and equated the incoming payday as a “legalized bank robbery.” Add the fact that the result would not count against his official record, and it made sense for him to briefly exit retirement for a quick night of work, he said.

“For me to be retired, to be a grandfather, and to come have some fun with a guy that is in his 20s, when the money comes, we’ll see who’s the real winner,” Mayweather told reporters. “At the end of the day, I am going to the Hall of Fame for boxing. I have nothing to prove.

“When I come and do an exhibition or come out and box and have some fun, I do it because I want to do it, not because I have to do it.” 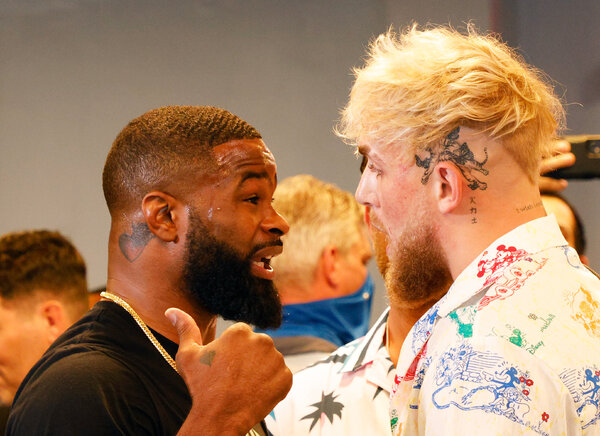 But for its sustainability, boxing can no longer cling to Mayweather and his celebrity. He acknowledged that his performance Sunday may not have been on par with those earlier in his career, and he dismissed the notion of returning to a professional fight (he also downplayed the chances of a future exhibition).

Arriving in his absence are Paul and his younger brother, Jake, who have seized the opportunity to perform in unconventional ways. Logan Paul, who lost in a split decision in his only professional fight two years ago, said he intends to keep training seriously as a boxer.

In recent fights, Jake, 24, knocked out the former N.B.A. player Nate Robinson and the mixed martial artist Ben Askren. He has since signed a multi-fight deal with Showtime and announced his next opponent, the former U.F.C. champion Tyron Woodley.

Other fighters have raised their hands, too. Adrien Broner, a veteran boxer with over 30 professional fights, said Sunday he would knock both brothers out. On Sunday, Logan Paul said he anticipated he would have a group of suitors.

“I’ll be putting on prizefights,” Paul said. “I’m sure there’s a list on Twitter, people saying this, saying that. I’ll pick one.”

The pattern of shaking established norms doesn’t seem to be fading soon. White, the U.F.C. president, reportedly blocked a potentially lucrative boxing match between the U.F.C. legend Georges St.-Pierre and the boxer Oscar De La Hoya. St.-Pierre, 40, said it would have been a “dream come true” to fight De La Hoya, 48, who is one of his favorite boxers.

Logan Paul, who wrestled in high school and repeatedly clinched against Mayweather, also suggested participating in a mixed martial arts fight because of his wrestling background. He said he and his brother were being held to a high standard because of their social media success, but he hoped to meet that level as they adjusted to becoming athletes.

And as the lines continue to blur within the combat sports community, he said he was happy to be at the forefront.

“Anytime I can entertain, I’m happy,” Paul said. “I just love entertaining and making people happy with the stuff I love doing.”