Home » Yankees Finally Get Past Rays With Four-Run 10th

ST. PETERSBURG, Fla. — Rougned Odor snapped a 10th-inning tie with his first hit as a Yankee, Gio Urshela homered and drove in three runs, and the Yankees rallied Sunday to avoid a weekend sweep with an 8-4 victory over the Tampa Bay Rays.

Urshela hit a two-run homer in the third inning. His fourth hit of the day, a two-out single in the 10th off Collin McHugh (0-1), helped the Yankees put away the defending A.L. champions, who were on the verge of completing a three-game sweep before giving up a tying run in the eighth.

Odor was in the lineup for the first time since being acquired in a trade from the Texas Rangers. Cleanly shaven after sporting a scruffy beard for years in Texas, he was 0 for 4 before singling to center on a 3-2 pitch to break a 4-4 tie. Gary Sanchez followed with an R.B.I. single before Urshela finished off the Rays, who allowed the fourth run of the inning to score on an error.

Mike Zunino and Randy Arozarena hit two-run homers and rookie right-hander Brent Honeywell Jr. sparkled in his major league debut by pitching two scoreless innings as an opener for the Rays, who clung to a 4-3 lead until Gleyber Torres tied it with an eighth-inning single off Ryan Thompson.

Zunino and Arozarena both homered off starter Jordan Montgomery, who riled the Tampa Bay bench early in the game by hitting Rays designated hitter Austin Meadows with pitches twice.

Home plate umpire Marty Foster issued a warning to both benches after Meadows was struck in the back in the first inning. The umpire crew huddled again when a high, inside pitch appeared to glance off Meadows’ left forearm, however Montgomery wasn’t ejected.

Before Sunday’s game, the Yankees announced that they had traded infielder Thairo Estrada to the San Francisco Giants in exchange for cash considerations. Estrada, 25, spent parts of the 2019 and 2020 seasons with the Yankees. He had originally signed with the team as an amateur free agent in 2012. 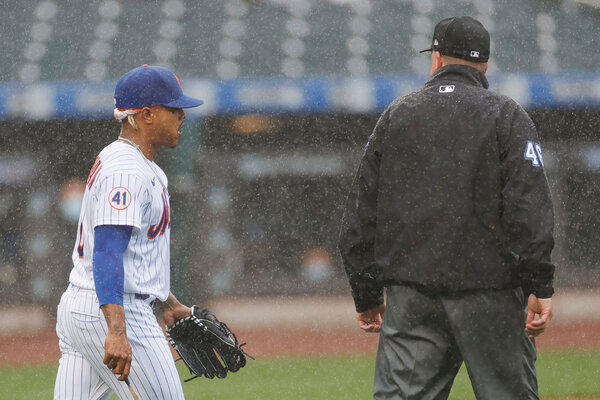 Marcus Stroman criticized the Mets for starting Sunday’s game against the Miami Marlins in a steady rain. Stroman’s outing lasted just nine pitches before play was stopped, and the game was suspended after a wait of 2 hours 10 minutes, to be continued as part of a day-night doubleheader on Aug. 31.

“This game should have never been started. Not smart at all,” Stroman tweeted during the delay. “Those conditions put everyone at risk. Beyond happy no players on either side were injured. Hate that I have to wait another 5 days to pitch again. That’s a miserable feeling.”

The Mets, known for confusion at times under the Wilpon and Katz families, were bought during the off-season by hedge fund billionaire Steven Cohen, who brought back Sandy Alderson as team president.

“That’s how Stro is, is outspoken. He’s open, talking and he says what he feels,” Mets Manager Luis Rojas said. “He did not share anything this morning. He gets ready. He was doing his routine. He was just waiting for the communication, whether we were going to start on time or not.”

Rojas said Mets ballpark operations staff consulted with weather services, and he was the one who told Stroman the game was starting on time. Stroman was not made available to reporters after his brief outing.

There were about 1,000 fans in the seats when the game began, and by the time Jesus Aguilar of the Marlins walked up to the batter’s box, the infield dirt was shiny and slick from water. The game was stopped after a pair of splitters in the dirt left a 2-0 count on Aguilar.

“The field got out of hand quick,” Marlins Manager Don Mattingly said. “If they thought it was going to be like that, I don’t think they would have started.”