Adil Ray OBE and Susanna Reid interviewed Thérèse Coffey on Good Morning Britain on Tuesday. The MP was there to speak about her new Kickstart scheme but the presenters wanted to discuss the accusations against Boris Johnson in regards to the comment “Let the bodies pile high” – which the Prime Minister has denied saying. Earlier on in the show, Robert Peston said he had two “ear witnesses” who were willing to swear “under oath” about what they heard.

Reid began: “You’re in a position as a Cabinet Minister, a member of the government, where you have to believe the Prime Minister.

“So despite the fact there are at least two sources – according to our political editor – who say they would be prepared if asked, under oath, they would speak out on what they heard, and they say they heard him [Boris Johnson] say those precise words, you are saying ’They’re wrong, they’re the ones who are lying, the Prime Minister is telling the truth?’”

The MP replied: “Yes I trust the Prime Minister.

“It’s been nearly 18 month since the election, we have set out in government what it is that really matters to people; first of all delivering Brexit then having to deal with the coronavirus pandemic – this global pandemic – and we’re responding to that with trying to help people keep their jobs but also extra support for people trying to get back into work.” 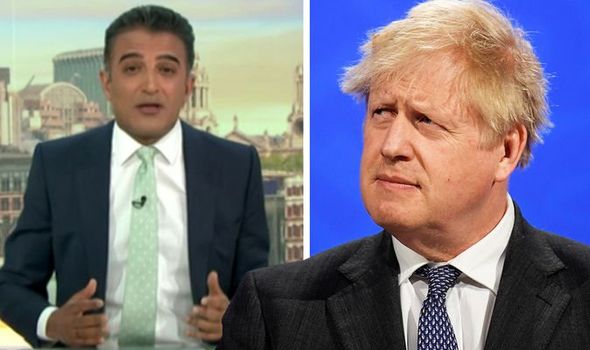 The presenter continued: “It’s interesting, because yesterday, your colleague Michael Gove spoke in the House of Commons and he didn’t say that the Prime Minister didn’t say it.

“He said something different – let’s have a listen to his words.”

GMB viewers saw a clip of Gove, who was heard saying: “The idea that he would say any such thing, I find incredible! I was in that room, I never heard language of that kind!”

Reid continued: “So he said he found it ‘incredible’ and he ‘never heard language of that kind.’ 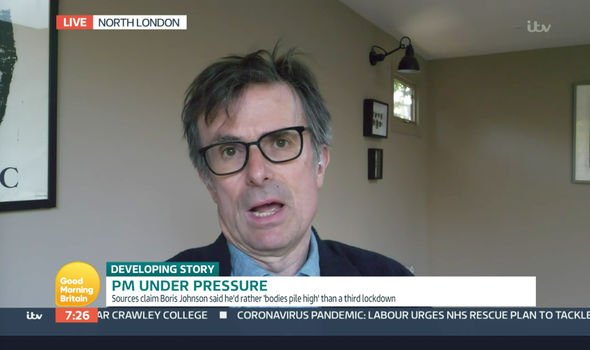 “He didn’t say he [Boris Johnson] didn’t say it, he chose his words quite carefully according to political analysts.”

Later on in the show, Ray said to Coffey: “Some people are calling it corruption at the heart of government.

“We now have accusations of things he’s said, even if he haven’t said it, the fact people are claiming they were in the room and heard him say it and in that case, lie, to credible political editors, I mean that is the issue.

“You want to talk desperately about Kickstart campaign, but we can’t do that, because right at the very top, you have a Prime Minister who is hijacking the headlines with such negativity. 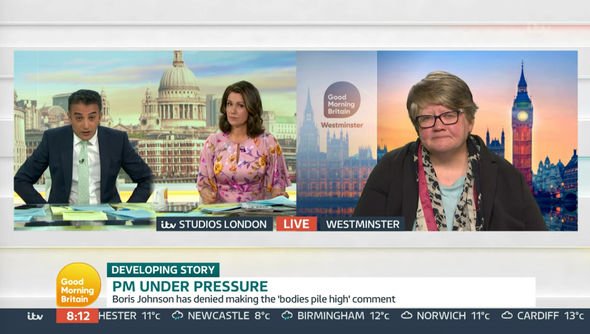 “That is the problem isn’t it, and how can we move on from the?” he asked the politician.

Coffey replied: “The government doesn’t decide what broadcasters or newspapers want to write about.”

Those watching at home were divided, one said: “You can’t guarantee he didn’t make those comments Dr Coffey #gmb.”

“Incredible effort by Therese Coffey to avoid answering any questions about Johnson and twist every response to peddle the party line on #GMB. That they can’t and won’t address the topic is pretty conclusive imo,” someone else argued.

Another wrote: “Going on about something that was probably not said  #gmb.”

“#GMB bashing the government again!!! Makes me mad. Look where we are compared to many other countries. Get rid of these terrible presenters. Clearly believe everything they are told just so they can accuse again,” a tweet read.

Johnson is set to chair a cabinet meeting later as he attempts to shift the focus from a series of claims and questions over his conduct.

He and Number 10 have strongly denied he said the phrase and the Prime Minister has described the multiple reports as “total rubbish”.