Over the years, several rare items have been brought along to the Roadshow, some have been given incredible valuations while others have fallen short if they have been restored. During series 39 of Antiques Roadshow which visited Tewkesbury Abbey, expert Hilary Kay took a closer look at an incredibly rare 18th-century dress. But how much was it worth?

“Looking at this dress, I can picture the scene; one misty morning, a woman walking through the Abbey meadows. It’s wonderful. Is it a family heirloom?” Hilary asked and the guest replied: “No, no.”

“So what is it?” The expert probed.

“It was given to me by a friend in the 1960s and she just gave it to me, I just had a daughter and I think she might be interested later on to dress up in it,” the owner explained.

“And did your dress up in it?” Hilary remarked. 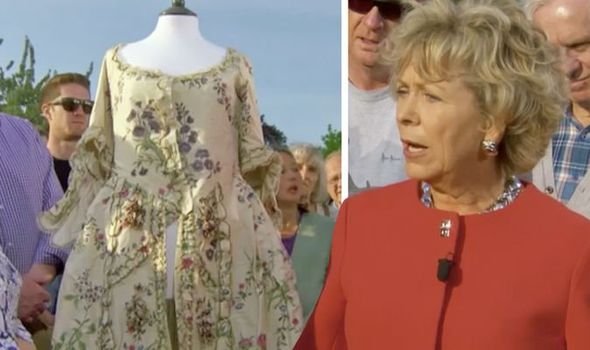 We will use your email address only for sending you newsletters. Please see our Privacy Notice for details of your data protection rights. Antiques Roadshow guest snaps at expert over valuation

“No, it’s never been touched. I’ve never seen it out,” the guest confessed to Hilary.

Shocked by her admission, Hilary replied: “You’ve never seen it out? This is the first time you’ve actually seen it? How do you think it looks?”

“Very nice. It’s beautiful,” the lady said and then revealed she kept it “in a box or in a drawer”.

Hilary then took a closer look at the dress and explained: “Well, lets talk about what it is.

“It’s what known as a sack back robe, people might say it’s in complete, it’s got an open front. Well it was an open robe and you would wear a very beautiful – you call them petticoats but it was an underskirt really. 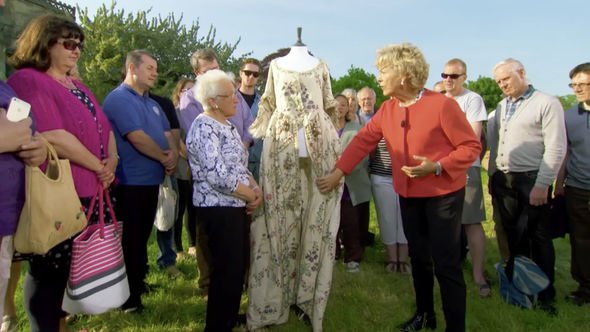 “And of course, you would have had wide hoops underneath all that to give you that wonderful silhouette.

“And if you can imagine wearing this, and in the candlelight of the 1760s or the 1770s – which is when it dates from – how that would’ve glistened and sparkled, and you would’ve seen shadows down the side of the dress, it would’ve been quite extraordinary,” she continued.

“And so this fabulous painted silk would’ve been imported to Europe to be made into this dress, here in England. 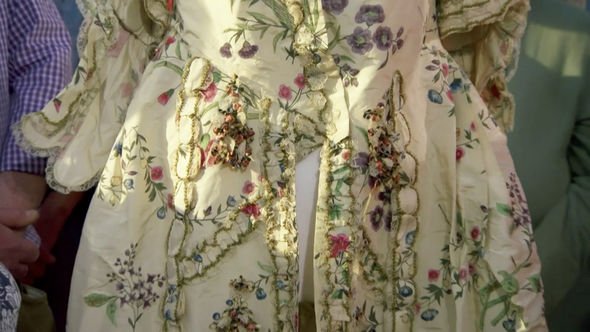 “The decorations on it are also rather wonderful. You’ve got at the front here these little dangling hassles and then down each side you’ve got raised pockets almost, which have got a little piece of wool inside, a bit like a piece of cotton wool, but it’s real wool inside this panel here to give it a 3D view,” she told the lady.

“What I’d like to do, if the breeze will allow us, I would just like to turn it around, gently and we can see the back here which gives it it’s other name – the sack back robe.”

BBC One viewer saw Hilary turn the dress around so she could examine the details the back of the gown had to offer.

Hilary said: “You’ve got pleats running from the shoulder blades, box pleats, running all the way down to the bottom which gives it a sort of train effect. 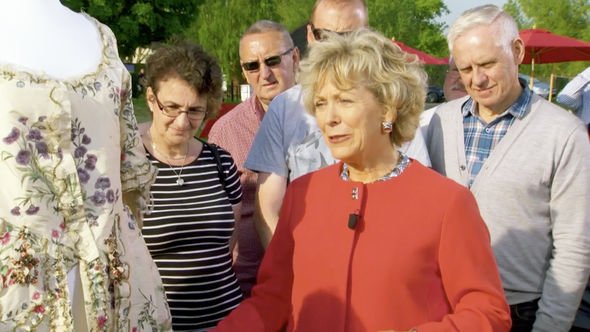 “So, when you wore this, you were making really quite a statement.

“What I also like very much is these scalloped edges, particularly on the sleeves here.

“When one looks at a dress like this, one has to appreciate this is an extraordinary survivor. Painted fabrics are notoriously difficult to keep and the fact that it’s been kept in a box for so long, would perhaps explain why it hasn’t just fallen to pieces which is so often the fate.

“It’s beautiful, it’s a lovely design and perhaps more importantly, a dress like this is of huge demand internationally by collectors and museums.

“This is for a major museum somewhere in the world.”

But how much would the dress fetch if the lady decided to sell it?

Hilary revealed: “And what was just a present from a friend is now going to be worth something around £40,000.”

Overwhelmed by the price tag, the owner said: “Don’t tell my granddaughter that! I can’t believe that.”

Antiques Roadshow is available to watch on the BBC iPlayer now.