ASTERIX: THE SECRET OF THE MAGIC POTION

The name is le Gaulois. Asterix le Gaulois. It may seem a long bow, but Asterix is a bit like James Bond, only 2000 years older. He first appeared in 1959, when James Bond books were already in their heyday, and both are to some extent a product of World War II.

Julius Caesar may have come and seen, but he did not conquer this little corner of Gaul, because these people are indomitable. Asterix as warrior-in-chief is small but wily, quick to draw his sword. Obelix, his fat friend, may be dim-witted but one blow from his mighty mitt and phalanxes of Romans see stars.

Coming 14 years after the routing of the Germans, Asterix fitted into a powerful and growing fiction in postwar France that everybody and his dog had been in the Resistance, too. 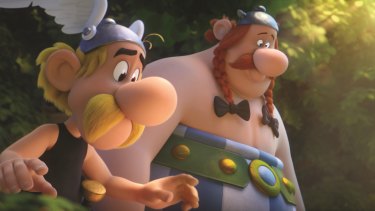 Asterix and Obelix in Asterix: The Secret of the Magic Potion.

In the Asterix books, the resistance actually does include the dog, known to the French as Idefix ("idee fixe", get it?) and to us at Dogmatix, Obelix’s faithful offsider.

The problem with my theory is that it cannot explain why Asterix is so successful outside France. There have been 38 official Asterix books. A new edition arrives every year or two, long after the deaths of his two creators, Rene Goscinny and Albert Uderzo.

This is the 14th film, not to mention the 40 video games, a theme park and Asterix’s name on the first French satellite, launched in 1965.

I guess it’s because the books are funny, charming and full of physical humour of the Fatty and Skinny sort. When combined with the idea of resistance, they offer a storyline that any child can understand in any part of the world – except they were not written for children.

When the strip appeared, French and Belgian audiences understood that this strip was aimed at grown-ups. It was part of the fast-growing art of "bande dessinee" (illustrated strips) that now has a huge following in France and Belgium.

Some of that grown-up humour remains in this latest film, which arrives as a 60th anniversary celebration. It’s a computer-generated animation, as opposed to a live-action film, so there is no sign of Gerard Depardieu wearing a barrel.

The humour is layered – from the pratfalls in which Obelix crushes those he falls on, to in-jokes, such as the Roman senator, a crashing bore, who’s known as Tomcrus. There’s even a joke in Latin, which pretty much defines the difference between this and an American animated adventure. Note the PG rating.

The plot is classical: Getafix, the oddly named village druid, feels he is getting too old. He must find a new apprentice, to whom he can teach the secret of the magic potion, the drinking of which turns ordinary Gauls into Roman-bashing super-Gauls.

Asterix, Obelix, the dog and one or two others follow the old man on a quest to find a successor. Another druid wizard, an old rival, tries to thwart them at every turn, leading to a big fiery finale back at the village, surrounded by a Roman legion.

The films have always been more kid-oriented than the books and this one won’t frighten the school-age ones, although it might raise a few hairs on those younger.

Adults might enjoy the knowing glimpses of the real world – like the scene where the villagers sort out their differences with an all-in brawl.

That’s part of the appeal of Asterix: he is more human than anything Disney would sanction. Except for the magic potion, this series takes place in our world, more or less, with all its shortcomings.

These Gauls know how to live, with good food and wine, but they also know how to fight. They’re not so great at government, but of course, that’s not at all like modern France.