Priti Patel joined Charlie Stayt and Naga Munchetty via video link on BBC Breakfast today to face questions about the Washington DC protests and President Donald Trump’s response as well as the new lockdown measures that are in place in England to stop the spread of coronavirus. However, when BBC presenter Stayt turned his attention to face coverings and the fines which can be implemented to those who fail to adhere to the guidelines, Ms Patel was left less than impressed with his line of questioning.

The spat came when Stayt put a question from a BBC Breakfast viewer to the Home Secretary.

He quizzed: “Simon’s got in touch with us this morning, lots of people have lots of questions,

“He wanted us to ask you when are you finally gonna crack down on rulebreakers who openly defy the law by not wearing a face-covering in supermarkets and public transport?

“Now I know you mentioned moments ago they would be quicker to act. Let’s look at a scenario.” 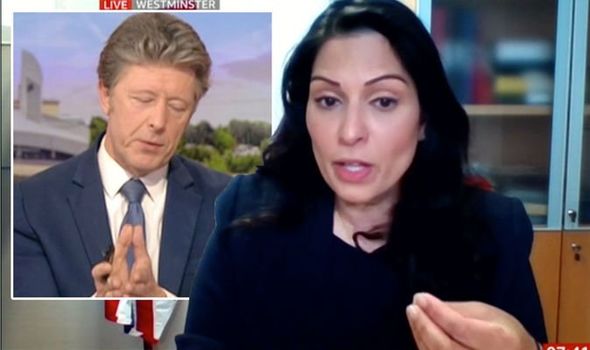 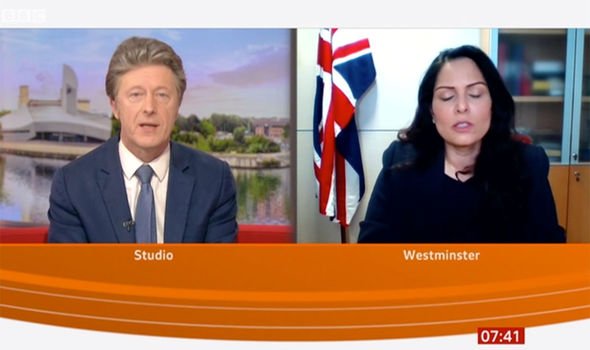 Charlie then reeled off a hypothetical situation in which someone isn’t wearing their face covering but doesn’t have the relevant documents on their person to explain their exemption.

The BBC Breakfast host quizzed Ms Patel on whether the police should then take their details to be followed up on to prove why they weren’t wearing one.

Ms Patel responded: “Well, I think, first of all, you’re speaking about a hypothetical situation about someone that could be outdoors.

“Unless we know the specific individual circumstances, the police will always exercise their judgment, the police are exceptional at exercising their individual judgement based on the guidance which has been issued to police forces. 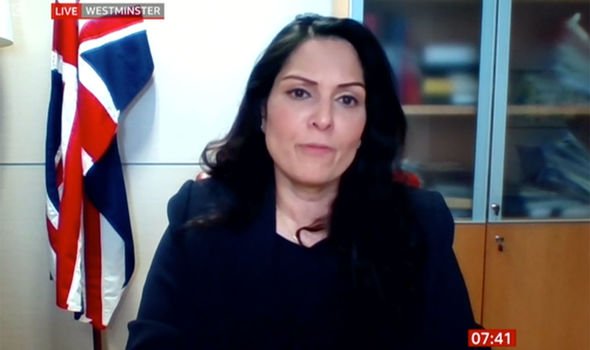 “However, you’ve also mentioned about not wearing face coverings in supermarkets, now that is completely wrong.”

Ms Patel went on to say how the Government is working closely with supermarkets to ensure this doesn’t happen, but Stayt was keen to try and pull the MP up on the point.

Stayt interjected: “But you’re talking about the business, aren’t you? What I was curious about was the individual. Is the approach now going to be: charge first and then explain it if you can at a later date -“

Unimpressed, however, Ms Patel quickly shut Stayt’s line of questioning down as she jumped in: “No, Charlie. The answer’s no.

“You’ve heard me say already, the police will exercise their judgement based on the conversation with the individual.”

Ms Patel outlined once more the possible fines the police have at their disposal to ensure rulebreakers are punished.

Elsewhere in the chat, Ms Patel condemned the scenes of violence which unfolded in Washington DC, USA, yesterday after Trump supporters entered the Capitol Building.

Ms Patel insisted President Trump was “wrong” for failing to condemn the violence as well as being responsible for inciting the disturbing scenes.

“His comments directly led to the violence and so far he’s failed to condemn that violence and that is completely wrong,” she told Stayt.

It has been reported four people have died following the protests and riots at the Capitol yesterday.

After protestors had entered the building yesterday, President Trump had told them to “go home peacefully” before adding he “loved” them all.

BBC Breakfast continues daily at 6am on BBC One.