Casualty was set to air at 8.20pm last night, with viewers tuning in to see the latest developments with Iain Dean’s (played by Michael Stevenson) mental health storyline.

The long-running plot is set to conclude in the coming weeks as Iain actor Michael Stevenson, 36, takes a break from the drama after six years in the role as the Holby City paramedic and last night’s episode was set to show a big turning point in the story.

Coverage from Wimbledon was supposed to have wrapped at 7.35pm but with Andy Murray’s mixed doubles match with Serena Williams, 37, overrunning, BBC quiz show Pointless Celebrities was also taken off the schedule.

However, viewers weren’t too happy with the continuous sports coverage and have since taken to social media to voice their discern at the latest episode not airing.

“I went to watch last night’s episode of #Casualty that I had recorded, only to find I had recorded an hour of Wimbledon coverage instead! Where was Casualty???” one fan wrote on Twitter.

Another added: “So went to watch #Casualty this morning and seen it recorded the tennis and twitter let me know they cancelled it why does this always happen it’s so frustrating @BBCCasualty @BBCOne.”

A third wrote: “Come on, BBC, first you mess with Holby and now Casualty. We’re not all sports fans, if tennis is so flaming important, put Casualty on BBC 2 but tell us what’s going on!”

Whilst a fourth shared: “@BBCCasualty we want #Casualty and we want to be able to watch it without it being cancelled for sport all the time.”

The schedule change was unprecedented as the official Twitter account for Casualty was teasing the episode, tight up until 10 minutes before the latest episode was set to broadcast.

BBC have since responded to the schedule mixup and in response to a fans tweet, the official Twitter account for BBC One posted: “We’ll be showing it next week instead.” 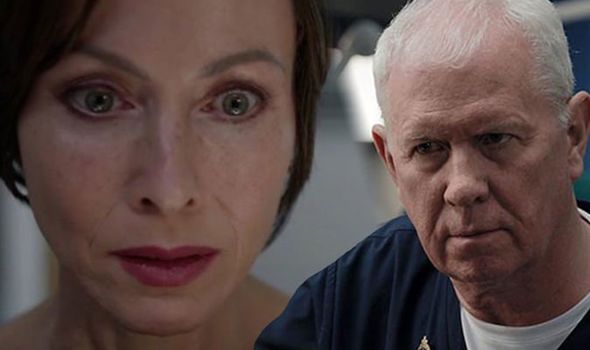 This isn’t the first time this week a BBC medical drama has been removed from schedules to make way for sports coverage.

Casualty’s sister show, Holby City, was replaced by the Fifa Women’ World Cup coverage on Tuesday and the next episode of the medical drama is set to air in its usual time slot in the coming week.

Fans will have to wait another week to see the aftermath of Omo Masters’ (Ellen Thomas) death after the mother of staff nurse Jacob Masters (Charles Venn) died last week.

After his mother passed away in his arms, Jacob could be seen putting the contact details of his estranged father over a naked flame, with the piece of paper seen burning away.

Prior to Omo’s death, Jacob had learnt his father could still be alive after his mother had previously told him the man had died before he was born.

Will Jacob regret closing the chapter on his father for good, or will he go about continuing the search for the estranged figure?

As Jacob reels from his mother’s death, Iain will be seen trying to save the life of Frankie, a young girl who goes missing and who he previously saved from a burning building in the medical drama’s special mental health episode earlier this year.

As Iain goes about trying to save her life once again, the circumstances will give the paramedic a new perspective on his own childhood.

Realising he needs to open about his turbulent past, Iain thanks his sister Gemma Dean (Rebecca Ryan) and colleague Ruby Sparks (Maddy Hill) for their support.

How will Iain’s exit unfold as he makes the big tuning point and will he manage to save Frankie?

Casualty continues Saturday at 8.25pm on BBC One.