Home » TV & Movies » Charity's wedding horror and all over for Kyle: Emmerdale 2023 preview 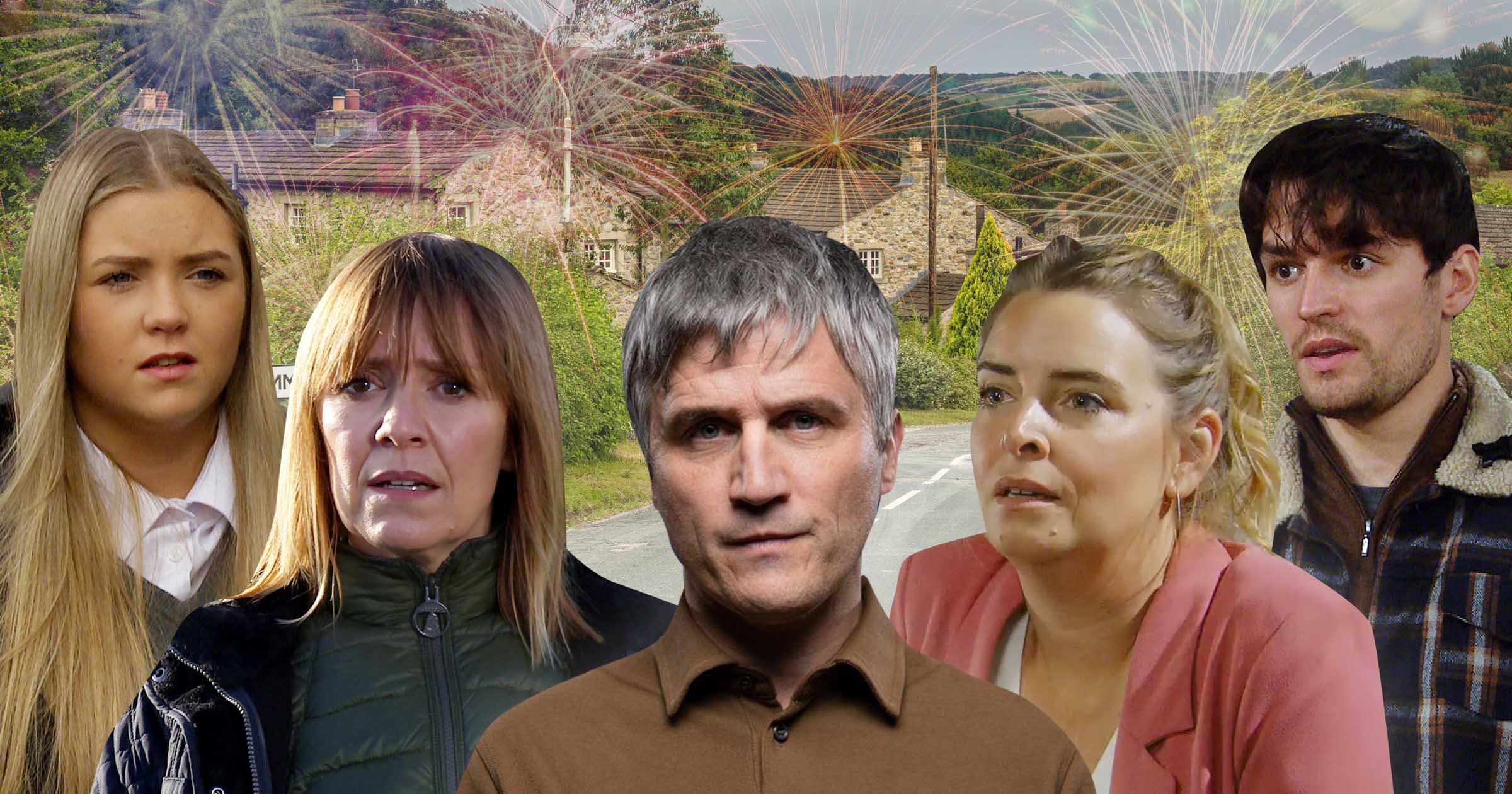 Chas (Lucy Pargeter) and Cain (Jeff Hordley) had their lives turned upside down (again) over the festive period in Emmerdale with the arrival of their brother Caleb (William Ash) into their lives.

As 2023 gets underway in the Dales, Caleb becomes determined to do something about Cain being in prison for a crime he didn’t commit, as the repercussions of Chas’s affair with Al (Michael Wildman) carry on into the new year – and Caleb’s influence starts being felt in the village.

But of course that’s not all that’s happening in the Dales and it’s promising to be a busy few months ahead for a number of the characters – not least Mackenzie (Lawrence Robb) who is struggling with the knowledge of Chloe (Jessie Elland)’s pregnancy, Leyla (Roxy Shahidi) who has some huge questions to answer, and a big storyline coming up for Cathy (Gabrielle Dowling) that’s already been hinted at over the festive period.

Here’s your essential rundown of the key storylines as we look to January and beyond in the most drama-filled community in the Yorkshire Dales.

With Cain’s story about how Al Chapman met his death now in doubt after Caleb suggested that the best way forward was for Kyle (Huey Quinn) to tell the truth, the police turn their attention to what actually happened, and who knew what and when.

Amy (Natalie Ann Jamieson), Moira (Natalie J. Robb), Matty (Ash Palmisciano) and Mackenzie are separately questioned by the police. They ask Moira about why she took Kyle away to Belfast and she steadfastly sticks to her story, while Mackenzie refuses to say anything about Kyle. #

Matty, meanwhile, is rattled when the police officer reminds him that perverting the course of justice is a serious crime. Will he stick to the agreed story?

Moira begins to question whether Caleb’s approach is the right one, but the situation takes a turn for the worse when the police bring Kyle in for questioning – and the boy insists it was him who killed Al.

Will Caleb’s strategy result in Kyle being punished for Al’s murder – while the rest of the family, including Cain, are charged with perverting the course of justice? It looks like the entire family might be heading for a bleak few months.

There’s a big day on the cards in the Dales – and big secrets will be spilled!

Sarah (Katie Hill) brings news to Charity (Emma Atkins) and Mack that Chloe has collapsed and has been taken to hospital.

Mackenzie is horrified to hear that she’s been living in hardship and he privately tells her he’ll do what he can to support her and the baby – leading Nate (Jurell Carter) to once again suggest that Mack might want to have more involvement with the baby than he’s admitting to himself.

This is set to be massively tested when Charity and Sarah decide that Chloe should come and live at Jacobs Fold. Chloe is massively uncomfortable with the idea, too, but Charity never takes no for an answer and before long Chloe has moved in.

Mackenzie is faced with trying to keep the secret that he’s the father of Chloe’s baby from Charity while Chloe is actually under his roof – and with his wedding to Charity also coming up, it’s like a bomb waiting to go off.

So he takes desperate action – which has huge and unforeseen consequences for him.

Show boss Jane Hudson teased to Metro.co.uk: ‘We have got Charity and Mackenzie wedding on the cards which will be happening next year.

‘I think we all know weddings don’t always go very smoothly and Chloe’s baby will be due around the time of the wedding so you can put the pieces together yourselves and figure out what might happen somewhere around the wedding date and the birth date. It will be explosive for Charity and Mackenzie.’

With relations between the former couple at an all time low, things will remain tense – but is there hope on the horizon as they try to do what’s best for Eve?

‘We’re continuing our story with Chas and Paddy and how you navigate trying to be the best parents you can when your marriage is falling to pieces and one of you has had an affair,’ Jane explained.

‘We’ll watch them both go on their journeys and it will be very serious and quite heartbreaking as we watch what happens to what were one of our favourite couples before we tore them apart, it’s fair to say.’

Gabby is keen to impress Kim, but makes a massive mistake that leads Kim to think that she’s not ready to run the business. Can Gabby prove her wrong?

And will anything romantic develop between Gabby and nanny Nicky (Lewis Cope)?

Jane explained: ‘There’s lots of fun in store for Nicyi and Gabby as we watch their fledgling romance and like any good story, there will be a few reveals along the way.’

Rhona starts a feud with Naomi

After a harmonious Christmas for Marlon (Mark Charnock) when he got his job back at the Woolpack and counted his blessings for the support of his loved ones around him as he recovered from his stroke, he finds himself in the middle of a feud when his wife Rhona (Zoe Henry) locks horns with his kitchen assistant and friend Naomi (Karene Peter).

Rhona continues to fume over Naomi’s influence on April (Amelia Flanagan) – which she sees as being a very negative thing. In coming episodes it seems she might have a point when April punches someone during an argument in the cafe. Not only that – she gets a piercing.

Rhona is sure that all of this is down to Naomi, as Nicola (Nicola Wheeler) continues to remind her of Naomi’s involvement in the girl gang who attacked her. But is it really fair to lay the blame for April’s behaviour at Naomi’s door?

The rivalry between Dawn (Olivia Bromley) and Gabby (Rosie Bentham) over the job at Home Farm led to Dawn having a realisation. She decided that she didn’t want to be working all the time while her children were being looked after by a nanny, and told Kim (Claire King) she didn’t want the job.

In upcoming episodes she’s delighted when Rhona welcomes her back to the vet’s and offers her the opportunity to train as a vet nurse.

Bernice (Samantha Giles) is excited about her new role at the B&B, but she’s devastated to hear that Pollard (Chris Chittell) is now planning to sell the business, meaning that there’s no longer a position for her as manager.

Having already burned her bridges with Mandy (Lisa Riley), she finds herself unemployed. But can she come up with a plan?

But that’s not all that’s going on with Bernice.

Jane said: ‘We’ve also got Bernice’s menopause story, again, we like to do stories that resonate with a lot of our viewers and not just females, it’s important that men know about menopause as well as women.

‘Sam Giles does it brilliantly as she’s managed to put humour into something that’s really quite hard and sad and difficult.

‘So we really get to enjoy that story while we try and understand what this woman is going through as she faces the menopause, which Bernice does not want to admit to at all, she’d rather have some terrific illness then be told she’s got menopause.’

We had glimpses before Christmas that all wasn’t well with Cathy Hope, when she appeared moody and unhappy during the carol concert. She complained to her brother Heath (Sebastian Dowling) that she had moments when she felt overwhelmed. ‘It’s like this thing comes down and I hate everything and I’m scared. And then it’s gone,’ is how she described it.

We know that this is the beginning of a storyline for Cathy that the show’s bosses have described as ‘challenging and emotional,’ with Jane saying, ‘I think it’s one a lot of parents will connect with. It’s one I haven’t seen a soap do before.’

A summer spectacular and other hints

Jane went on: ‘We are busy working on summer storylines as I always like to have a summer spectacular. So if I say that I have to come up with something now.

‘A lot of our youngsters have got stuff coming up too.

‘Noah and Amelia have got their story on, Amelia’s had her baby and Noah’s kind of being a surrogate father but Samson is going to be more devious then usual in terms of looking after himself.

‘It will cause big arguments with his father.’

Then we’ve got April’s story as she navigates her world with her dad as he’s recovering from his stroke.