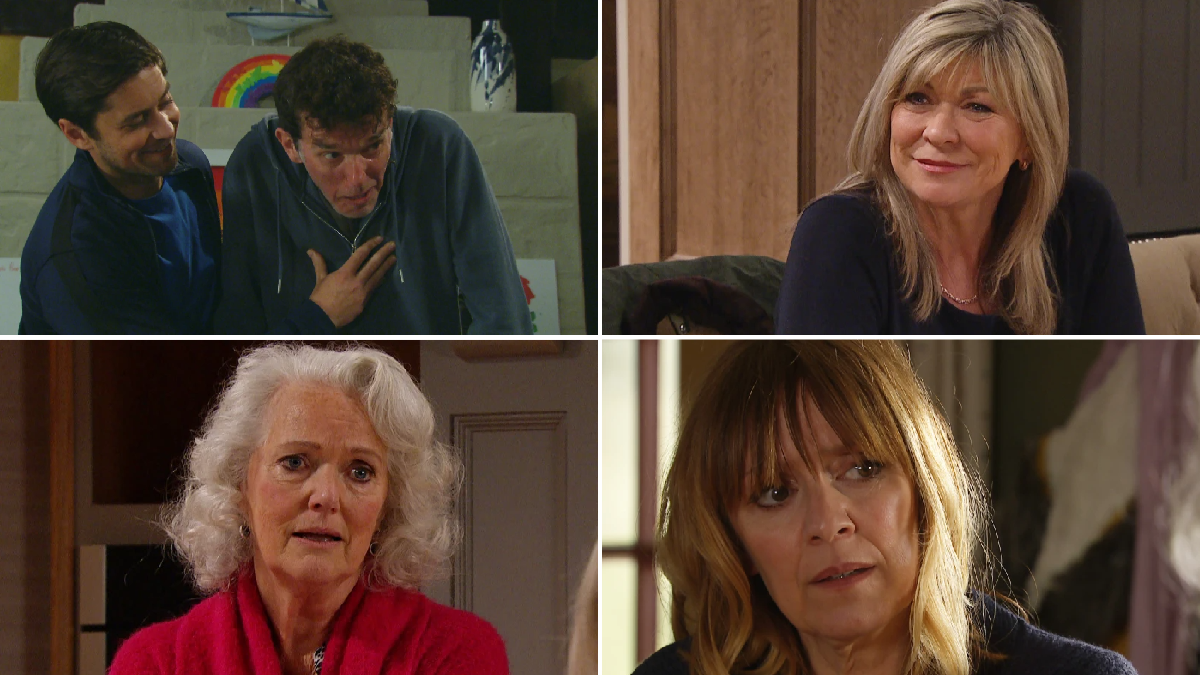 Families are thrown into chaos next week in Emmerdale as Faith Dingle (Sally Dexter) finally shares her tragic secret with Cain and Chas (Jeff Hordley and Lucy Pargeter) – but Cain isn’t ready to show any kind of support.

Meanwhile, Mary Goskirk (Louise Jameson) comes out as gay to daughter Rhona (Zoe Henry) – but Rhona handles it in a shocking way by publicly outing her mum.

Will and Kim are not on good terms after recent events – will the rift tear them apart?

Mary starts acting evasive when a question from Kim evokes some painful emotions. A weight is lifted when Mary comes out to a supportive Kim and relays the story of her lost love. Kim encourages Mary to come out to Rhona.

Cathy’s over the moon when Samson suggests going to River’s party together, only to immediately have her bubble burst when he says it’s just as friends.

Laurel surprises herself by admitting she’s ready for a new relationship.

Laurel, Nicola and Bernice head out to a bar as a way of getting the two warring sisters to make up after their council rivalry but Nicola heads off early. Nicola is soon accosted by a group of teenage girls on the way to her car and she’s mugged, beaten and left bloodied and unmoving.

Mary’s nervous about telling a busy Rhona the truth about her sexuality. A little later, Mary finally reveals to a stunned Rhona that she’s a lesbian. As Rhona finds out more about her mum’s revelation, she’s shocked to hear that the woman Mary fell in love with was Mary’s recently-deceased neighbour, Louise.

Her mum coming out leaves Rhona starting to question whether her whole family was based on lies. Mary is left hurt and worried by Rhona’s reaction.

Moira fears ructions when Cain returns from Scotland unexpectedly and discovers Faith in his home. Faith remains dignified when Cain mistakes her chemotherapy side-effects for a severe hangover. Hiding her heartbreak, Faith leaves the room, followed by Moira.

A beaten and bruised Nicola is in a hospital bed. Jimmy, Laurel, Bernice and Rodney anxiously wait for answers as to what might have happened. When a groggy Nicola wakes up, Jimmy questions her on the attack but Nicola lies saying she can’t remember who attacked her, embarrassed to have been attacked by teenage girls.

Later, disturbed Gabby reveals a video she’s found of Nicola’s attack by a group of young girls. Jimmy’s heart breaks for Nicola, when he realises she was too embarrassed to speak to him about it. Later, Nicola recounts the details of her attack to Harriet.

She worries her attackers will know her address since they have her driving licence. A tearful Nicola also worries about them coming to her home and attacking her children.

As she confesses how she thought she was going to die, Jimmy is dismayed to see his wife so broken….Can Nicola get over the trumatic attack?

Moira apologises to Faith for Cain’s hurtful words. A shaky Faith gratefully accepts Wendy’s care but knows she can’t avoid the truth coming out much longer.

Later, Faith asks Chas to make plans for her birthday, hopeful it might give her a chance to make her peace with Cain.

Mary is even more hurt when Rhona announces to the room that her mother is gay. Can the pair get past this?

While Chas and Bear plan Faith’s party at the Woolie, Faith struggles with the idea of dropping her bombshell on her birthday but is encouraged when Moira suggests she has a plan to ensure Cain shows up.

Apprehensive Faith worries how Cain will react to being tricked into attending her birthday party. Upon arriving, Cain is too angry to even speak. Cain scolds the others for tricking him into attending as Moira bites her tongue on the real reason he’s there.

Bitter Cain can’t get past his past grievances with Faith as the rest of her family support her. When Cain’s wish for Faith’s birthday is that she’ll drop dead, she reveals that her cancer is back and it’s incurable.

Marlon struggles but manages to take his first step with a walking frame .Later, Marlon awakes to a surprise proposal from Rhona but how will Marlon react?

Mary bonds with Bear as she shares details of her life and sexuality.

The fallout from Faith’s bombshell begins as Cain in particular handles it badly. Can he be persuaded to calm his temper and reach out?

Laurel feels emotional about her past with Ashley while Nicola struggles.