Production designer Ethan Tobman (“Room”) considers himself an “emotional architect” when it comes to world building. And, with “Free Guy,” in which Ryan Reynolds portrays Guy, an NPC (non-player character) in the video game, “Free City” (“Grand Theft Auto” on steroids), who unlocks his sentient AI super powers, Tobman was able to construct a unique virtual world around his character arc.

“I related to the concept and the satire of someone who feels he’s an afterthought,” Tobman said. “He’s a half-developed, background character who’s destined for something more but can’t figure out why he feels like a cog in a machine. That’s something a lot of us feel, and the idea of creating a world around that concept was such an enormous intellectual and creatively juicy challenge.”

The Fox fantasy adventure, directed by Shawn Levy (“Night at the Museum”) and produced by Reynolds (but greenlit by Disney after the Fox acquisition), underwent many rewrites, with Tobman pitching world-building ideas to scribe Zak Penn (“Ready Player One”). For the production designer, it was like delving into video game playtime. However, what’s unique about “Free Guy” as an original video game movie is that Free City is not all-CG. Both the real and virtual worlds (modeled after Boston, where the movie was shot) were done mostly in-camera, with practical sets, and augmented by VFX from Digital Domain.

“It was a very open, collaborative environment,” Tobman added. “As Shawn and Ryan developed the tone of their world, they were looking for ideas to inspire them.” Tobman immersed himself in MMO (massively multiplayer online game) logical thinking and level design by playing “Grand Theft Auto,” “Fortnight,” and “Ghost of Tsushim,” and he was inspired by such films as “Brazil,” “The Truman Show,” “Groundhog Day,” and “Being There.”

Tobman came away with an MMO video game world, defined by “economized creativity,” which was clean, vibrant, and exciting for players, yet unfinished in NPC sets, principally Guy’s apartment, where books have no words on the spines and his only utensil is a spoon for eating cereal in the morning. By contrast, the real world is messy and imperfect, such as the apartment for game developer Millie (Jodie Comer), which is a repurposed, patchwork of interior design, but seems comfortable and lived in.

“In the game, there’s great depth of field, sweeping camera moves, symmetry, and a limited palette of saturated pastels,” Tobman said. “And, in the real world, it’s five shades of gray and four shades of blue, there’s short depth of field, objects are out of focus, and the camera’s hand-held. We made a conscious choice to use the same materials in both both worlds.”

The highlight, though, for Tobman were the two Stash Houses (a base of operations where players show off their cars, weapons, and other treasures). Tobman thought of them architecturally as the Fortress of Solitude in “Superman,” yet constructed in the shape of stalagmite and stalactite rock formations. However, whereas the Badass Stash House was made out of black granite, the Stash House belonging to Millie’s avatar, Molotov, is all white. 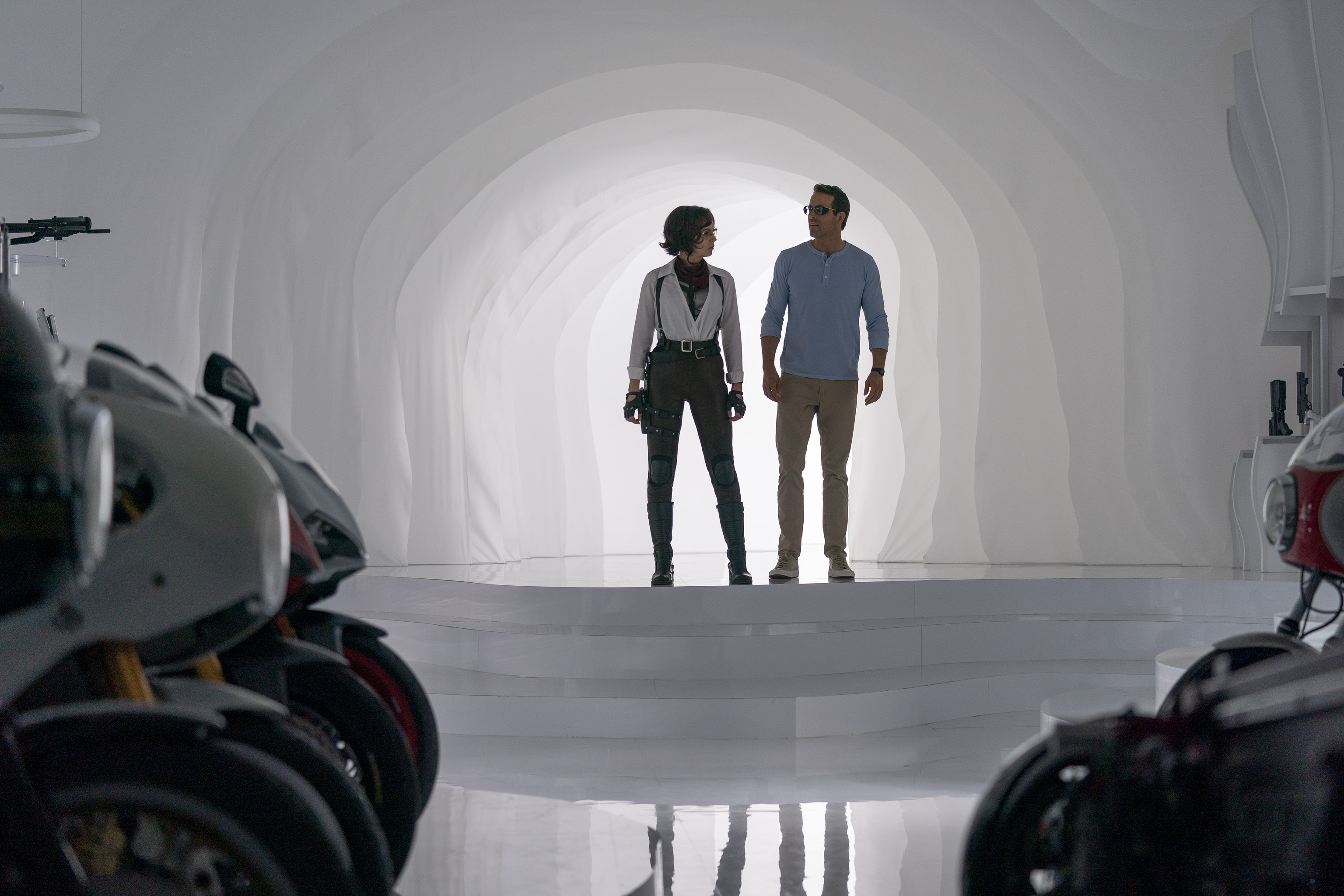 Photo by Alan Markfield for Fox/Disney

“Because she is a secret designer and she believes in an organic, self-growing city, I wanted it to feel like the belly of a whale made out of origami,” said Tobman. “So we laser cut 200 panels of fabric to look like stalagmites and stalactites. We then built it into a white defused box of fabrics, and then put lights on motors to go back and forth. The entire set was built out of transparent fabric. And it looks like it’s breeding because the lights are moving on a white, plexiglass floor.”

While Tobman was not in on Levy’s and Reynolds’ ambitious plan to use $44 billion of Disney IP in 16 seconds during the third-act CG battle between Guy and Dude (his doppelganger on steroids), the production designer had his hands full figuring out the mysterious island. “I was inspired to do research and incorporate elements of the rice paddies of Vietnam, the terraces of Machu Picchu, and the Zhangjiajie National Forest Park in China,” he said. “I wanted to explore the idea of an island made out of a perfectly square waterfall. It’s impossible in real life, but it makes sense when you’re landscaping for missing data.”