It’s been over a year since audiences met the Morales clan and their Boyle Heights, Los Angeles taco shop, Mama Fina’s. At the end of Season 1, the group knew that Mama Fina’s was on death’s door, set to be bought out by a gentrifying white woman interested in turning it into a pop-up shop. On top of that, family patriarch Casimiro, aka Pop (Joaquín Cosio), had been picked up on a routine traffic violation and was being detained by ICE. With so much tension built up, creators Marvin Lemus and Linda Yvette Chávez could have made this a heavily dramatized season. And it is, no doubt, but “Gentefied” always retains the sense of heart and community that made Season 1 so special.

Last season was about not only introducing us to the characters, but bringing them together. Cousins Erik (Joseph Julian Soria), Ana (Karrie Martin), and Chris (Carlos Santos) were all in various ruts in their lives, unifying around Pop in spite of their own personal drama. This season, it’s immediately apparent that the trio are drifting apart to find their own individual destinies.

Taking place just three months after Pop’s arrest, all three are already laying the groundwork to the issues that will carry them throughout the season. Chris, still hoping to become a chef, is set to go to Paris. Ana, still smarting over her breakup with Yessika (Julissa Calderon), is continuing to grow as an artist, making strides to be taken seriously by those who would want to capitalize on her talent. And Erik, now a new father, has settled into domestic bliss with girlfriend Lidia (Annie Gonzalez) and their daughter.

There’s a slight tweak to this season’s structure. Where Season 1 had standalone episodes devoted to various side characters — the episode focusing on Ana’s mom comes to mind — this season goes the standard route of integrating everything. Pop becomes more of the fulcrum around which Erik, Ana, and Chris all revolve. The only new addition to the cast of significance is Chris’ father, Ernesto (Manuel Uriza), who was little more than a voice on the other end of the phone in Season 1. Uriza’s performance is great as, up till now, we’ve perceived Ernesto as an enemy, a man who got out of town as quick as he could and who perceives Chris’ work at Mama Fina’s as beneath him.

Much of Chris’ storyline this season involves the push-and-pull of his father’s desire to see Chris leave Boyle Heights and pursue his dream, and Chris’ desire to stay connected to his Mexican roots. Santos’ performance this go-round feels more muted than last year — there’s no showy restaurant showdown for him. Instead, we see him embark on a new relationship that, much like Ana, sees him possibly working for the gentrifying forces at work in Boyle Heights. The generational relationship between Casimiro and Ernesto, and Ernesto and Chris, leads to a beautiful and heartfelt conclusion for the trio that sees Chris’ dueling desires coalesce. 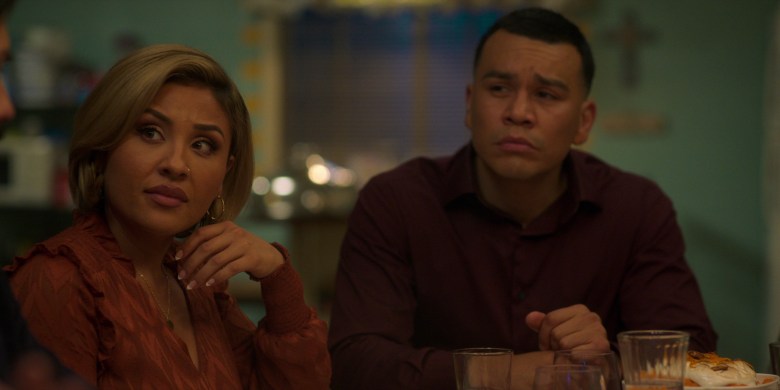 Erik and Lidia’s move to Stanford for the latter’s new job produces the strongest storyline of the season. Much like Ana’s Season 1 struggle to balance activism with her own personal desires for success, Lidia and Erik can’t seem to make their individual desires work with their professional goals. Lidia takes on an assistant whose flaky attitude couldn’t come at a worse time. It’s one of the best episodes of the season, especially from Soria, who portrays a different type of father in Erik. Erik truly loves being a stay-at-home dad, but he constantly feels as if he’s on a tightrope, with one screw-up being enough for Lidia to lose faith in him and for him to leave. A late in the season revelation from Erik’s past feels like an afterthought, but hopefully it’ll be given more significance next season.

That leaves Ana who, unlike in Season 1, feels more like a side character. It might be because, where Erik and Chris have clearly defined dreams and are making bigger strides toward independence, Ana’s is more gradual. There isn’t a push to craft her own space, and outside of embarking on a new relationship, her art and activism come off as less of a factor until the final moments of the season. Her narrative is more in service to Pop, with Cosio continuing to give audiences more reasons to love him as a character. This season Pop is working on telling his story to the masses in order to get community support for his visa. The problem is Pop is a bit of a curmudgeon and half the fun comes from watching him try to get a crash course in PR.

This season may not feel as strong overall, but there are individual episodes that are so fantastic they continue to show why the writing on “Gentefied” is ultimately brilliant. The aforementioned episode with Lidia and Erik is one, but the Thanksgiving episode is also a wonderful piece of television. The entire family comes together leading to reveals about how each person feels about their lives and one airborne turkey. “Gentefied” continues to pack a heavy amount of power within Season 2, even if it feels more streamlined than the season prior. The cast hasn’t lost an ounce of humor, fun, or commentary.