“The first thing they said was, ‘Don’t worry, it only affects elderly people — people 55 and older.’ I’m like, ‘What??? I’m the elderly??’” the actor-director says 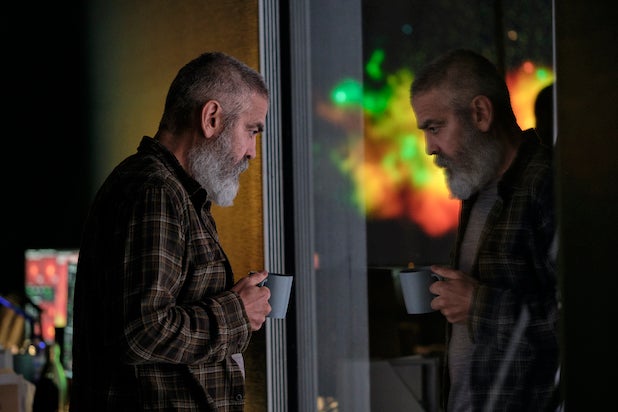 Even George Clooney is surprised by how timely his new movie, “The Midnight Sky,” has become since the onset of the coronavirus pandemic. The film, based on the novel by Lily Brooks-Dalton, is set 30 years in the future after an unspecified calamity has threatened to make Earth unlivable and a team of astronauts is returning from a scouting mission at a potentially inhabitable moon of Jupiter.

“Well, there wasn’t a pandemic when we started, right? That’s sort of changing the temperature of what the movie is about,” said Clooney, who both directs and stars in the film as a terminally ill scientist  who’s remained behind at an Arctic base that he thinks is deserted until he encounters a young girl, Iris (Caoilinn Springall).

“There’s so much hatred and anger right now in the world,” he said. “When I was pitching Netflix on the way I wanted to tell the story, I said, ‘It’s not inconceivable that 30 years from now, playing this kind of hatred forward, we blow the whole thing up.’ I consider this a hopeful film, but it was important to say that the toxic anger and hatred could pour into the world and we could really do something stupid. And then the pandemic happened, and the movie also becomes about communication and being able to touch and talk to and see one another.”

The film wrapped production in mid-February before the pandemic shut down film shoots (and movie theaters) worldwide. “We’d been hearing about COVID, obviously, and people were getting a little nervous,” Clooney said of his first days in the editing bay. “And then all of a sudden we turn on the TV, I think it was when the NBA players walked off the court. The first thing they said was, ‘Don’t worry, it only affects elderly people — people 55 and older.’ I’m like, ‘What??? I’m the elderly??’ And then within a day, I think, they were like, ‘Don’t come back to work.’”

For Clooney, the biggest challenge of doing postproduction remotely was in the musical score. Since composer Alexandre Desplat couldn’t go to England to record at the Abbey Road studio as planned, he wound up recording “10 musicians at a time instead of a 150-piece orchestra,” Clooney said. “He was conducting from Paris, doing sections of music, 10 people at a time. And I’m up at five in the morning in my screening room with Zoom on one side and a live view of the score on the other.”

And while the film won’t have the usual big-screen premiere, Clooney and producer Grant Heslov did manage to rent out the Village theater in Westwood to experience it a real cinema for themselves. “This guy opened up for us, and there were cobwebs all over, and posters for the John Krasinski movie (“A Quiet Place Part II”) everywhere, because they’d done the premiere there,” he said. “It was just Grant and I sitting there watching the movie on this giant screen. It was fantastic, but sort of like a ‘Twilight Zone’ episode.”

He admits he’s disappointed most audiences won’t be able to have that experience when the film debuts on Netflix Dec. 23. “We shot it on 65 (mm), and it was really designed to be shown on IMAX,” he said. “It’s frustrating, because I don’t really see that happening in the normal world. There’ll be some drive-in theaters, maybe, but in general I don’t see much of a chance of us being on a big screen. It’s not safe now.”