Alastair Campbell appeared alongside ITV presenter Susanna Reid on Monday to co-host Good Morning Britain. The broadcaster stepped in to replace Adil Ray, who until now, had been a familiar face on GMB following Piers Morgan’s exit earlier this year. During the programme, Alastair and Susanna grilled Health Minister Nadine Dorries about boosting children’s mental health. They also spoke with The Wanted singer Max George about his struggle with depression. However, throughout the show, some viewers appeared to be distracted by Alastair who kept twiddling his pen at the desk.

Viewers quickly took to social media to share their thoughts about the GMB host’s “annoying” habit.

Another wrote: “Noooo twiddling of a pen please Alastair.”

A third pleaded: “Stop fiddling with your pen!! Stop it now!” 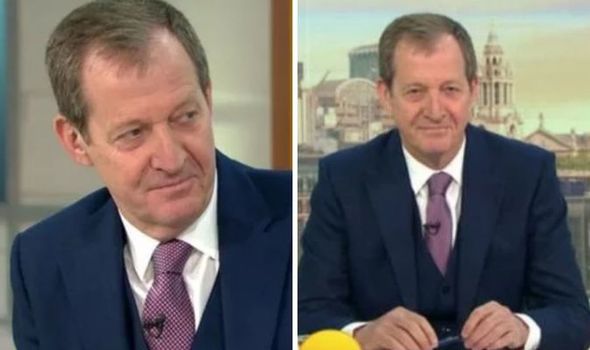 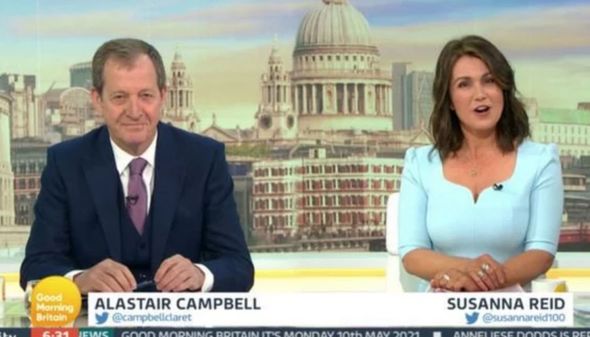 “Alistair Campbell. Stop twiddling with your pen. It’s so annoying,” a fourth penned. While another viewer wrote in response: “…..and waving his arms around!” (sic)

A fifth said: “Can somebody take that spinning pen off @Campbellclaret he’s sending my head west now.”

Another quizzed: “How annoying is Alastair Campbell fiddling with his bloody pen…He sounds nervous and looks lost…”

“Please ask @Campbellclaret to stop waving his pen around on @GMB,” a seventh viewer asked. 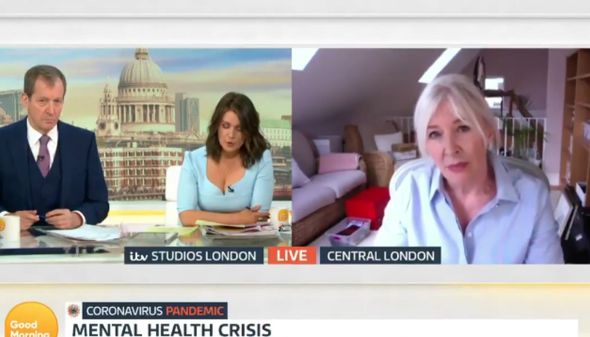 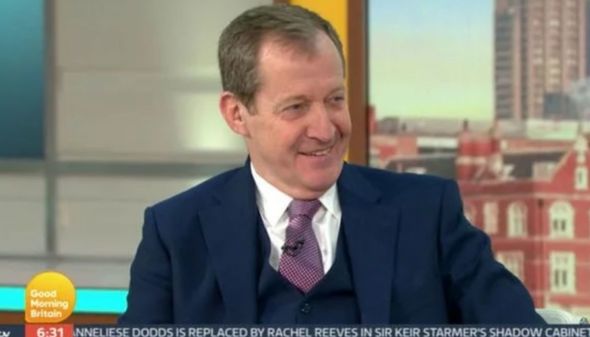 When the show came to an end, Alastair took to social media to respond to the mixed feedback he received from viewers for presenting the programme.

The former press secretary for Tony Blair admitted that he had avoided social media whilst on-air, following the advice of fellow GMB presenter Adil.

The 63-year-old said that his first appearance had flown by, although, he went on to admit that he had been greeted by the “usual mix of love and hate” on the social networking platform.

“Many thanks for all the messages Re @gmb – I took @adilray advice and didn’t look at social media once while on air,” Alastair tweeted.

“Looking now at the usual mix of love and hate but with a few of the haters converted I would say!

“It flew by!” he added before sharing a bit of behind-the-scenes information.

“A lot more going on than you realise when a guest.”

“Felt I was in the hands of real pros though, which always helps,” he continued.

“Enjoyed seeing @MaxGeorge a decade after our scrap and he will be a big boost to the mental health advocacy cause.

“And it meant pictures of Turf Moor to go with my Sean Dyche cast-off tie ahead of Fulham tonight.”

The writer went on to address the fact he could have grilled the Health Minister more as he added: “Could maybe have gone a bit harder on @NadineDorries in #MentalHealthAwarenessWeek as I really do worry about the state of our mental health services but I had @schooltruth [Fiona] in my head saying ‘stay calm and don’t rant!’

“And to be fair Nadine did come on when plenty wouldn’t.

“Now the rain is falling and I am off to the lido No 2 #happyplace after the one I share with @jordannorth1 #utc,” he shared.