Kate Garraway, 53, welcomed former Data Chief and Strategist for President Donald Trump’s presidential campaign Matt Braynard and Biden supporter Eric Guster to Good Morning Britain today. The pair had opposing views on the leader of the free world testing positive for coronavirus after the White House revealed both the 74-year-old and his wife Melania Trump, 50, had contracted the illness after the President’s adviser Hope Hicks also caught the virus. As tensions rose, Guster brought up the fact the President had claimed COVID-19 was a “hoax” back in March, to which his fellow guest fiercely defended the politician. With many interruptions, the ITV host interjected to break up the row. 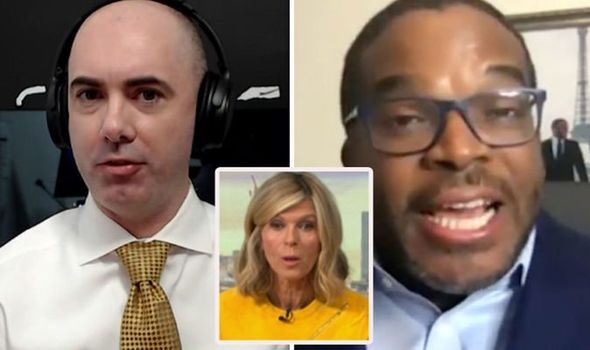 Throughout the debate, Guster asked Braynard not to “interrupt” him as he made the point the President actively chose not to wear a mask, attending packed rallies where others weren’t also wearing a face covering.

However, the Data Chief claimed the likes of presidential candidate Joe Biden, 77, was being “overly cautious” by wearing a mask.

As the Strategist continued to defend the president, Guster asked his fellow guest “what planet he was on” after reminding the presenters Trump was on record claiming the pandemic was a “hoax”.

With the men not willing to reach a compromise, Garraway ended the debate as she said their comments “illustrated” how decisive the matter has become.