The hallmarks of a Christmas movie are by now painfully familiar: Ornate decorations, gift shopping in a generic department store, the pristine but tasteful mini-mansion, the outsider partner eager to impress the family, a large ensemble cast outlined with half-drawn quirks — mostly, if not entirely, white. Entering boldly into this bunch is “Happiest Season,” a shiny holiday comedy which is by all accounts indistinguishable from the rest save for one little detail: It’s gay!

Unfortunately, this tiny tweak isn’t enough to make a lasting impression on the genre, especially with a lackluster script that offers little in the way of surprise or delight. What’s more, including a sub-plot about a rich white man running for mayor of a Pennsylvania enclave with no mention of actual politics feels — to put it mildly — painfully out of touch.

Not just because 2020 saw Black Lives Matter protests erupt around the country, challenging white people to seriously examine our privilege, but it’s oddly disconcerting that a proudly LGBTQ movie could be so emphatically apolitical. Rather than being a queer film, which connotes a political or at least somewhat subversive perspective, “Happiest Season” is a definitively lesbian movie. It’s not trifling in complicated topics like identity or civil rights — beyond the rights of a rich white girl to come out to her conservative family.

Admirers will say this is what progress looks like: that we deserve a big-budget holiday rom-com with a happy ending just like straight people have had for decades — ever since George Bailey lassoed the moon for Mary. They’re not wrong, we do deserve our own “It’s a Wonderful Life.” Unfortunately, “Happiest Season” ain’t it.

This movie’s deference to mainstream culture is inherent in its innocuous title, which is either a subtle riff or a missed opportunity to play on the original meaning of “gay.” The movie opens on Abby (Kristen Stewart) and Harper (Mackenzie Davis) perusing Christmas lights in a suburban neighborhood, where they sneak onto a roof for a little festive canoodling. The movie’s first attempt at slapstick occurs when Abby slips and falls, hanging from a drainpipe as a woman loudly accuses her of peeping. As the giggling couple flees the scene, the woman barks orders at her male partner, donning reindeer antlers and leather collar, calling out “pervert!” in a blink-and-you’ll-miss-it nod to alternative sexuality. 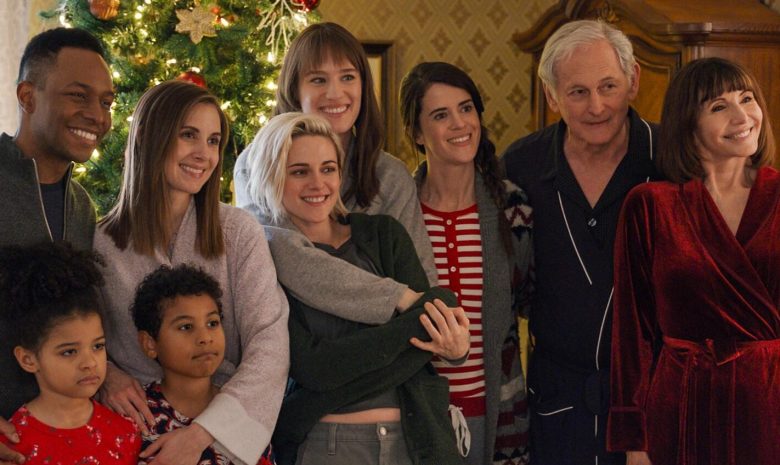 All of this excitement is just too much for Harper, who drunkenly invites Abby home for Christmas to meet her family. Regretting the move in the cold light of day, she waits until the car ride to reveal that she isn’t actually out to her family. They think Abby is her roommate, straight, and an orphan. (Only one of these things are true, though the orphan backstory is not fleshed out.) Upon arrival at the small mansion, we meet Harper’s Stepford family, consisting of perfectionist mom Tipper (Mary Steenburgen), mayoral hopeful dad Ted (Victor Garber), overly competitive sister Sloane (Alison Brie), and kooky odd duck sister Jane (co-screenwriter Mary Holland).

Only later do we meet Sloane’s Black husband Eric (Burl Mosely), who has maybe five lines of dialogue and is one of five non-white people who speak in the film. He gets less screen time than their dour biracial twins (Asiyih and Anis N’Dobe), who are introduced as menacing spies and whose main narrative purpose involves a wildly tone-deaf shoplifting gag.

Stewart, as ardently loved by film bros as she is by lesbian fanatics, is a great dramatic actress whose passion for indie film has inarguably enriched cinema. That doesn’t necessarily translate to comedy. She’s no Ben Stiller, and this is no “Meet the Parents.” Steenburgen is mostly relegated to futzing with her iPad, but does her thing with the occasional sharp line like: “I once took too many Ambien and bought a racehorse online.”

All of these orbiting characters can’t dress up the wooden chemistry between Stewart and Davis, which stands in stark contrast to the actual chemistry between Stewart and Aubrey Plaza, who plays Harper’s former high school fling. Even the doyenne of deadpan Plaza can’t milk the funny from weird half-jokes about finger ailments or a surprisingly stale gay bar scene starring “Drag Race” favorites Jinkx Monsoon and BenDeLaCreme. Their innocent flirtation doesn’t cross any lines, though you may find yourself wishing it had. Harper is so careless towards Abby throughout the movie, it’s hard to root for their happy ending. 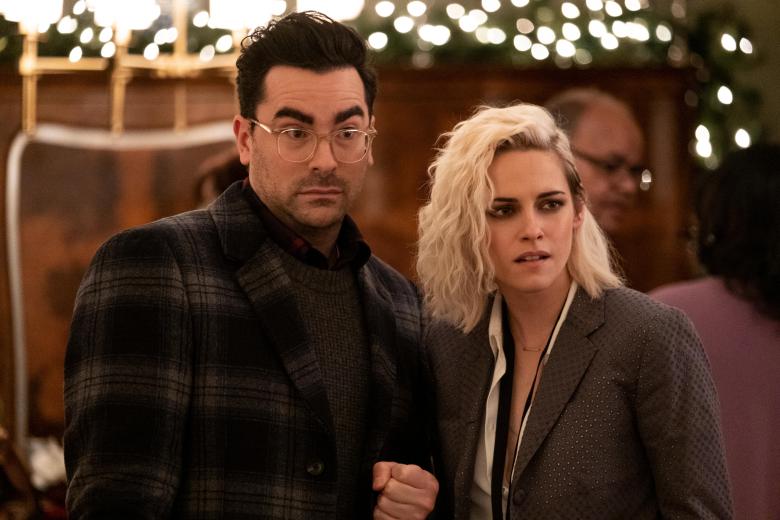 Dan Levy provides a few bright spots, blending light feminist commentary with other forms of much-needed levity, though he’s basically plays a watered down version of his beloved “Schitt’s Creek” character. “Have you managed to get a man’s permission to take ownership over a grown human woman yet?” he quips during one of many expository phone conversations that reveal Abby’s emotional state. His brief interaction with Tipper is also a highlight; after flailing to play straight for her, he can’t help but remark how fabulous she is.

“Happiest Season” was directed and co-written by Clea DuVall, a queer icon since her breakout performance in 1999’s “But I’m a Cheerleader.” Her 2016 directorial debut “The Intervention” crackled with all of the witticisms and rich character studies sorely lacking from “Happiest Season,” which feels carefully calibrated to appeal to the widest possible audience. Whether it’s a sophomore slump or a compromise she felt necessary to sell a lesbian rom-com in Hollywood, here’s hoping this isn’t her last attempt.

“Happiest Season” will start streaming on Hulu on Wednesday, November 25.