Home » TV & Movies » ITV GMB: ‘When I win, you won’t ask me that’ Jeremy Hunt shuts down Ben Shephard

Both presenters were keen to find out how Hunt felt about the contest and if he was confident he could beat Boris Johnson to become the next Prime Minister.

And, it seems Hunt is very confident as he told Shephard he would return to chat about his win on the show next week.

Speaking about the leadership race, Shephard asked: “Is there anything you would have done differently?”

“I don’t think so,” Hunt replied. “I haven’t obviously done something like this before.

“People want to see who you are and your personality.”

Shepard pressed: “Do you think you should have take more risks?

“Everyone knows who Boris is. If you’d been more risk taking or edgy would that have cut through a bit more?”

“When I win this competition next week, I don’t think you’ll be asking me that question,” Hunt replied shutting down Shephard’s doubts.

“I didn’t take silly advice… I’m someone who has a lot of ideas for the future. 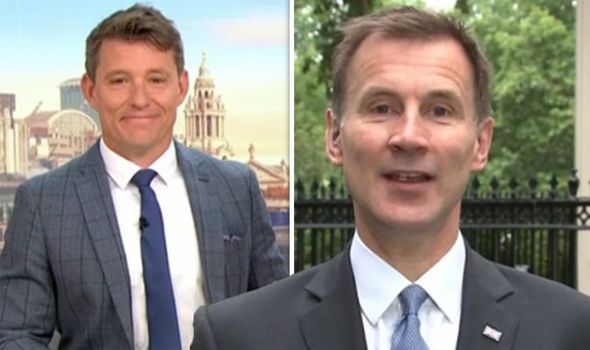 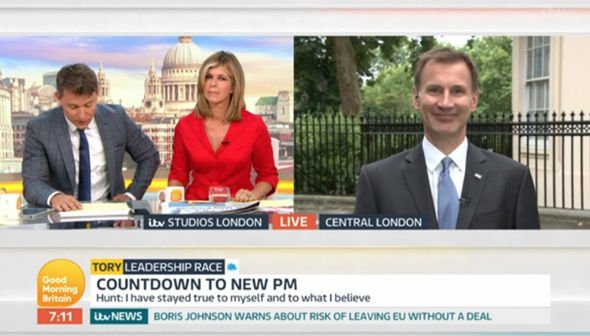 “This has been my chance on how I want to fire up the economy and help young people. I have really enjoyed myself.”

Shephard laughed: “If you are Prime Minister next week, I will be thrilled to say those things, you’d turn over the odds in expectation.”

Garraway then chipped in to ask: “How confident are you really? Would you bet your house on this?”

“Well, what I said was I was going to turn a coronation into a contest and now a contest into an upset,” Hunt smiled.

“Conservative part members are thoughtful people, they do not want to lose their Brexit.” 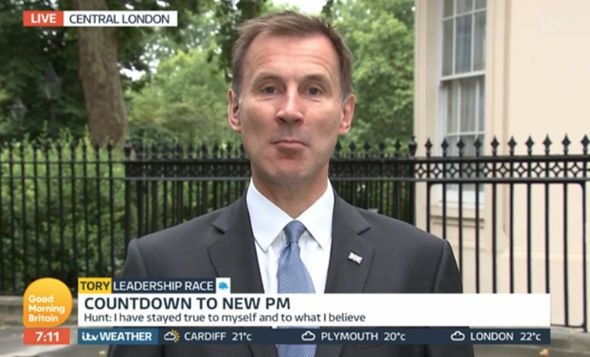 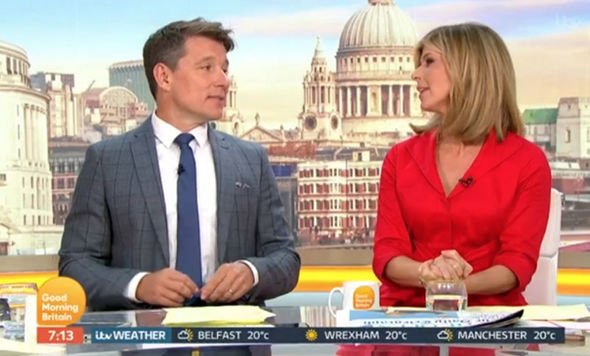 He added: “It’s been very much coming to me, we have had a huge amount of switching to my side.

“No one really knows. We are quietly confident.”

Shepard went on to ask how his family have felt about the leadership race, probing: “What have they made of this?”

“My son came to one of the hustings, he’s nine,” Hunt commented. “At my daughter Elly’s birthday party, in the middle of everything, she snuck up and said, ‘Daddy, are you famous?’

“I’m pleased they’re too young to know what is going on.”

ITV Good Morning Britain airs weekdays on ITV at 6am.