A very serious interview with the man who portrays Alan Shepard, the first American in space, on Disney+ 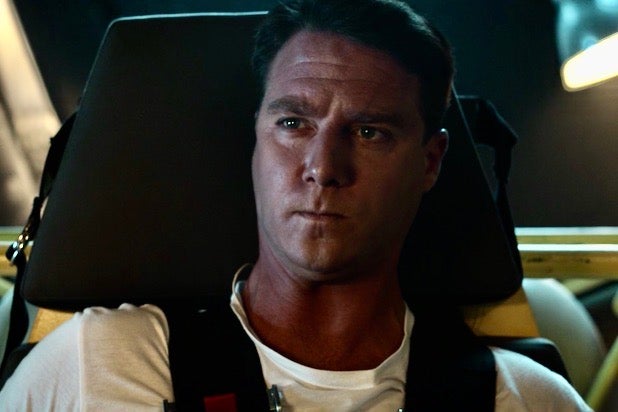 You may remember Jake McDorman’s abs from a post-shower scene in CBS series “Limitless,” but just how strong is the dude’s stomach?

TheWrap asked McDorman, who portrays Alan Shepard on Disney+ series “The Right Stuff,” the only question that should really matter to fans after watching Friday’s third episode: Did you puke?

Jake gave us the long answer, and we were happy to jot it down for readers.

McDorman and the other actors portraying the Mercury 7 astronauts had a pretty lengthy “wish list” out of the show’s training, he said, but they “weren’t allowed to do most of it.”

“We didn’t get to go up in the Vomit Comet, we didn’t get our eyeballs pushed back into our skulls in an F-16, even though we wanted to and there was a time in pre-production where it looked like we were about to,” McDorman said. “Just scheduling and probably insurance made that not possible.”

OK Jake, but did you puke?

McDorman did not heed that advice.

“I was like…I’ve ridden on roller coasters, I don’t get motion sickness generally,” he recalled. “I thought I’d do better than I did.”

“I didn’t end up vomiting, but it wasn’t not close to happening,” he said.

“Making [a TV show] takes a long time, so you don’t do it once or twice, you do it 25 times from all different angles,” McDorman explained. “So I was lucky that because [Shepard]…struggled with this inner ear problem with Meniere’s disease, the way we incorporated that into the story was around the time of his MASTIF training. That flares up really bad, resulting in his failure to do the MASTIF. So that didn’t require much acting on my part, I kind of just got to sit in it and f—ing suck at it, which was the point.”

Spoiler (for history) alert: McDorman’s Shepard is the first American in space. It wasn’t, however, the first Mercury 7 astronaut McDorman read for in his “Right Stuff” auditions. The “American Sniper” alum initially auditioned for the role of Gordo, he told TheWrap.

The first two episodes of “The Right Stuff” debuted last Friday on Disney+. The subsequent six episodes are rolling out weekly, one at a time.

A Bellator MMA fighter knocked out his opponent with a jumping knee, then mercilessly attacked him with ground-and-pound

A Bellator MMA fighter knocked out his opponent with a jumping knee, then mercilessly attacked him with ground-and-pound