Air Bud remains in the hearts of many moviegoers to this day. However, it has a truly ridiculous premise that extends far beyond a dog that plays basketball. Television talk show host John Oliver deconstructed Disney‘s Air Bud. He explained why he calls it “one of the most flagrant examples of America’s fetish for carceral solutions ever.”

Charles Martin Smith directed 1997’s Air Bud, which is a family film that touched many audiences around the world. It spawned numerous sequels that became increasingly detached from the initial formula. The host of Last Week Tonight with John Oliver created an online exclusive to deconstruct Air Bud.

“The quickest possible explanation of what happens in Air Bud is it is the story of a dog playing basketball on a team full of children, who then win state,” Oliver said.

However, Oliver expressed a deeper look at the meaning behind Air Bud.

“The slightly longer version is that the kid named Josh’s father dies and he tries to fill that void with a dog,” Oliver said. “The movie generally glides past this point, but the fundamental issue here is that the kid who doesn’t have a father tries to replace him with a golden retriever who happens to be good at basketball.”

Oliver continued: “Not that good though, to be honest. He can’t dribble or rebound or box out. He’s not really a playmaker and has little to no basketball IQ. Really, he’s just quite good at shooting.” 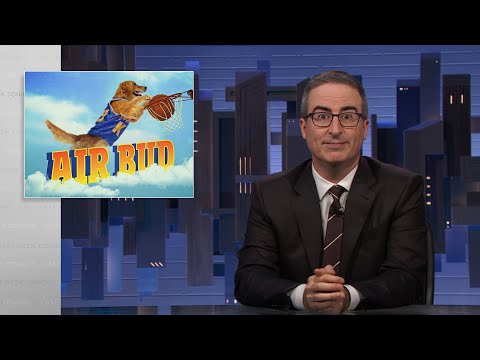 Oliver continued to dissect Air Bud and its nonsensical story. He explained that the lead character named Josh (Kevin Zegers) actually stole the dog. A birthday party clown named Norm Snively (Michael Jeter) is the legal owner. However, the film wants the audience to want the dog, Buddy, to stay with Josh, even though his family members aren’t the legal owners.

“Snively attempts to regain ownership of Buddy, even contacting a judge,” Oliver pointed out. “A judge, in his wisdom, decides two things: One, he will ultimately only make a ruling outside on the lawn, which sure, I’m not going into that. But, two, on the subject of lawful dog ownership, he is convinced to let the dog decide.”

Oliver continued: “So, paperwork be damned. Buddy, the dog will decide who he wants to live with, and whoever he chooses will henceforth be his legal permanent owner. Now, predictably, Buddy chooses the boy, who has given him nothing but affection and freedom.”

However, Oliver explained how nobody would expect the ending of Air Bud because of Snively’s instant arrest. This inspired a rant on the host’s specific issue with the movie.

“I’m not mad that Josh got Buddy based on a court ruling that took place outdoors with a judge in an office chair,” Oliver stated. “I’m not even mad that Buddy’s real legal owner, not only lost his dog but remember, got physically carted off by police in one of the most flagrant examples of America’s fetish for carceral solutions ever committed to film.”

Oliver concluded: “I just want to understand the rules. The rules that are supposed. to be so foundational important to the Air Bud story.”

The host explains the danger of no rules

Oliver pointed out that Air Bud itself points out that the dog can play basketball because there are no official rules against it. However, when it comes to official legal proceedings, the rules don’t apply. This deeply bothers the talk show host as he walks his viewers through the 1997 movie.

However, Oliver concluded the online exclusive with the note that nothing he said about Air Bud ultimately adds up to much. It’s simply a rant and there are no rules against it, so he decided to take this opportunity to target this ridiculous, yet hilarious rambling.