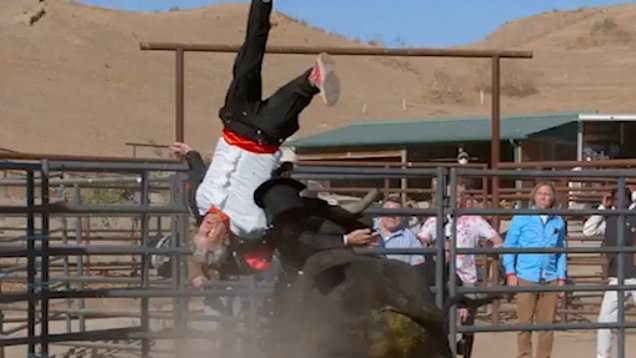 Johnny Knoxville and his merry band of men have turned the danger up to 11 with the trailer for Jackass Forever showing they’re just as bafflingly absurd and ridiculous as ever.

The latest film in the franchise has been a long time coming, with Johnny, Steve-O, Wee Man, Chris Pontius, Dave England, Ehren McGhehey and Preston Lacy reuniting and joined by some new faces.

It’s been 10 years since we last saw these guys put their bodies on the line all in the name of our entertainment – and their own, we’re sure – and from seeing Johnny shot out of a canon wearing only a pair of feathered-wings, to being gored by a bull, it’s clear they’ve pulled no punches.

You’d think after all this time they’d have run out of gnarly stunts to pull, but no sir.

The trailer shows Machine Gun Kelly make an appearance as he’s slapped into a pool by The Big Hand, with another star being downed by a baseball thrown directly at his crotch by a professional player. Following one apparently dangerous stunt, Johnny is also seen speaking with Steve-O, who is wearing a neck brace and has been placed on a stretcher (before pulling out his fake teeth…).

At one stage, Danger Ahren is also being covered in honey by the lead Jackass, with a fillet of salmon placed in his lap, as he’s strapped to a chair and left to deal with an actual, real-life bear as his comrades look on from the safety of another room. As you do.

‘Concussions aren’t great,’ Steve-O says in another moment from the trailer, ‘but as long as you have them before you’re 50, it’s cool. And Knoxville’s 49, so we’re good.’

The official synopsis reads: ‘Celebrating the joy of being back together with your best friends and a perfectly executed shot to the dingdong, the original jackass crew return for another round of hilarious, wildly absurd, and often dangerous displays of comedy with a little help from some exciting new cast.’

Sadly, it seems this is Johnny’s last spin around the Jackass track, as he shared his fears his luck may be running out when hit comes to his hair-raising stunts.

He told GQ earlier this year: ‘You can only take so many chances before something irreversible happens.

‘I feel like I’ve been extremely lucky to take the chances I’ve taken and still be walking around.’

Jackass Forever is in cinemas October 22.