Home » TV & Movies » Legacies Series Finale: Get the Story Behind Those Long-Awaited Cameos — 'I Didn't Think They Could Pull It Off'

Well, look who finally decided to show up!

Thursday’s series finale of Legacies welcomed two of the most beloved characters (according to our ranking, anyway!) in the Vampire Diaries Universe: Klaus Mikaelson and Caroline Forbes, albeit under very different circumstances.

Let’s start with Klaus, who delivered a tearful message to Hope from Peace through the magic of a projector screen. As you probably guessed, Joseph Morgan filmed Klaus’ monologue separately from Hope’s reaction to it, so we regret to confirm that Morgan and TV daughter Danielle Rose Russell never actually crossed paths. Heck, she’s impressed that the emotional moment came together at all.

“I wasn’t convinced that [Klaus’ speech] was going to make it into the episode,” Russell tells TVLine with a laugh. “I didn’t think they could pull it off. I was acting to a blank screen, which was fun for me. I did have the little clips of Hope’s life playing on repeat, which production set up, but I was mostly acting to a blank projection screen.”

Fortunately, Morgan’s scheduling worked out such that he was able to step back into Klaus’ shoes, if only for a brief cameo. Russell says she “bawled” at the scene when she finally got to watch a completed version. 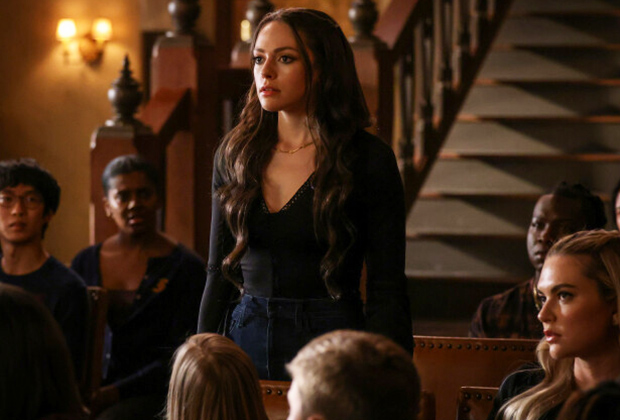 “Hope had been carrying such tremendous survivor’s guilt,” series creator Julie Plec says. “It has informed everything about her — her inability to love too fully or act too freely. There’s this adult responsibility that was put on her shoulders attached to the death of her family, more specifically the loss of her father. The Necromancer told her that Klaus would never find peace until she did, so if we had to end the show without being able to give her that closure, I would have been devastated.”

And it didn’t take much convincing to get Morgan, who’s currently filming the fourth season of HBO Max’s Titans, to reprise the role.

“Joseph as an actor is committed to the craft of building a character, so when he sees something is the right move for that character, he wants to come do it,” Plec says. “And that’s all it took. We told him that what Hope needs to gain closure for her character is directly tied into his character’s closure. He was very gracious and very willing to do it, and he was very happy with the speech we wrote for him. When I saw the cut for the first time, I burst into tears.” 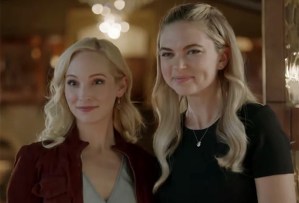 Getting Candice King back into the hallowed halls of the Salvatore School, however, took a little more elbow grease. Plec credits the appearance to “four years of patient friendship.” More specifically, “as a showrunner, I always wanted Caroline in Legacies,” she says. “As a friend, I wanted Candice to come when she was ready. [Showrunner Brett Matthews] called her and said, ‘We don’t know for sure, but this could be the end, and here’s this thing we want to do with you.’ And she said, ‘Sign me up.’ It was that easy.”

Caroline’s role in the finale was considerably larger than Klaus’, with the character becoming the school’s new interim headmistress following Alaric’s departure. And it’s entirely possible that she would have gotten relatively comfortable in her new position.

The possibility of King returning in a recurring capacity “was meant to be a conversation that Candice and we could have if there was going to be another season,” Plec says. “I think she was open to the conversation, but we never actually got that far.”

What did you think of Legacies‘ one-two punch of nostalgia with Klaus and Caroline? Grade the finale below, then drop a comment with your full review.