Home » TV & Movies » Shang-Chi and the Legend of the Ten Rings Post-Credits Scenes: What They Are and What They Mean for the MCU

[Editor’s note: The following post contains spoilers for “Shang-Chi and the Legend of the Ten Rings” and its post-credits scenes.]

Turns out, even in the frankly overstuffed Marvel Cinematic Universe, there are still heroes to be found and fresh adventures ahead. Case in point: Destin Daniel Cretton’s charming and entertaining “Shang-Chi and the Legend of the Ten Rings,” which introduces moviegoers to the (still growing, even as the credits roll) powers of Shang-Chi (Simu Liu) as he, plus best pal Katy (Awkwafina) and estranged sister Xialing (Meng’er Zhang), grapple with the legacy of the eponymous Ten Rings, as long possessed by Shang-Chi and Xialing’s father Wenwu (Tony Leung).

Bolstered by the awe-inspiring fight choreography of recently deceased second unit director and bonafide stunt action badass Brad Allan (the film is dedicated to Allan, who passed away earlier this month), “Shang-Chi and the Legend of the Ten Rings” doesn’t just boast the best action of the MCU, it manages to do it with two (two!) eye-popping action sequences that unspool before the film’s first act is over.

Infused with the grace of martial arts, the raw power of a star who actually practices his own stunts, and the kind of cogent sequences that will surely make audiences marvel at knowing what the hell is going on at any given minute (apparently, a major ask in the world of the MCU), “Shang-Chi” may be built on familiar lines, but in the moments when it’s allowed to be its own film, it’s a vastly different (and vastly superior) film compared to its predecessors.

But, of course, it does have to adhere to certain MCU guidelines, including a pair of post-credits scenes that further orient the film inside the wider universe and set the stage for more battles to come for Shang-Chi and his family and friends.

[One more time: Spoilers ahead for both “Shang-Chi and the Legend of the Ten Rings” and its post-credits scenes.]

1. A Trio of Superheroic Pals Try to Unlock the Mystery of the Rings

After the concluding events of the film (read: a big battle in Shang-Chi’s mother’s mystical village), Shang-Chi and Katy return to San Francisco, eager to share their wild stories with friends and try to acclimate to a very new world. The film ends with the duo — who may now be romantically involved? — getting whisked away from a dinner with pals by Wong (Benedict Wong), with the first post-credits scene picking up inside one of the Sanctums of the Masters of the Mystic Arts.

There, he and his two new friends are joined by holograms of both a sling-wearing Bruce Banner (Mark Ruffalo) and Captain Marvel (Brie Larson), who are eager to unpack exactly what the Ten Rings are. For now, they’re a mystery, a crazy power source that has never appeared in any known codex, a beacon sending some kind of signal, and they’re way older than even Wenwu thought they were (he possessed them for 1,000 years, and that seems to be only the tip of the iceberg when it comes to their age). 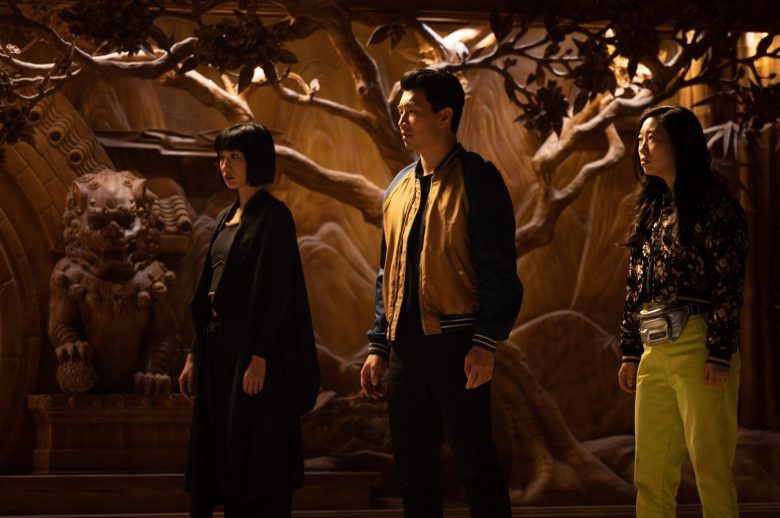 “Shang-Chi and the Legend of the Ten Rings”

Before we can learn more, Captain Marvel is called away, cutting short a chat that seems primed to inspire far more questions than answers. Wong winks at his new pals, “Welcome to the circus,” and while that’s not exactly a Nick Fury-issued “Welcome to the Avengers,” it’s pretty damn close. The trio opt to celebrate the new alliance (and blow off some steam) with a quick visit to a local karaoke room, where they happily trill Eagles’ “Hotel California,” a song that has been a recurring motif throughout the film (Katy likes to sing it to distract bad guys; this works more often than not).

The film also ends with the revelation that Xialing is in the process of closing down her father’s old Ten Rings squad, including the training facility where both she and Shang-Chi learned their serious skills (though Xialing had to practice in secret, as Wenwu was not interested in training girls). It makes sense: the Ten Rings organization is, at best, kind of iffy (even if they did help Shang-Chi and the gang during their key battle), an outdated idea that has really only brought pain to people.

But as Xialing moves through her old bedroom, at first appearing to be packing up, the scene takes a turn: new ally Razor Fist (Florian Munteanu) appears and tells her, “They’re waiting.” Uh, who would that be? It’s a group of girls, all of whom are training up in the old Ten Rings style. Xialing isn’t dismantling the group as she told her brother, she’s retrofitting it into what she wanted it to be: a place where women can be taken seriously. And while that’s a fine idea — and certainly the MCU needs more powerful women — it also feels discomfiting. Is Xialing just doing this for her own sake, or is she really going to launch something that might put her into direct confrontation with her own brother?

We’ll find out either way, as the last stinger hits the screen: “The Ten Rings Will Return.” Oh, will they?

Disney will release “Shang-Chi and the Legend of the Ten Rings” in theaters on Friday, September 3.

As new movies open in theaters during the COVID-19 pandemic, IndieWire will continue to review them whenever possible. We encourage readers to follow the safety precautions provided by CDC and health authorities. Additionally, our coverage will provide alternative viewing options whenever they are available.