“Why are you telling me that you tipped your manicurist? Let me know when you get on your knees and scrub her feet while she looks at your phone,” Yang says 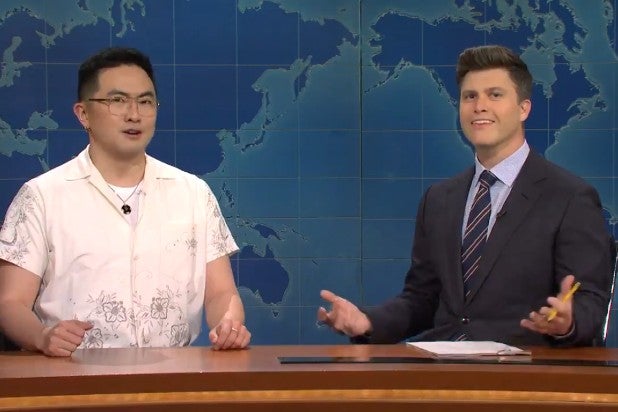 In an appearance during “Weekend Update” that started jokey but turned emotional, “SNL” cast member Bowen Yang talked about his feelings of uncertainty and resolve amid the surge in violence against Asian-Americans, and urged people to “do more” to stop it.

The bit started with Yang bringing up the way people online have reacted to the recent uptick in violence against Asian-Americans, and then describing what he said were several helpful lists of things to do to help. Of course, the lists Yang showed were highly specific to his interests, like “Amplify these Asian voices who want more Paneras in North Brooklyn.”

After the third such item, “Weekend Update” anchor Colin Jost asked “is this actually helpful to all Asians?”

“Maybe. I don’t know Colin, maybe, what can I say to help how insanely bad things are?” Yang replied. “If someone’s personality is ‘punching Asian grandma,’ it’s not a dialogue. I have an Asian grandma, you want to punch her, there ain’t no common ground there.”

“I see my friends donating and I tell them that’s great, but then I also tell them ‘do more.’ Like, ok, you’re ordering from Chinese restaurants? Great, do more,” Yang continued. “Let me know when you feed your white kids chicken feet. You cried during ‘Minari’? Congrats, I was sobbing into my boner for Steven Yeun.”

“Why are you telling me that you tipped your manicurist? Let me know when you get on your knees and scrub her feet while she looks at your phone. Do more,” Yang added.

“You’re right, I should do that,” Jost said in response.

“Look I can’t address any of this without bringing up class of gender or imperialism. I don’t even want to be doing this ‘Update’ piece, I wanted to do my character, ‘Gay Passover Bunny,” but too smart for the show,” yang said.

“I’m just a comedian, I don’t have the answers, but I’m not just looking for them online, I’m looking around me,” Yang continued. “The GoFundMe for Xiao Zhen Xie, the grandmother who fought back against her attacker, raised $900,000. Which she immediately gave back to the community. That’s where we are as Asians. Now come meet us there.”

“In Mandarin, there is a cheer that goes ‘Jiayou,’ which basically means ‘fuel up.’ I don’t know what’s helpful to say to everyone, but that’s what I say to myself. Fuel up. Do more. It’s the year of the metal ox, which basically means a car, so everyone get in, buckle up, it’s no pee breaks, we ride at dawn, grandmas,” Yang concluded.

Watch the whole clip below: