Just in time for this weekend’s release of Rocketman (see tickets and showtimes here) we’ve found five new collaborations that celebrate the iconic style, music and attitude of Elton John. The list includes three official collaborations with Paramount, the studio behind Rocketman, who are no doubt hoping to capitalize on the film’s critical buzz and star power to turn some dollars at retail stores as well.

John, whose career spans more than five decades, has left an indelible legacy both in the music world and fashion world, with his colorful, bohemian outfits and signature wide-rimmed specs serving as a calling card of sorts for him through the years. See how these designers and artists interpreted John’s flair for style and pay tribute to his legacy with these limited-edition releases.

Paramount has teamed up with retailer Lucky Brand on an Elton John-inspired clothing collection, which celebrates the performer’s iconic style and new biopic. The limited-edition collection features three vintage-inspired T-shirts for men, and two tees and a casual sweatshirt for women, and pieces are available for purchase right now on LuckyBrand.com.

Some of the pieces pay homage to retro concert posters, while others feature iconography from John’s “Rocket Man” single, released in 1972 as the lead track from the singer’s fifth studio album, “Honky Chateau.” Sizes range from S to 2XL for men, and XS to XL for women.

Paramount says the apparel collaboration was a natural extension of the film, as it seeks to find new ways to promote the movie to fans both old and new.

“Rocketman tells the story of how Elton John transformed himself from a working-class kid to one of the most authentic, influential and inspirational artists of all time [and] Lucky Brand’s rich heritage and rock & roll spirit made them the perfect partner for Rocketman,” says Michelle Hagen, executive VP of worldwide partnership marketing at Paramount Pictures. “Lucky’s capsule collection will allow Elton John fans to express their own individuality and unique sense of style, while honoring the man who was #neverordinary.”

Meantime, online menswear retailer, Mr Porter, is also drawing from Rocketman for a new collection, albeit with a slightly different inspiration. The site is launching a special capsule collection inspired by the “fantastic” style of Elton John’s manager, John Reid (played by Richard Madden in the film). 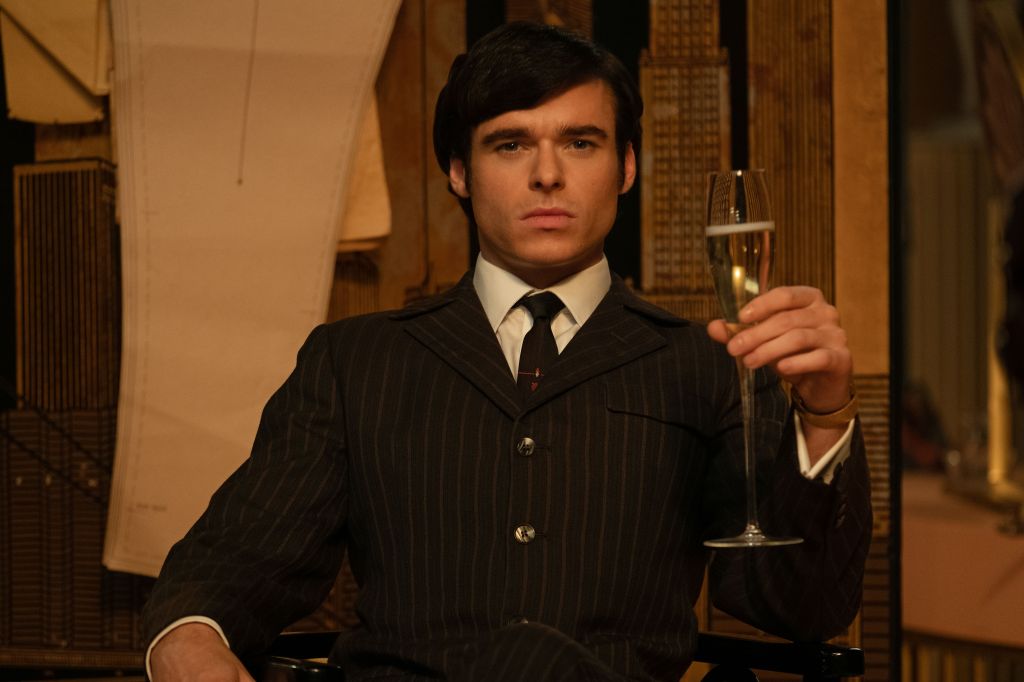 Launching under Mr Porter’s in-house “Kingsman” label, the 16-piece collection features tailored suits, shirting, a tuxedo jacket and ties, in apropos prints and fabrics like paisley, velvet and flannel. The finishing touch: a pair of leather Chelsea boots, the footwear staple made famous by rockers in London in the Sixties.

While John was known for his flamboyant and often genre-bending style, Rocketman producer Matthew Vaughn, who collaborated with Mr Porter on this collection, says Reid was more buttoned-up, frequently seen in tailored suits and dapper accessories (think jacquard ties and pocket squares).

Vaughn directed the Kingsman franchise that inspired Mr Porter’s first film collaboration, and returned to work with the e-tailer again on this project. Prices for the “Rocketman by Kingsman” collection range from $85 for a pocket square, to $1,995 for the velvet jacket. Shop the collection online at MrPorter.com. 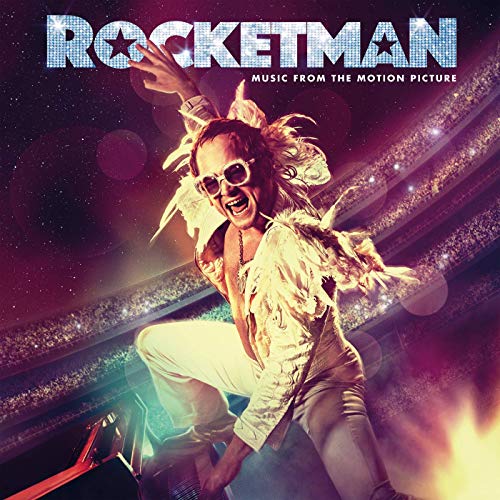 While Elton John has released a number of “Best Of” collections, including a double-CD set called “Diamonds” in 2017, he’s passing off the mic to actor Taron Egerton on the new Rocketman soundtrack. The actor, who portrays John in the film, takes lead vocal duties on most of the soundtrack, which includes songs like “Saturday Night’s Alright (For Fighting),” “Tiny Dancer, “Your Song” and the title track, “Rocket Man.”

Producer Giles Martin worked closely with the filmmakers to rework the songs both for Egerton’s voice and a 2019 audience, adding new arrangements and switching up the tempos on some of John’s most recognizable tunes. The soundtrack was recorded at London’s legendary Abbey Road Studios, further lending some gravitas to the proceedings. Purchase: $11.97 on Amazon.com

John does appear on the last song of the soundtrack, teaming up with Egerton on a new track called “(I’m Gonna) Love Me Again.” The uptempo track was written by John and longtime lyricist Bernie Taupin, and co-produced by frequent Adele collaborator, Greg Kurstin. “Love Me Again” is the first new material from John since his 2016 album, “Wonderful, Crazy Night” (stream here).

Gucci debuted an Elton John capsule collection last year, reportedly after the Italian brand’s creative director, Alessandro Michele, was introduced to the singer at an Oscar afterparty in LA (by Jared Leto no less). This unisex Gucci T-shirt riffs off the lyrics to “Somebody Saved My Life Tonight,” taken off John’s 1975 album, “Captain Fantastic and the Brown Dirt Cowboy” (stream here).

The T-shirt is made in Italy and is available in sizes XS to XXL. Other styles and colors are available online. Purchase: $550.00 on SSENSE.com. 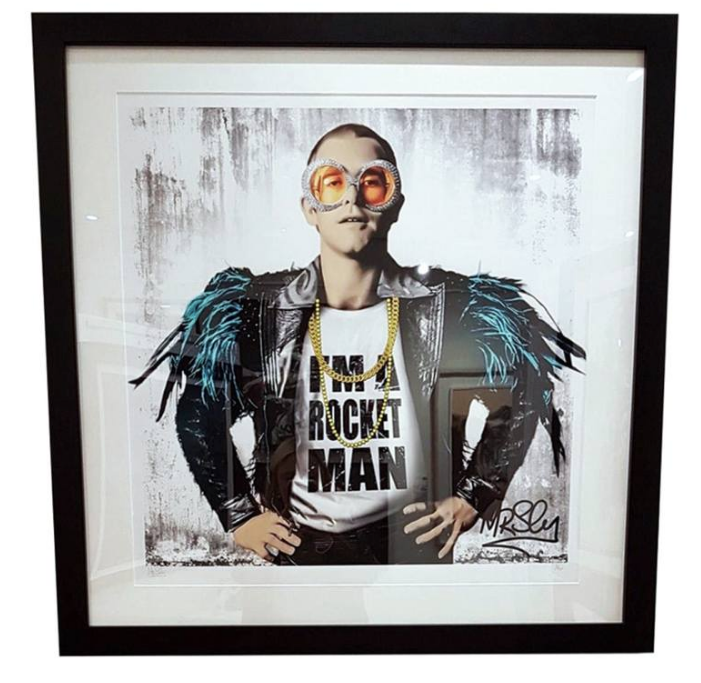 For something a little more special (and a lot more collectible), fans of Elton John will want to browse the selection of limited-edition artwork inspired by the singer and his music at SaatchiArt.com. The famed gallery owners and art curators have a number of John and Rocketman-inspired pieces available, including this print from UK-based artist, Mr Sly, known for his mixed media collages and graphic interpretations of pop culture.

This giclee print comes framed and is available in an edition of 30. Each piece is individually signed, dated and numbered by the artist. Purchase: $790.00 on SaatchiArt.com. 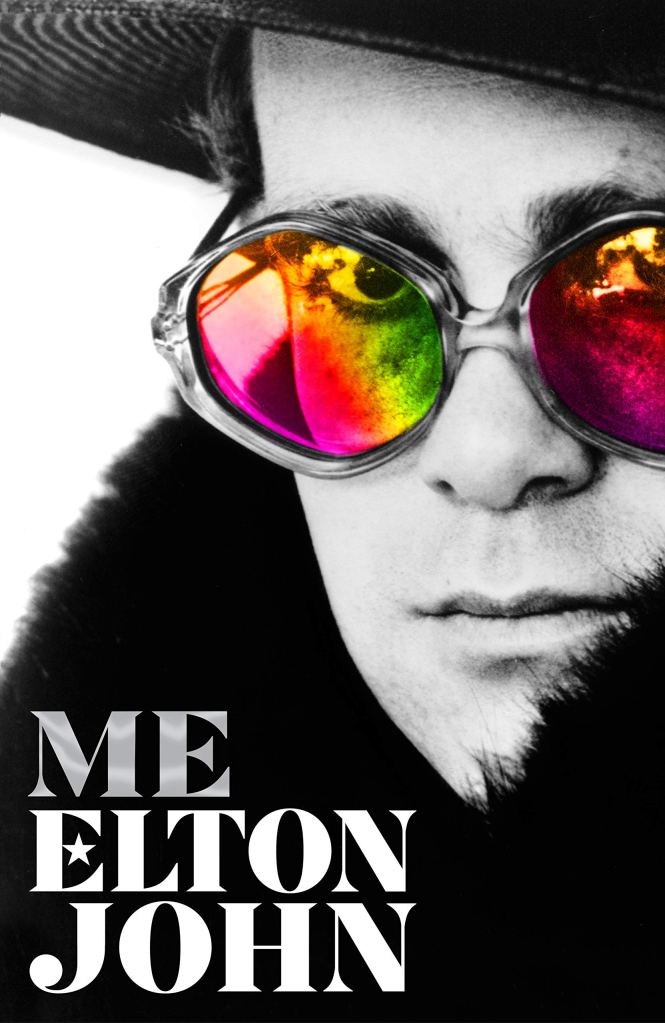 Elton John has set an October release date for his first official autobiography. The title, recently announced as Me, references the deeply personal and — in John’s words — “cathartic” experience he had in writing the book. Publisher Macmillan says the book will give audiences a “no-holds-barred account” of the often controversial and flamboyant singer’s life, along with a glimpse into how many of his most popular songs came to be.

John, who is currently in the middle of his “Farewell Yellow Brick Road” tour (see tour dates and tickets here), has said that this will be his last time on the road, as he looks forward to more time at home with husband David Furnish and their two children, while pursuing projects outside of music. The tour began in Pennsylvania last September and will hit five continents, spanning more than 300 shows, before reaching its conclusion at the end of 2020. Pre-order: “Me,” $21.99 on Amazon.com (note: if the price decreases between your order time and the release date, Amazon will charge you at the lowest price).

Editorial products are independently selected. If you buy something from our links, PMC may earn a commission.