Bradley Walsh was joined by Steve, Jennifer, Amy, Paul for another round of The Chase. As for who was sitting in the hot seat, it was Anne ‘The Governess’ Hegerty’s turn to wipe out the team and stop them from taking home any money. During Amy’s cash builder, however, the pressure of the show built up so much and Bradley took the chance to wind her up with it.

Steve managed to answer eight questions correctly and kicked off the jackpot with £8,000 after beating Anne at the table.

Second player, Jennifer, managed to accumulate £5,000, but unfortunately, one too many tricky questions saw The Governess boot her out.

When it was Amy’s turn to stand opposite Bradley for her cash builder, those watching at home saw the young woman get off to a stellar start, but lost her confidence after getting a question wrong.

The final question Bradley asked the player was: “The name of which naval vessel means below the surface of the sea?” 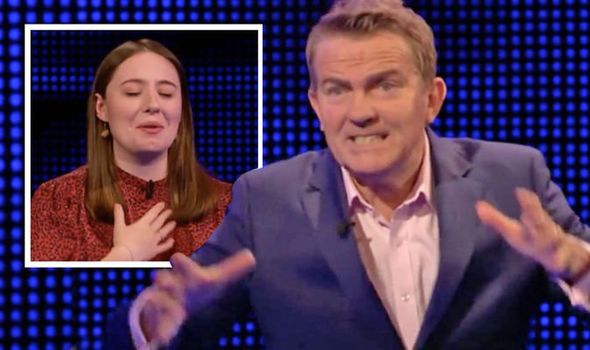 We will use your email address only for sending you newsletters. Please see our Privacy Notice for details of your data protection rights. The Chase: Darragh Ennis exposes ‘golden rule’ to remember answers

“Submarine,” Amy answered but the clock had already stopped.

“The what?” Bradley asked and Amy reiterated: “The buzzer made me jump!”

“Oh did it. Are you normally of a nervous disposition?” He continued.

“I am. I shouldn’t say that should I?” She laughed awkwardly and Bradley agreed: “You shouldn’t.” 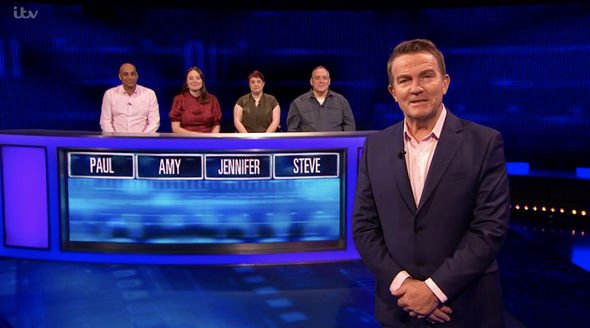 “Okay, I am very confident,” Amy commented instead.

“Just don’t be nervous. You ready?” Bradley asked calmly and before Amy answered, he shouted: “Time to face the chaser.”

ITV viewers saw her jump for a second time and put her hand to her chest before begging: “Don’t do that.”

“Time to face the chaser – come on,” Bradley said, softer this time. 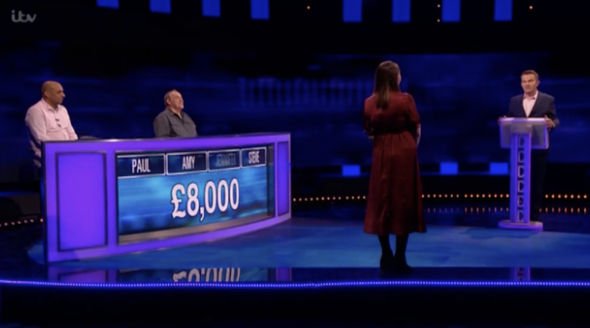 Amy managed to answer all the questions correctly and add £5,000 to the jackpot.

When it was Paul’s turn, following a steady cash builder, Anne was too clever to beat.

With only two in the final chase, the contestants had to get an almighty number of steps if they were in for a chance of taking home some of the prize money.

Together, Steve and Amy managed to answer 13 questions correctly, combined with their two step head start for a total of 15.

Despite two attempts to pushback and two executed, Anne beat the players.

The Chase airs weekday evenings at 5pm on ITV.