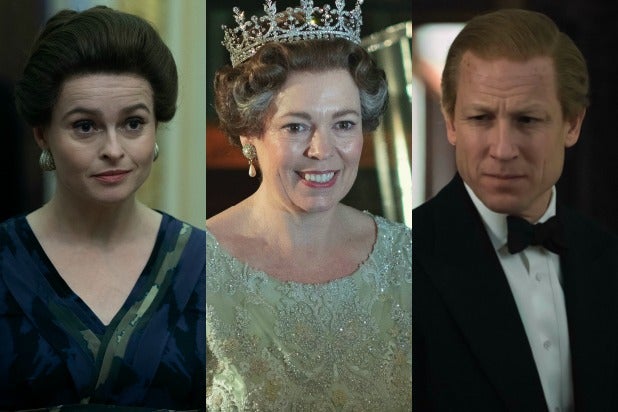 “The Crown” launches its fourth season Sunday on Netflix, marking the final installment that will star Olivia Colman as Queen Elizabeth II before she passes her throne on to Imelda Staunton for the remainder of the British royal family drama’s run.

And though fans have yet to see the farewell performances from Colman and her co-stars, including Helena Bonham Carter as Elizabeth’s Princess Margaret and Tobias Menzies as the queen’s husband Prince Philip, “The Crown” stars wrapped shooting long enough ago that they’ve already said their goodbyes to their bittersweet iconic characters.

Well, for some it was just “bitter,” as Bonham Carter joked during an Aug. 6 press day.

“I’m very sad that it’s over. But it’s time that she was played by somebody else,” the actress, who took over the role from Vanessa Kirby after Season 2, said. “There comes a point where I feel like I wasn’t maybe concentrating as much as I should toward the end, because of just the sheer dint of doing it for so long. But, she’s just a great gift of a part. And she’s been so fun to have around. I’ve had a real sense of somebody sitting with me. Sometimes as an actor you have– it’s like having a hotel and somebody comes into stay. And she’s been a real fun company and a help.”

Season 4 of “The Crown” will cover Queen Elizabeth and the British royal family during the Princess Diana (played by Emma Corrin) and Prime Minister Margaret Thatcher (Gillian Anderson) era. Season 3 of “The Crown,” which launched last November, left off in 1977 at the Queen’s Silver Jubilee. Seasons 5 and 6 are expected to cover the late ’90s and early ’00s.

Taking over as the leads for “The Crown’s” final two years, Seasons 5 and 6, will be Imelda Staunton as Queen Elizabeth II, Lesley Manville as Princess Margaret, and Jonathan Pryce as Prince Philip.

At the time of the August press conference, only Staunton and Manville’s castings had been announced by Netflix and both Colman and Bonham Carter were in awe of their replacements.

“I mean almost, I wish she wasn’t quite as good,” Colman, who became the show’s queen following the exit of Claire Foy after the first two seasons, joked about Staunton. “All you’re going to get the first week is, ‘Thank God she’s there. So much better than last time.’”

Bonham Carter jumped in to say, “And there’s going to be that thing at the end, probably, ‘Rate Your Margarets,’ ‘Rate Your Queens,’ ‘Rate Your Philips’” to which Menzies gave a concerned, “Oh no.”

The current Prince Philip — who was proceeded by Matt Smith in the role — was not able to talk about Pryce’s casting at the time, teasing reporters with “Who could it be” though he did say he’ll “absolutely” be excited to “kick back” and tune in to watch the new royal in Seasons 5 and 6.

Colman and Bonham Carter and willing to offer tips to the new queen and princess — but only if they want them.

“If she calls me I’d be so excited. Imagine,” Colman said of Staunton, saying her best advice would be “Good luck. The wig is itchy. Work on your walk.”

“Vanessa, I will say, she was so generous and she told me all sorts of things,” Bonham Carter said of Kirby’s help after Season 2 ended. “And I’ll wait for Lesley’s call. She might well not be remotely interested in what I have to say. But it’s like handing a baton, it’s like a relay race — but it never comes back. I want to hand her my cigarette holder and say, ‘Good luck with this.’ That would be nice. I wouldn’t mind having a tea with Vanessa and Lesley, if she’s interested… I mean, I could start a Margaret school now.”

In July, Netflix and “The Crown” creator Peter Morgan revealed “The Crown” will run for six seasons after all, following their January announcement that Season 5 would be the drama’s final year — despite Morgan having stated for years that his vision for “The Crown” had always been a six-season run.

Along with Staunton, Manville and Pryce, the previously revealed cast members for Seasons 5 and 6 — which will begin filming next June, meaning it won’t premiere until 2022 — include Elizabeth Debecki as Princess Diana, with Dominic West in talks to play Prince Charles, who is currently portrayed by Josh O’Connor.

As it’s time to say goodbye, Bonham Carter, Colman and Menzies acknowledge what a gift it’s been to lead “The Crown” for two seasons.

“There’s something about this job. It’s been over two years that we’ve been around each other. That never happens. Well, I’ve never done something like this,” Bonham Carter said, sitting next to Colman and Menzies. “But there’s been an ease to it and it’s been so nice to know what the hell we’re doing from one month to the next. It’s been a real container. And then also, I know it’s an extraordinary outfit, the people who run ‘The Crown.’ They’re so immaculately well-run a ship. And I’ve had such a great time. It’s been a really great job to have and I can’t believe I’ve been paid to do it as well.”