My Dinner With Alan: A Sopranos Session teaser released

The Sopranos ending is one of the most famous moments in TV history and has had audiences scratching their heads for two decades. The final scene saw Tony and his family sitting down to dinner in a restaurant as the paranoid gangster looked up at a mysterious man entering the room. The screen simply cut to black and that was it, with some fans believing Tony was whacked, while others reckon showrunner David Chase whacked the audience.

The restaurant booth from The Sopranos’ final scene has been included in a new documentary film on the series titled My Dinner With Alan: Sopranos Session, which streams for one-night-only on December 27. The movie is in three parts involving conversations with the critics, members of the cast and Chase himself.

Big Pussy star Vincent Pastore features in the middle section with co-stars Federico Castellucio, Arthur J.Nascarella and Vincent Curatola. The four Italian-Americans met at top Little Italy restaurant Il Cortile to talk about their experiences on the show, the highs and lows, while paying tribute to the late great James “Jimmy” Gandolfini himself.

Speaking exclusively with Express.co.uk, Vinnie Pastore said of filming the dinner conversation: “It was easy, it was really easy!”

The Big Pussy actor was invited along by Furio star Frederico, while he knew former real-life cop Arthur (Carlo Gervasi) from starting out late in acting together. Plus, the 74-year-old got to know his namesake Vincent Curatola (Johnny Sack) on a Gotti movie they made together back in 1996. 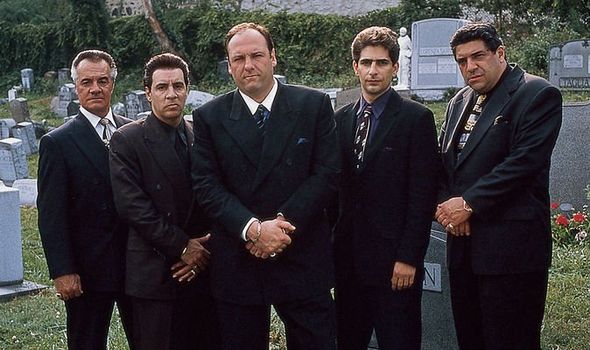 We will use your email address only for sending you newsletters. Please see our Privacy Notice for details of your data protection rights. The Sopranos: How does James Gandolfini’s son feel about playing Tony?

Vinnie Pastore sees himself as a street actor, having learned the craft from his life experiences but never felt he would be part of something as huge as The Sopranos.

He said: “We’re part of television history. You don’t think that’s ever going to happen in your life when you have these dreams of being an actor. We all have a legacy now because of Sopranos.”

The actor said how he went to Washington National Zoo with his daughter recently and people would be pointing him out saying, ‘That’s Big Pussy!’ Only a part of the show before his character was whacked in season 2 for being a rat to the cops, Vinnie continued to watch and has his own interpretation of that divisive Sopranos ending.

The 74-year-old said: “They left it up in the air for us to talk about 20 years later. I think David left it open because he didn’t know if Jimmy wanted to continue. You’ve gotta remember, Jimmy was tired, man. That was his show. He was getting burned out.”

Vinnie claimed: “I think they left it like that so you don’t know what’s going to happen. Will there be a sequel? You’re damn right there will be a sequel. One of these days HBO’s gonna put their heads together and say, ‘Let’s go make some money and make a movie for HBO.’

“Maybe Jamie-Lynn’s Meadow Soprano runs the Mob. It’s all about dollars and cents. If HBO realise they can make a lot of money by putting something together, they will put it together, with or without David Chase, I’m telling you, man!

Asked how he felt about being whacked so early on in The Sopranos, Vinnie isn’t bitter about it.

Vinnie said: “Well when you’re making something you don’t know how big it’s going to get. We were into out second year and I’m thinking maybe they’re gonna have one more. You didn’t think the show would go seven years, but it could have gone 10 [in the end].

The showrunner said, “Hey, I’ve gotta get rid of ya” and Vinnie wanted to say, “Well, what about my contract?”, but knew he was talking to the boss and took the situation in his stride replying, “You give me that football and I’m gonna make a touchdown.”

He explained: “What was important to me was what I was gonna get out of it while I was on the show. So David and Terence Winter [Sopranos screenwriter] gave me the opportunity to do some acting. And I’m telling you man, I used to sit in Jimmy’s trailer and I’d say, ‘Help me with this stuff.’”

Of course, Chase promised Vinnie he could come back as Big Pussy’s ghost every once in a while, which he did on several occasions.

Vinnie summed up: “Yeah I was disappointed I wasn’t part of the rest of the thing, yeah I could have made a lot more money, but it is what it is and if you can’t accept that, something’s wrong.”

Next March sees the release of The Sopranos prequel movie The Many Saints of Newark, with Hawaiian-Texan Samson Moeakiola portraying the younger version of Salvatore ‘Big Pussy’ Bonpensiero opposite Jimmy’s son Michael Gandolfini as a young Tony Soprano.

Vinnie said how Chase got him in contact with Samson who has been attending Vinnie’s acting classes, which focus on preparation over method. As the original Big Pussy says, who knows, maybe we’re in for more Sopranos in the future if the movie is a hit.

My Dinner With Alan: A Sopranos Session is a one-night-only event, streaming exclusively on DICE on the 27th December at 8 PM. Virtual doors open at 7 PM. To book your tickets now, click here.