Norm Macdonald, the famed comedian who made a name for himself in the early ’90s on “Saturday Night Live,” has died from cancer, according to Deadline. He was 61 years old.

His death was announced to Deadline by Brillstein Entertainment, his management firm. The publication reported that “the comedian’s longtime producing partner and friend, Lori Jo Hoekstra” was with him when he died, and said Macdonald had been dealing with the diagnosis for “nearly a decade” in private “away from family, friends and fans.” Hoekstra also mentioned Macdonald’s determination to focus on his comedy despite his diagnosis, saying, “He never wanted the diagnosis to affect the way the audience or any of his loved ones saw him. Norm was a pure comic. He once wrote that ‘a joke should catch someone by surprise, it should never pander.’ He certainly never pandered. Norm will be missed terribly.”

Macdonald kept working up until his death, having a movie, “Back Home Again,” in post-production, per his IMDb. He was also scheduled to appear at the New York Comedy Festival in November, reported Deadline. The comedian had recently lent his voice to numerous projects as well, including Seth MacFarlane’s “The Orville” as Yaphit and the Adult Swim series, “Mike Tyson Mysteries” as Pigeon. It seemed he kept his word, focusing on his craft throughout his illness.

Norm Macdonald stood out from other comedians 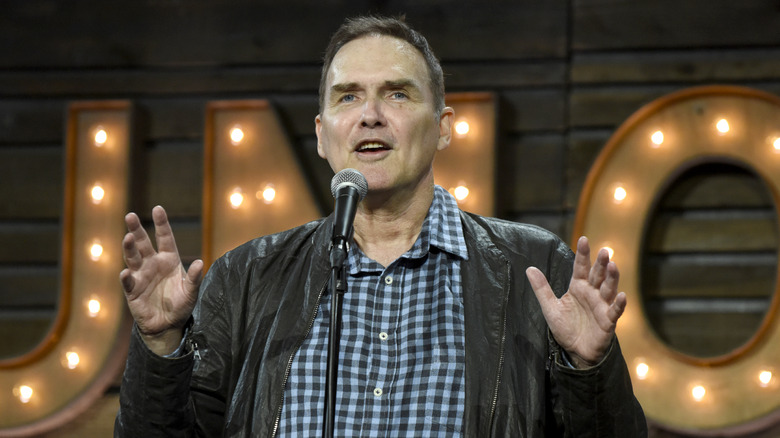 Although Norm Macdonald had a consistent career since he first broke into the business in the early ’90s, it wasn’t without controversy. Born in Québec, per his IMDb profile, Macdonald made his way to Hollywood, becoming a writer for “The Dennis Miller Show” and “Roseanne.” His work on the latter show attracted the attention of Lorne Michaels, who brought him onto “Saturday Night Live.” While he participated in numerous sketches, he received the most acclaim for his work as the anchor of “Weekend Update” for three seasons, reported Deadline. He was notable for his “deadpan style,” which was markedly different from “the slapstick approach of Chevy Chase and toward the more barbed political approach of his successor Colin Quinn,” the outlet stated.

However, his refusal to go easy on O.J. Simpson during the former football player’s trial — despite pressure from NBC — caused him to be fired from the show, a controversial move at the time. According to Deadline, Don Ohlmeyer, president of NBC’s West Coast division, was supposedly a friend of Simpson’s.

Though Macdonald did leave the show in disagreeable circumstances, he continued to work in the comedy industry, expanding his repertoire, including helming a talk show for one season on Netflix, per IMDb. He will be missed.