This Morning viewers were left astonished when a guest appeared on the programme to raise awareness of climate change in a unique way, sitting naked on the sofa in the studio.

Laura Amherst, a protester for Extinction Rebellion, was invited onto Thursday’s edition of This Morning to speak to Phillip Schofield and Holly Willoughby about why she uses her bold method to bring attention to her cause.

The banner on the TV screen about Laura stated: ‘I protest topless to help save the planet,’ as the activist told Phillip and Holly that in an ideal world, people would listen to what she had to say about climate change straight away, and so she wouldn’t need to go to extreme lengths to get their attention.

While Phillip and Holly questioned Laura about her activism, some viewers watching the show expressed their shock over Laura making an appearance stark naked, with several questioning if there was any sort of blanket or cover on the couch. 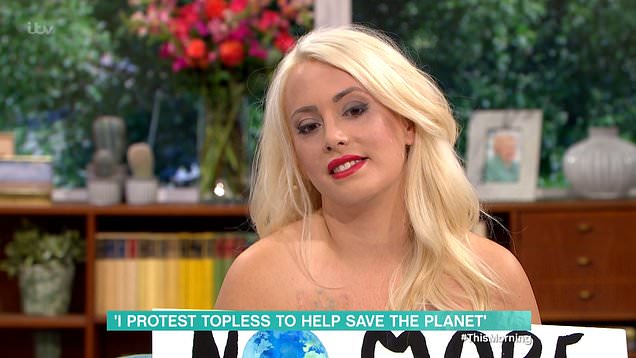 ‘Is she fully naked I hope they dettol the sofa afterwards,’ one person tweeted, while another asked: ‘#ThisMorning is her bare bottom on that sofa?’

‘Sorry but…is her hooha just nakedly sat on that couch? Philip doesn’t know where to look,’ another said.

‘The producers could have covered that bit of the sofa with clingfilm or tarpaulin before the lady sat down #This morning,’ someone else wrote.

However, another viewer praised Laura for how she composed herself during the interview, saying: ‘Omg well done that topless woman!!! Speaking so well, so calmly and simply asking that you think about the cause and why these actions to draw attention and disrupt are necessary. Amazing, well done #ThisMorning.’

This Morning airs weekdays at 10am on ITV.