Wedding-day antics can go wrong in any number of ways. The last episode of “Trying” Season 2 is an ending filled with surprise boyfriends, unexpected proposals, emergency news, and a first dance set to bebop jazz. Any of those things in isolation could send a TV comedy careening from light-hearted fun into disaster. But this Apple TV+ show has proven repeatedly that it can handle all the absurdity in the lives of Nikki (Esther Smith) and Jason (Rafe Spall) while still making their journey together feel real.

As the director of both seasons, Jim O’Hanlon has been keeping his finger on the pulse of how the shows wild twists and turns play out. Along with series writer/creator Andy Wolton, the two have found a winning, dependable test for whether or not “Trying” works: Trust the couple at the center.

“Big physical comedy can get very broad if you’re not careful. But I think we have several things in our favor,” O’Hanlon said. “One is you know the characters now. They’re real and three-dimensional so when they get into crazy scrapes, you go with them. Two is Rafe and Esther who, to me, could sell the most ludicrous thing you’ve ever seen in your life. And three is the writing. I think that’s what’s fun. Desperate people make desperate choices and then often you get great comedy out of that.”

That belief gives credence to some of the madcap-trending sequences in Season 2. Is it a little bizarre that Nikki and Jason would work their way onto someone else’s property, fueled in part by desperation and jealousy? When the two are sharing a tender moment in a treehouse, lit by the string of overhead lights, it almost doesn’t matter. “Trying” always manages to find a way to give both them and the TV audience watching a tender regrouping moment. Jason can call attention the bonkers situation they’ve found themselves in, or Nikki can point out how much it shows they have each other’s backs through it all.

Another aspect that gives Season 2 a real set of consequences is that the two are no longer tackling an idea, but an actual, tangible change. The series’ opening episodes, culminating in the panel hearing O’Hanlon mentioned, hovered around whether they would follow through on their plans if they were approved to adopt a child. These newer episodes find them making good on that promise. That overarching sense of change also goes for Erica (Ophelia Lovibond) and Freddy (Oliver Chris), whose marital strife means that they spend most of Season 2 apart. After being together for a while, Esther’s sister Karen (Sian Brooke) and fiancé Scott’s (Darren Boyd) looming marriage carries some finality with it, too. 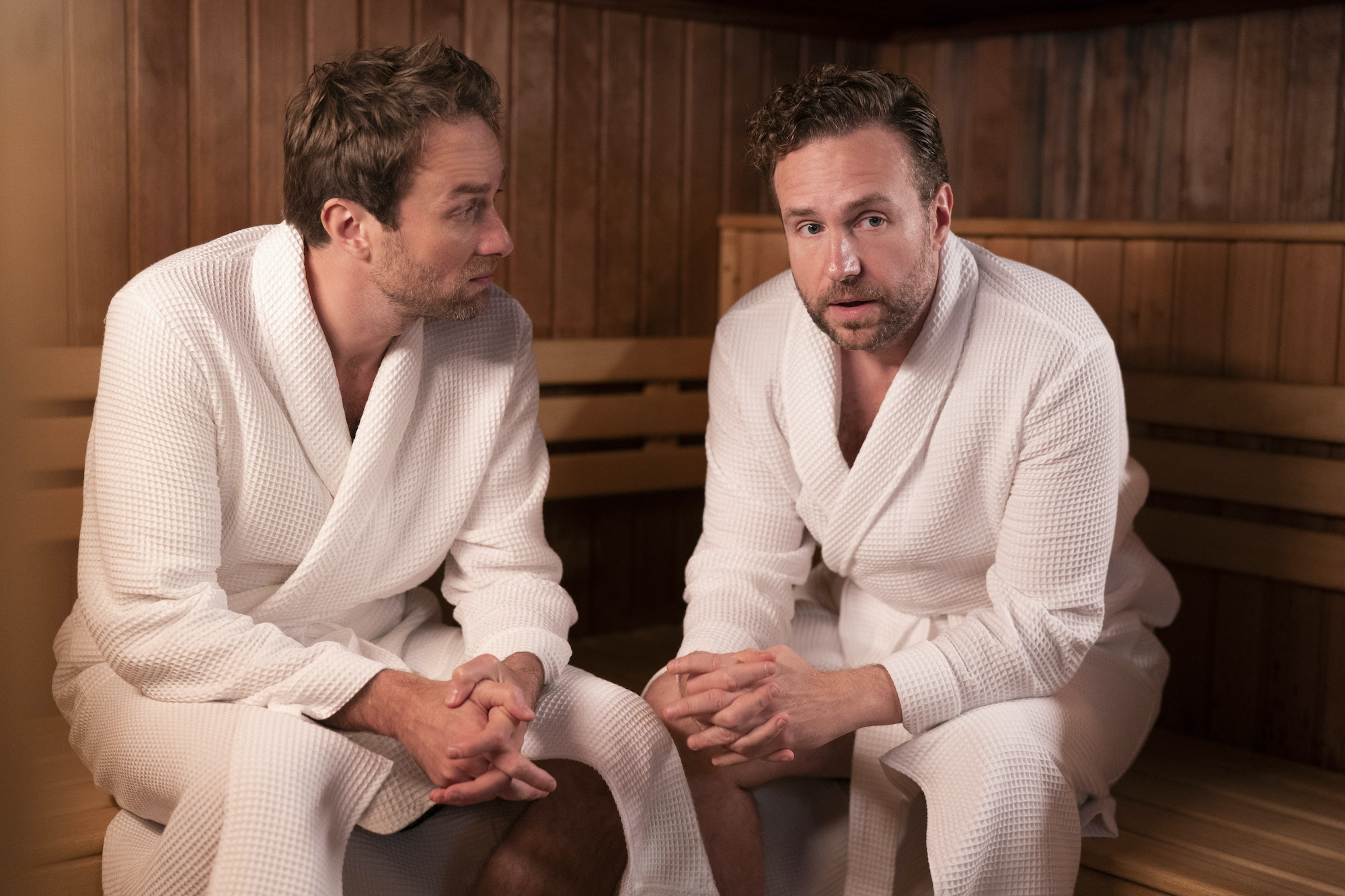 “It’s not just about bureaucracy and hoops and forms and proving yourself. Part of the writing process was us making sure that we should feel at the end of Episode 1, that this is The One — this is the kid they’re going to get. And that’s dashed. So you just want to be totally with them when it gets dashed,” O’Hanlon said. “We worked hard at finding the points at which they sort of give up. There’s a point at the end of Episode 5 where they just say, ‘We’ve got to just take this down’ or Episode 6, ‘It’s not gonna work.’ They’re tantalizingly close. So in a way, the stakes are higher. That was important for us to track the whole way through. But then against that, we were also trying to broaden the world.”

In ways both expected and unanticipated, that heightened sense of Season 2 was matched by the conditions under which it was made. Filming in late 2020, testing and distancing was, like other shows produced during that time, a new everyday norm. When O’Hanlon contracted Covid-19 during filming, it led to an unconventional directing setup.

“I got Covid for two weeks in the middle of the shoot, and so I directed from my bedroom for two weeks. The vast majority of the second half of Episode 2 I wasn’t there for. I had a feed at home and I was on Zoom,” O’Hanlon said. “My head was on an iPad. I would call ‘Cut’ and I would say, ‘Can I talk to Rafe?’ and they would bring me across to talk to Rafe and then bring me across to talk to Imelda [Staunton]. It was the day after the American election, so I was doing my stuff up in the bedroom, then I’d run down, switch channels downstairs, and watch the American election coverage on CNN. And then I go back up and reset the shot. It was a bit mad, I must say.”

Aside from the daunting undertaking presented by those two weeks, other protocols affected some the most fundamental parts of the show. Nikki and Jason, in addition to being very close in theoretical ways, aren’t afraid to show their affection for each other. Unlike other pairs on the show that are often more distant, Nikki and Jason are typically curled up together in their downtime. One of the sweetest touches throughout “Trying” is that, whenever the two face some imminent problem, they check in with each other with a quick kiss before they open the door or turn the corner.

Under Covid-prompted rules, all interactions like that had to be thoroughly approved and agreed upon well in advance of each take. Despite removing some of that spontaneity, Smith and Spall were able to bring their comfort with these characters to the screen.

“As a director, I like to have a Plan A for blocking, but I really like to let them to go with whatever their instinct is. I just think they know the characters so well and they’re so instinctive as actors,” O’Hanlon said. “We had to be a bit careful this time with Covid. I got into trouble on Day 2 with the producers because we did a hug that hadn’t been scripted and risk-assessed. So we had to be a bit more careful this time about putting it in the script. But a lot of that is also Rafe and Esther just feeling the characters and knowing exactly what the characters would do at that point.”

“Trying” managed to maintain its freewheeling spirit in other ways, too. Wolton has written every episode in both seasons, and O’Hanlon said that the two are constantly trying to both sharpen and add on to each scene in the run-up to getting it on its feet. Sometimes that means having a few joke alts ready to go on the day. Other times it means adding an extra button on the scene. (Yes, that’s O’Hanlon in a Season 2 finale cameo as the other person in the sauna who’s been listening to Freddy and Jason’s conversation the whole time, unacknowledged until the end of it.)

As the show looks toward Season 3, one of the biggest changes will be having kids more present throughout the season. Casting Princess (Eden Togwell) and Tyler (Mickey McAnulty) as Nikki and Jason’s potential children had huge ramifications for the rest of the series. Once again, 2020 conditions threatened to get in the way, but O’Hanlon is looking forward to continuing the process through to a full season with a different kind of cast member.

“We were casting them knowing that they really wouldn’t have that much to do in Season 2. But they obviously become very important in Season 3. So we had to get people who weren’t going to suddenly grow up or [have] their voices break. We cast everything by Zoom. By the time we came down to the last five or six, I was able to get in a room with them so I could properly direct them and work with them,” O’Hanlon said. “You have to kind of go, ‘Are these kids who are going to be lively and engaged and not going to freeze on the day? Do I like their personality and think it can come across on screen?’ And I think that’s what we got with Mickey and Eden. They have real charisma and energy, and they’re really believable. I think they’re going to be really fun in Season 3.”

“Trying” Season 2 is now available to stream in its entirety on Apple TV+. Season 3 has already been ordered.