The latest skit on ABC's 7.30 has been called everything from "solid gold" to "perfection in two minutes".

But satirist Mark Humphries wants people to know he and his co-writer Evan Williams weren't responsible for every joke in the two-minute video that poked fun at the Labor party – former prime minister Kevin Rudd actually improvised his funniest lines during his mock interview in the sketch. 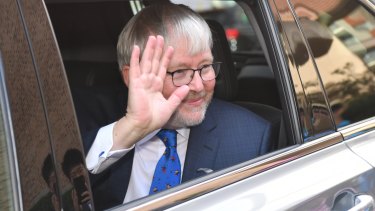 Kevin Rudd poked fun at his 2007 campaign slogan during a viral skit on the ABC’s 7.30 program. Credit:Dean Lewins

But it was Rudd who stole the show with quips such as "Kevin 2027", a play on his successful Kevin '07 campaign, and "my autobiography… it'll put you to sleep [in] no time".

Humphries says he is amazed the skit came together given he tends not to write cameos in the first place.

"Logistically, they're a nightmare," he says. "We're on very tight deadlines and there are very short windows in which we can film. If a person says no or pulls out, you've wasted time and it affects the structure of the sketch."

The satirist said the Rudd cameo only came about because the former Labor leader was in Queensland and had already agreed to an interview for 7.30.

"We went, OK, we'll write those lines and never hear about it again," Humphries says. "It's one of those things where you never believe anything until you see it. How self-depreciating is he willing to be? But when we watched it … he added his own little flourishes. It was like opening a Christmas present.

When asked whether he'd like 7.30 to bump up his political sketches from fortnightly to weekly runs, Humphries says after the cancellation of Network 10 quiz show Pointless he'll "take what [he] can get".

"But we're certainly happy with the fortnightly arrangement," he says. "There are other projects we want to pursue, so it gives us time to work on that. Evan and I want to do a half-hour, scripted comedy. That would be the dream."

7.30's executive producer, Justin Stevens, acknowledged the popularity of Humphries and Williams' satire but said their segment would remain a fortnightly occurrence.

"We went weekly during the election campaign with so much going on politically, and will revert to fortnightly in the foreseeable future," he says. "They're doing an excellent job for us and their segments have been outstanding."