After a year and a half without any new offerings from the MCU, there was no sweeter sound than the Marvel Studios fanfare ahead of WandaVision‘s premiere episode. Until we got to hear the show’s theme song, that is. That’s right: Marvel is doing theme songs now.

At least for WandaVision, which sees Elizabeth Olsen’s witchy Wanda Maximoff and Paul Bettany’s robo-human Vision living a picture-perfect married life straight out of a sitcom. Literally. Each episode is set in a different decade via that era’s classic sitcom, with its own original sitcom theme courtesy of Oscar-winning duo Kristen Anderson-Lopez and Robert Lopez (the Frozen movies).

Ahead of episode 3 — a groovy new chapter inspired by The Brady Bunch with opening credits straight out of the ’70s — the Lopezes broke down the process of crafting jingles for the MCU. Here is their full conversation with ET’s Ash Crossan.

ET: These earworms! I’ve been sitting around singing, “Wanda-Vision, Wa-WandaVision,” and if you go on Twitter, it’s everyone being like, “This theme is stuck in my head!”

Kristen Anderson-Lopez: Bobby was the one who actually said, “If we’re going to do all of these theme songs across the decades, we need something that’ll connect them.” And so he created that motif — the “Wan-da Vis-ion!” — and you can find it in every single one. So, that’s the Where’s Waldo? game to play.

That’s so fun. When you hear Marvel, you don’t typically think of theme music, unless you’re thinking of the animated shows back in the day. How did this come about?

Lopez: We love Marvel. We watch it with our kids. As they got older and older, we kept thinking, “If we could get a job with Marvel then they would think we were cool.” But my friend Matt [Shakman] is the director and he brought us in about a year and a half ago.

Anderson-Lopez: Fun fact, Bobby worked with Matt at Yale. They did a production of The Tempest and he wrote the songs and Matt directed and it took place in the Yale swimming pool.

Lopez: And the echo in there was terrible. But yeah, they pitched us this crazy idea and it seemed like something that no one had ever seen before and like something that would just be so refreshing to work on, a total change of pace from the Disney animated stuff we were doing. The princess genre that we’ve been working in. So, it was an automatic yes, and then writing the songs was much easier than expected. We were just on fire. It was fun.

Anderson-Lopez: The metaphor I like to say is with Frozen and Frozen 2, we are the co-architects of the building, so we have to be there for years working on what materials are you using and the songs have to hold up the whole building. With WandaVision, someone else built the building and we just get to decorate the lobby. And it’s much easier to decorate the lobby than make the whole building. 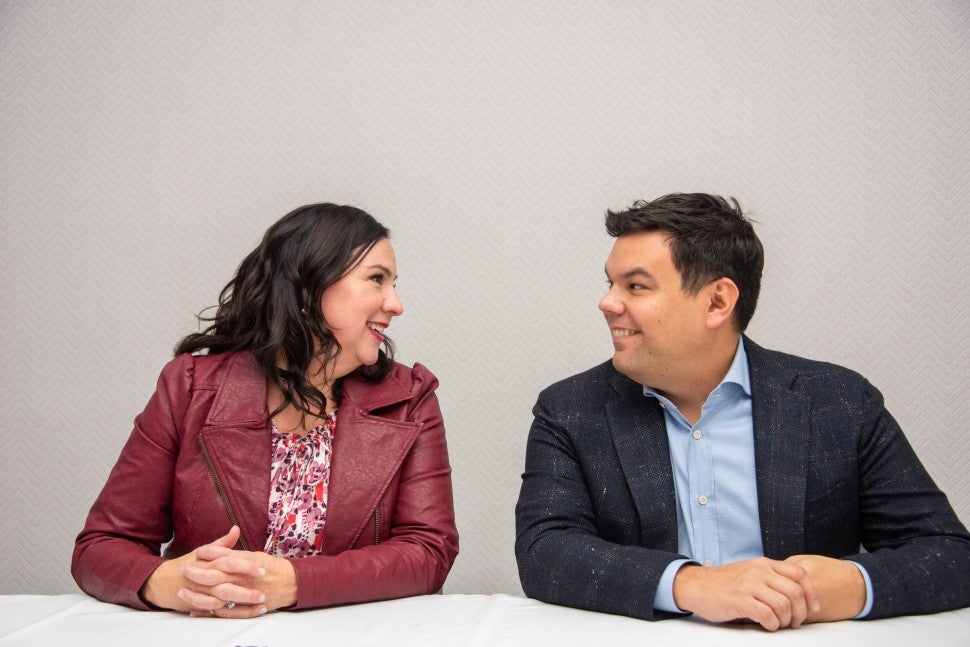 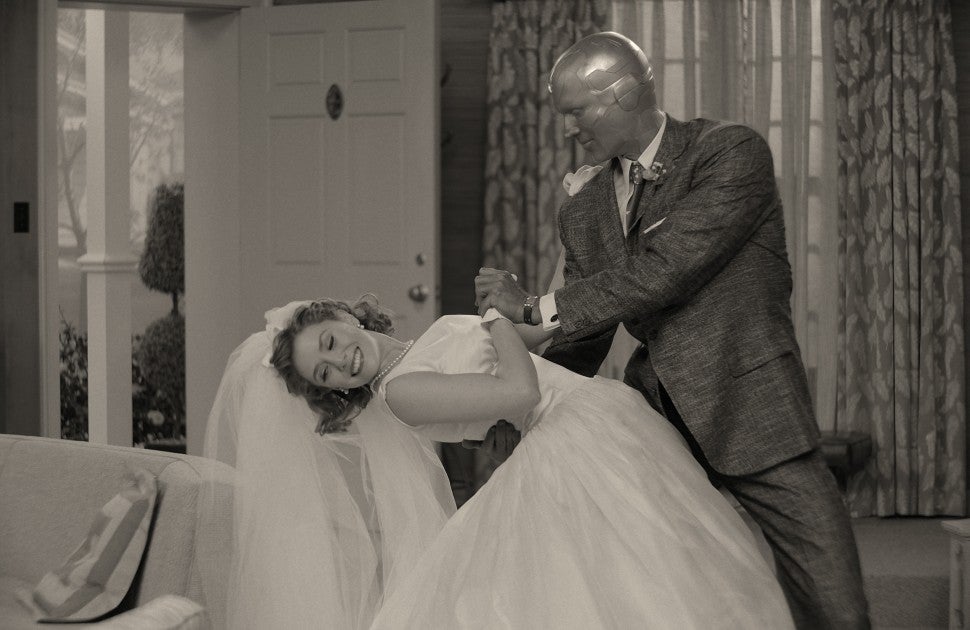 What was your process like writing different themes for each episode? Are you watching all of the TV themes from that era to get inspiration?

Anderson-Lopez: Well, the process was being born in the ’70s and watching TV. I grew up in the New York area and if you were sick, you got to stay home and watch sitcoms through every decade on TV, like 9 a.m. was I Love Lucy and My Three Sons and The Dick Van Dyke Show and then by 2 p.m. you were into the ’70s with, like, Gilligan’s Island and The Partridge Family and The Brady Bunch and by 5 p.m., you were well into the ’80s, so all of those hours watching television and loving the music — even the jingles that were played in the commercials — sort of downloading all of that really fed into getting this job and writing the theme songs from those hours that just live in my body.

You mentioned that you had a surprisingly easy time writing the song, but was there any era that you felt like was the toughest to crack?

Anderson-Lopez: Without giving too much away, there’s a decade that we were both in college — Bobby was busy writing songs that happened in Yale swimming pools, and I was busy coming out of drawer saying Beckett and Pinter lines — that was hard, because we had to go back. Instead of it being something that we knew from the past, we had to research, “What were people watching in the late ’90s?”

I feel like a lot of people have the episode 2 theme stuck in their head right now, but we have quite a few more to go. Which one got stuck in your head the most?

Anderson-Lopez: The ’80s. The one from the ’80s is probably the closest to our life right now, and that’s all I can say about that.

Lopez: It’s sad to be doing this before it comes out and not be able to talk about it!

When you were pitched the show, what did you imagine it would be versus what it ended up being? Did Matt give you the full rundown?

Lopez: It’s such a high-concept thing, so he pitched us the concept and we were absolutely captivated, and then we got to read some early drafts of the script and it just brought it to life in such a crazy way. We kept thinking, “They’re really gonna make this?! This is so experimental!” We got to see artwork. We all watched a bunch of sitcoms, just did a deep dive on YouTube and watched a lot of opening segments and absorb it for when we got to write. But we never wanted to write a parody. We wanted to write as though we were in that era writing a song to encapsulate a show from that era.

Anderson-Lopez: The other fun thing we did as a family is we went back and watched every movie that Wanda and Vision were together in just to make sure we knew their narrative, which leads me to the fact that Marvel, they’re just the best storytellers out there right now. Their narratives are so tight and complex and use ways to surprise us and now this, like, high-concept big swing. They’ve passed PhD on storytelling and now they’re in like their postdoc.

I’m so ready for whatever this next chapter is, because you know it’s just going to get so weird and I’m so here for it.

Lopez: It gets better and better.

Good. Will the soundtrack be released, do you know?

Anderson-Lopez: I’ve only heard on Twitter that the week after, they release the song and the score from the previous week. And by the way, Christophe Beck’s musical work on this, we’ve worked together for so long — they also went to Yale together — but his work is so great it’s worth listening to just alone.

What I’m gathering from this interview is I should’ve gone to Yale.

Anderson-Lopez: [Laughs] I should’ve too.

Lopez: It’s a good idea if you get the chance!

Robert, I wanted to ask you, is there a recording of Book of Mormon with the original cast that you know of and have there been any talks of releasing it after the reception to Hamilton and these other Broadway productions that have streamed during quarantine?

Lopez: Man, I wish. I know there’s one that they made, and it was just, like, one camera in the back of the theater. It was pretty sad. So, I don’t think that they could release that, and it wouldn’t be fun to watch. But I know that there is some talk of however we get to come back to Broadway, maybe doing that at some point to getting the streaming version out there. I would love that.

Raymond van Barneveld will make his big-stage return against Scottish fireman Alan Soutar at the UK Open on Friday afternoon,

Raymond van Barneveld will make his big-stage return against Scottish fireman Alan Soutar at the UK Open on Friday afternoon,