Home » TV & Movies » Where is Dan Walker? Host missing from BBC Breakfast as Jon Kay steps in to host

Dan Walker and Louise Minchin present BBC Breakfast on Mondays, Tuesdays and Wednesdays. However, Dan was nowhere to be seen this morning as Louise announced on Twitter that Jon Kay would be presenting the show with her today. BBC Breakfast viewers flocked to Twitter to question why Dan was missing from his spot on the BBC sofa.

Louise tweeted: “Good morning @jonkay01 is here with me on #BBCBreakfast and your telly box this morning.”

The pair kicked off the show with the morning’s headlines in the usual fashion.

Responding to Louise’s tweet, one asked: “What’s he done with @mrdanwalker?” 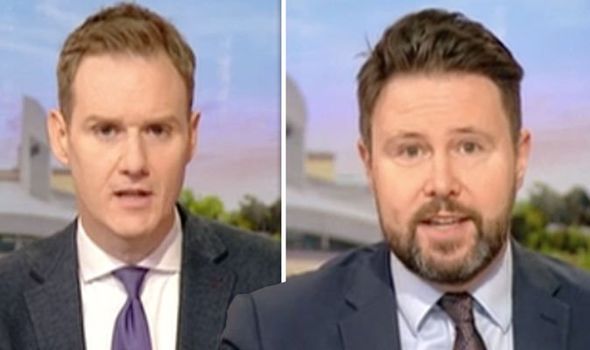 We will use your email address only for sending you newsletters. Please see our Privacy Notice for details of your data protection rights. Naga Munchetty and Charlie Stayt replaced on BBC Breakfast

Another concerned fan said: “@mrdanwalker hope you’re well, you’re not on the @BBCBreakfastsofa.”

“@mrdanwalker you ok bro you just got a day off hope u are ok x,” someone else wrote.