Home » TV & Movies » Who Wants to Be a Millionaire derailed by ‘phone a friend’ interruption: ‘Should listen!’

ITV quiz show Who Wants to Be a Millionaire has already seen some big prize winners this week after the Jeremy Clarkson-fronted series began again on Sunday. Tonight had a new selection of contestants hoping to make it in the hot seat. First up was Barry Love, who stumbled upon one question in particular but after using a lifeline to phone his friend Lynn, fans couldn’t help but comment on the call, which left them distracted from the programme.

So far, there have been two players to walk away with six figures in the latest series after Andrew Townsley came within touching distance of the million-pound prize.

He bagged £500k on Tuesday night after deciding against playing the final question.

Another player came agonisingly close last night in the form of Christina Bennett, who walked away with £125,000 in a thrilling finale.

Tonight, more hopefuls were up at the fastest finger first chairs in a bid to sit opposite Jeremy and take home some money. 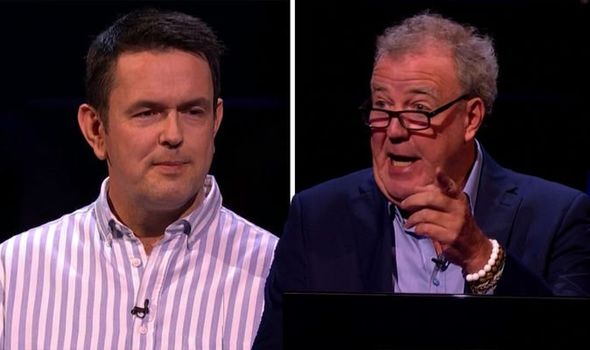 Player Barry was the first up after answering the group’s question correctly in just 1.79 seconds, leaving the host impressed.

He started off strongly and looked to be storming ahead but was thrown into doubt after a couple of music questions popped up.

Barry found himself in more difficulty on his £32,000 question and ended up deciding to phone his friend, Lynn.

The question asked David: “Joel Robuchon, who died in 2018, is a famous name in which field?” 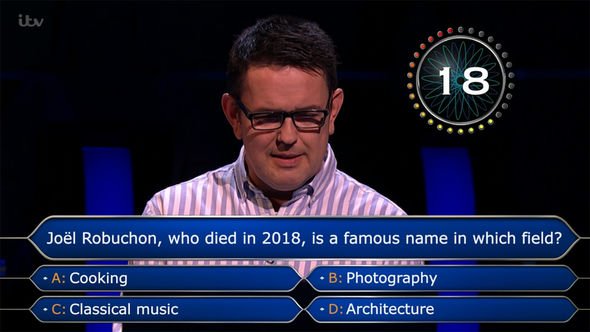 Jeremy read out the four possible answers, which were cooking, classical music, photography and architecture.

After being unsure of the answer himself and asking the host, he still couldn’t come to a decision and used up his final lifeline.

However, the call left viewers distracted after Lynn was interrupted by an unexpected source – her dog.

Taking to Twitter, one fan said: “There’s a dog barking in the phone a friend house pahahaha #WhoWantsToBeAMillionaire.”

Another commented: “Lynn’s dog barking is so distracting #WhoWantsToBeAMillionaire.”

“He should listen to the dog. #WhoWantsToBeAMillionaire,” joked a third.

A fourth shared: “Took me a moment to realise the dog barking is down her end of the phone #WhoWantsToBeAMillionaire.”

Another wrote: “Very loud dog in the background #WhoWantsToBeAMillionaire @MillionaireUK.”

Create your own survey at doopoll.co

The host even commented on the background noise, saying: “Has she got a really noisy dog?”

Barry laughed in response and after Lynn didn’t know the answer, he decided not to play the question, walking away with £16,000.

After his decision, Jeremy said: “I guess that’s a wood-burning stove so that’s not so bad. Going to have to ask, you what you would have gone for?”

Barry remarked: “Don’t think it’s cooking or classic music, might have gone with photography,” as the host revealed the correct answer.