THERE is nothing the fashion industry likes more than a collaboration.
Sorry, in fashion speak, a “collab”.

Whether it is Louis Vuitton working with Supreme, Vetements and Juicy Couture or Dior getting into bed with Nike, there is nothing hotter than a salacious fashion double act. 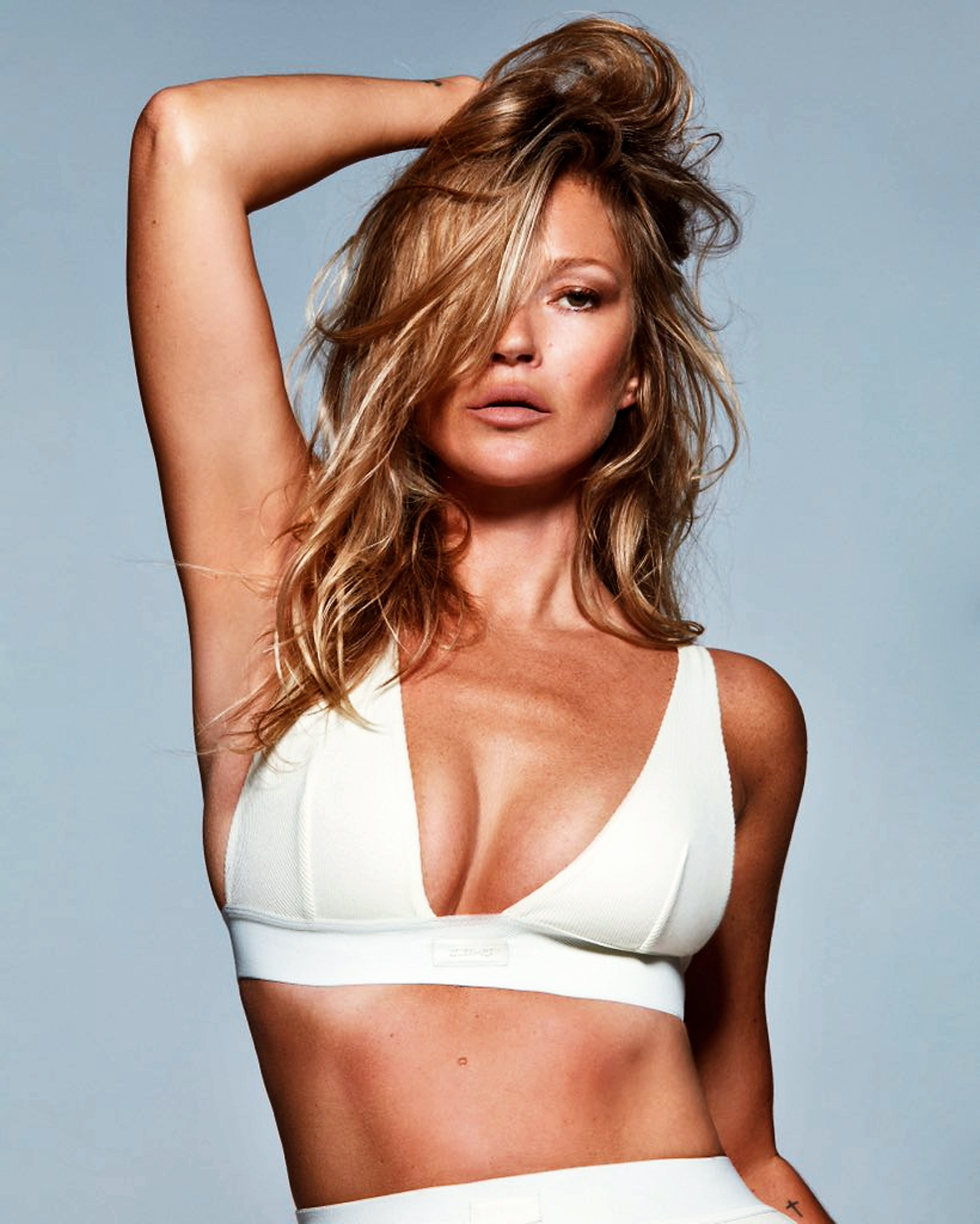 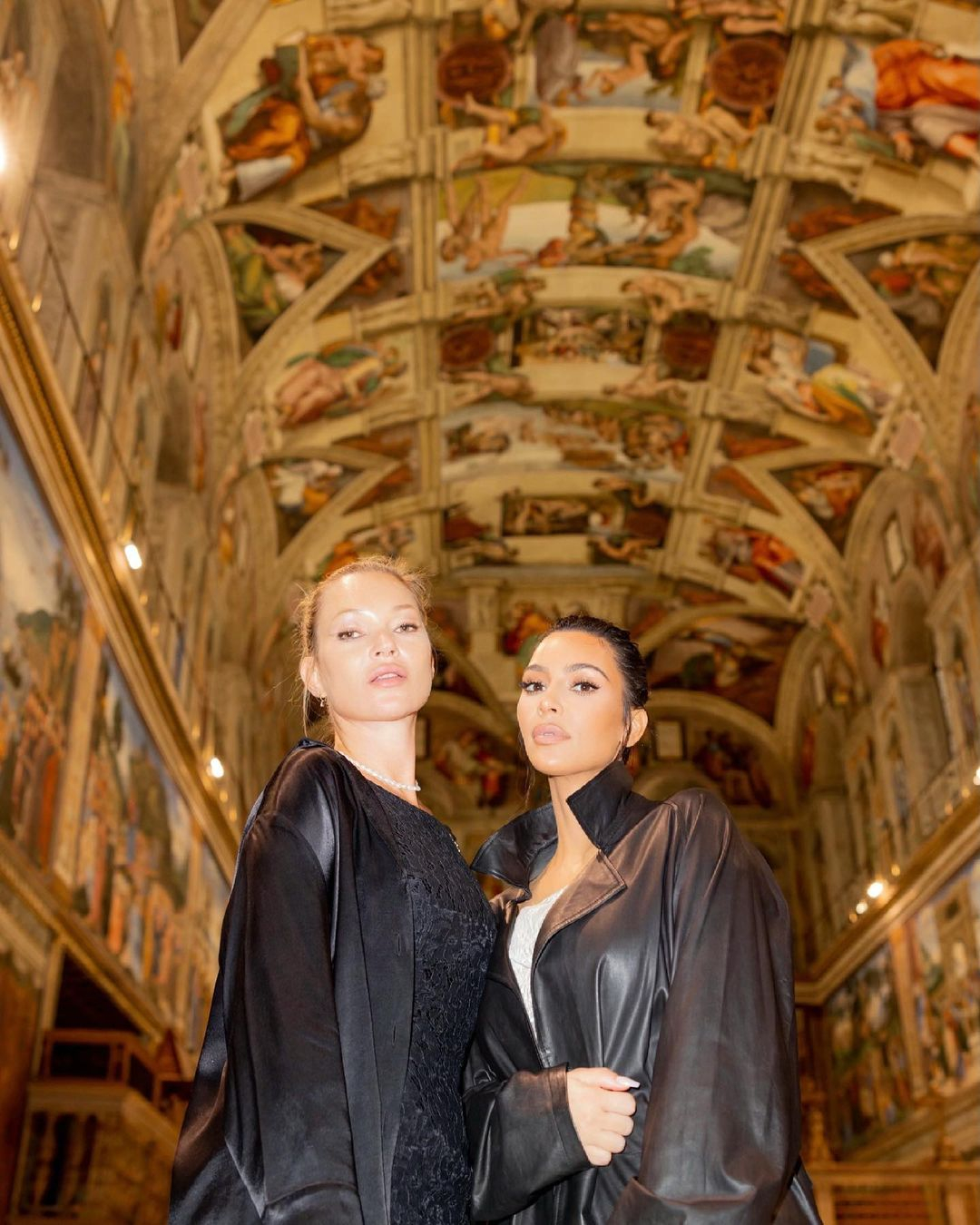 The latest fashion love-in is so extraordinary even industry bible Vogue thought we would never see the day.

But the sheer strangeness of Kim Kardashian teaming up with Kate Moss could be what makes it so successful.

On Tuesday it was announced that the legendary British supermodel is the new face of 40-year-old Kim’s Skims underwear, shapewear and loungewear brand.

The reality star and global businesswoman confirmed the news on her social media pages with a series of alluring pictures of Kate, 47, decked out in her skimpies.

The pair of them were spotted together a few weeks ago at the Vatican in Rome, of all places — where they were both dressed as though they were going to completely different events, oddly — but I don’t think anyone expected any kind of sartorial divine intervention to have produced this kind of commercial relationship.

Well, apart from Vogue that is. Reporting on Kate and Kim’s unlikely tourist jaunt in Rome, one of their writers finished their article with the following: “What next, Mossy in a Skims campaign?

"Of all the weird things to have happened in 2021, Kate in flesh-coloured leggings would be the least of it.”

Who would have thought it? The waif and the bootylicious reality star. The skinny runway queen and the voluptuous TV celebrity. Beauty and . . . a different kind of beauty.

Kim and Kate are chalk and cheese. One never really does this sort of thing, and the other tends to do it all the time.

Kim married an outspoken global superstar, while Kate had a daughter with a magazine publisher and married a laconic hipster.

I have been in the same room as both of them on a number of occasions, and I’ve never seen them acknowledge each other. I’ve seen both of them on the same red carpet, and neither has ever taken the blind bit of notice of the other.

“Introducing Kate Moss for @SKIMS,” Kardashian wrote on Instagram. “I first met @katemoss- agency in 2014 through [Burberry designer] Riccardo Tisci, and was instantly struck by her cheeky humour, authentic and classic beauty — we’ve been friends ever since!

"She is THE fashion icon, defining a whole generation of style and I am honoured to feature her as the new face of Skims this Summer!”

Talking about the pictures, Kim also told Vogue: “We wanted to keep the focus on Kate — she is a force in her own right with such a strong presence, so we kept the set and background neutral to make sure that really came through. It is 100 per cent Kate being Kate — she’s the best in the business for a reason.”

And let’s face it, this trendsetting love-in is going to be good for both of them.

For Kim it’s a surefire way to gain fashion credibility, and for Kate it’s another way to connect with a huge digital audience who may not have been born when she first started having success back in the Nineties.

In fact, it makes so much sense that you wonder why one of them didn’t think of this before.

Kim is the acknowledged queen of the internet, with a digital reach that dwarfs most fashion influencers. And yet there has always been something a little tacky about her appeal, an appeal which in the past she has been self-aware enough to exploit.

However, there comes a time when even a digital diva needs the endorsement of the luxury world. And there is no greater endorsement than Kate.

If Kate gives you the nod, if she wears your clothes, goes to your party, appears on your magazine cover or becomes an ambassador for your brand, then you know you are doing something right.

Or at least paying the right fee.

Kate has been the queen of the fashion world for the last 30 years, not just one of the world’s most famous models, but also something of an enigmatic role model, an icon who rarely speaks.

She first became famous in the early Nineties, when she was associated with Cool Britannia, Britpop and wafer-thin supermodels, but since then has established herself as probably the most famous woman in the fashion industry.

But even fashion icons keep an eye on the clock, and for the last few years that clock has been digital. Which is why it makes so much sense for Kate to align herself with someone who has made the digital space her domain.

To be fair, Kim has been espousing her new partner’s style for some time. In 2014 she said, “I love Kate Moss. I love how she wears her winged eyeliner and her messy hair and how it looks so effortless but still put together. It looks beachy and messy at the same time; I love her glamour.”

Plus, in 2013 she used a £31,000 Hermes Birkin bag as a nappy bag for North, her first child with ex-husband Kanye West. She is said to have been inspired by Kate, who carried a white Birkin when her daughter Lila Grace was small.

Two years later the pair of them took part in Alexander Wang’s Do Something campaign, posing in branded streetwear to lend support to social change.

As if this wasn’t enough to ingratiate herself with her new fashion friend, Kim later told her hair stylist, Michael Silva, to make her look like Kate for the annual Grammy Awards.

Michael said: “Our inspiration was some editorial images I had pulled of Moss. Kim was so glamorous with the gown we wanted to keep it fashion forward.”

And there’s the rub. Everything these days is about looking ahead, because by dint of the industry’s inbuilt obsolescence, if you’re not fashion forward then you’re obviously fashion backwards.

No, what we have here is actually a meeting of two very different types of icons, two women who have conquered the same industry using completely opposite methods.

On the one hand you have Kate Moss, a woman who has taken great pride in never talking to the press, who is as famous for being an enigma as she is for parading up and down the catwalk, a woman who is perfectly happy to pose for the camera, but who doesn’t really want to speak to it.

And on the other you have Kim Kardashian, a woman who has played out most of her life in front of all forms of cameras, be they iPhones or the TV variety.

She has made a virtue out of sharing her life with her public, while Kate has made it her mission to keep as much of her life as private as possible. One loves the paparazzi, the other very much doesn’t.

So in a way this collaboration is the very best fashion collab there is, a genuine melding of exposure and exclusivity, a fusing of the public and the private, a blend of the hot and the cool.

Fashion has always been driven by a fundamental desire to be seen, but not necessarily understood. And in the inspired partnership of Kate and Kim we have finally arrived at a place where both of these things can happily coexist.

And the media is understandably loving it. As, no doubt, will the public, who are likely to embrace this double act with the same enthusiasm that they once embraced French and Saunders, Cagney and Lacey or Thelma and Louise.

Kim and Kate. You couldn’t make it up.

HOW THEY MEASURE UP 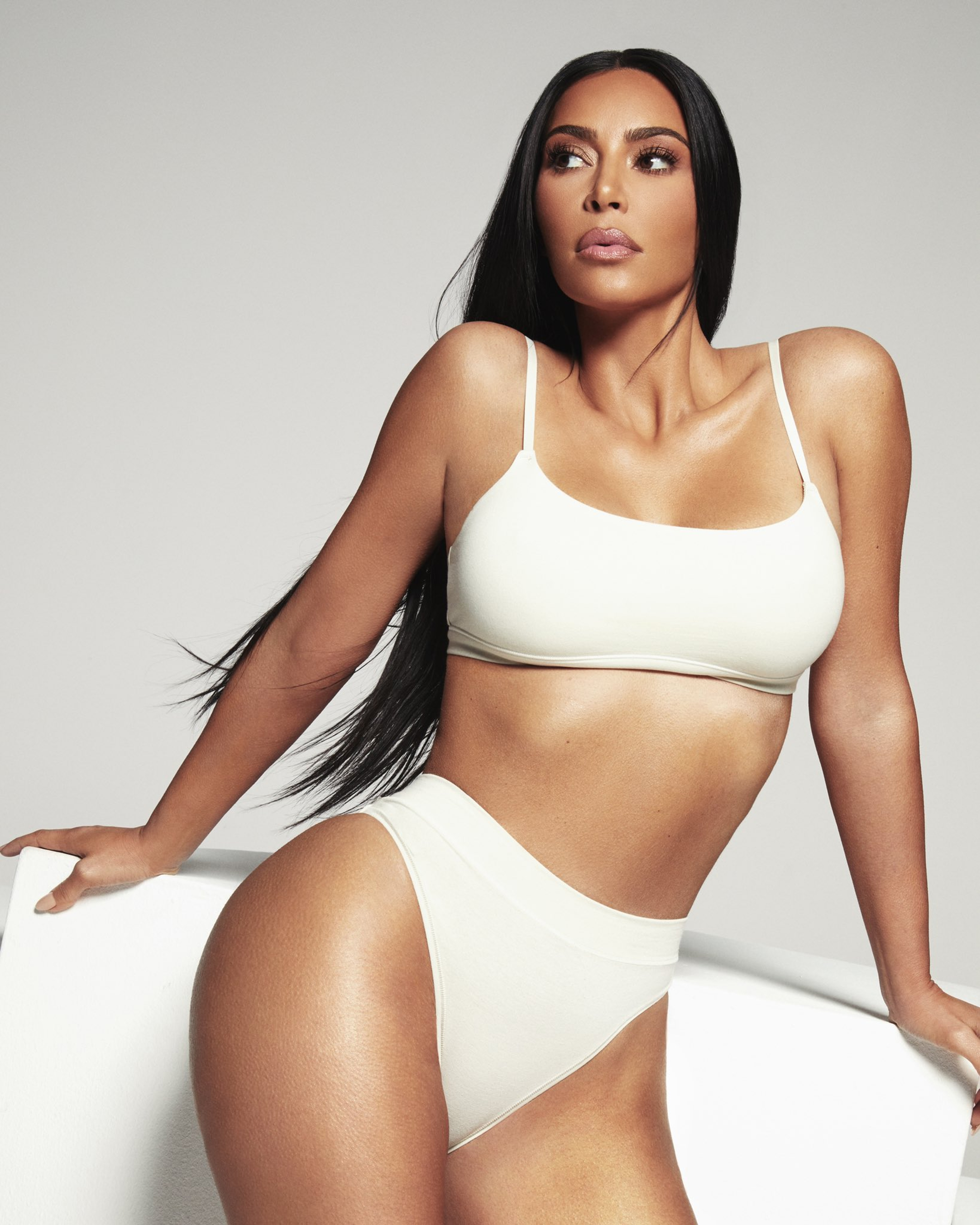 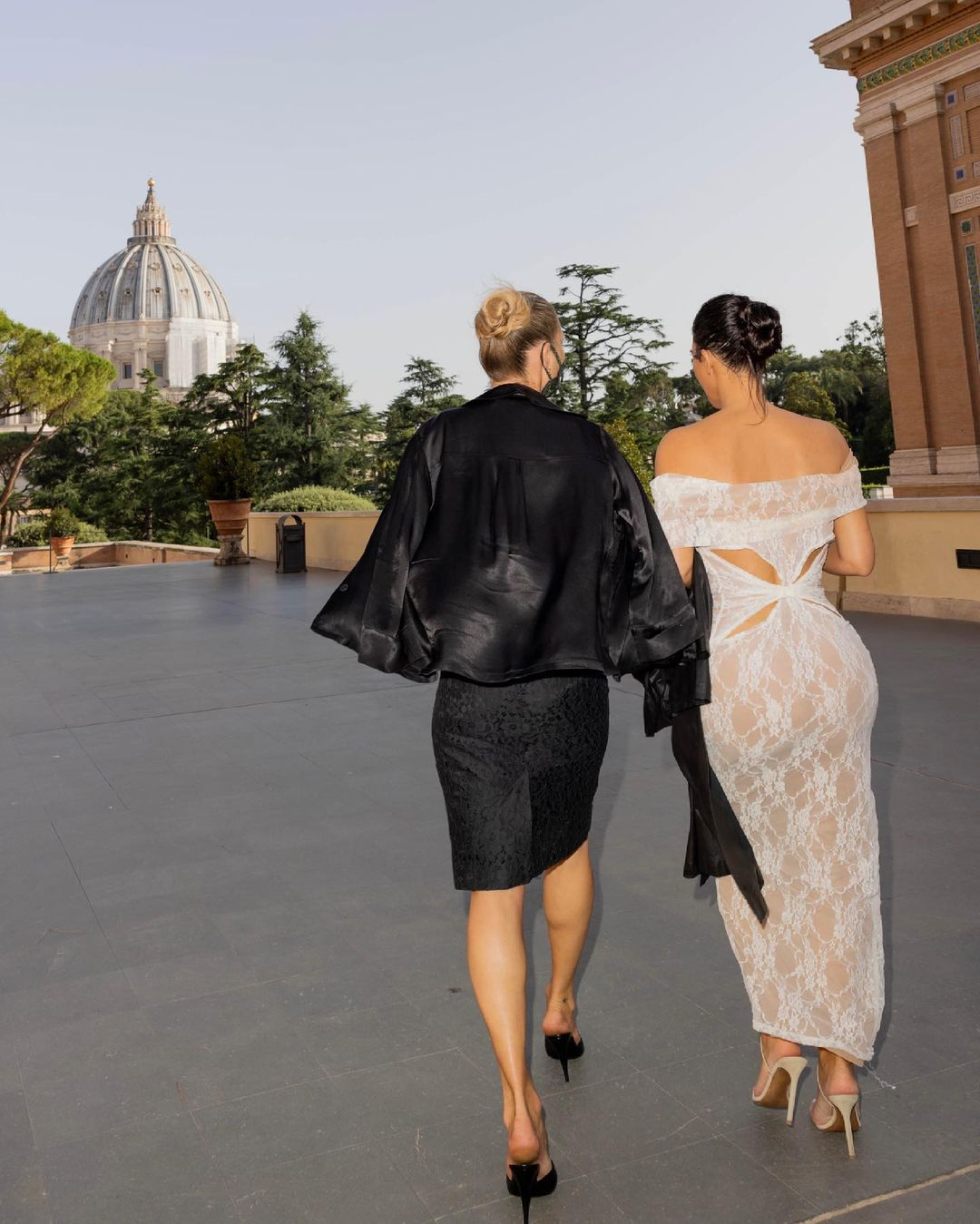 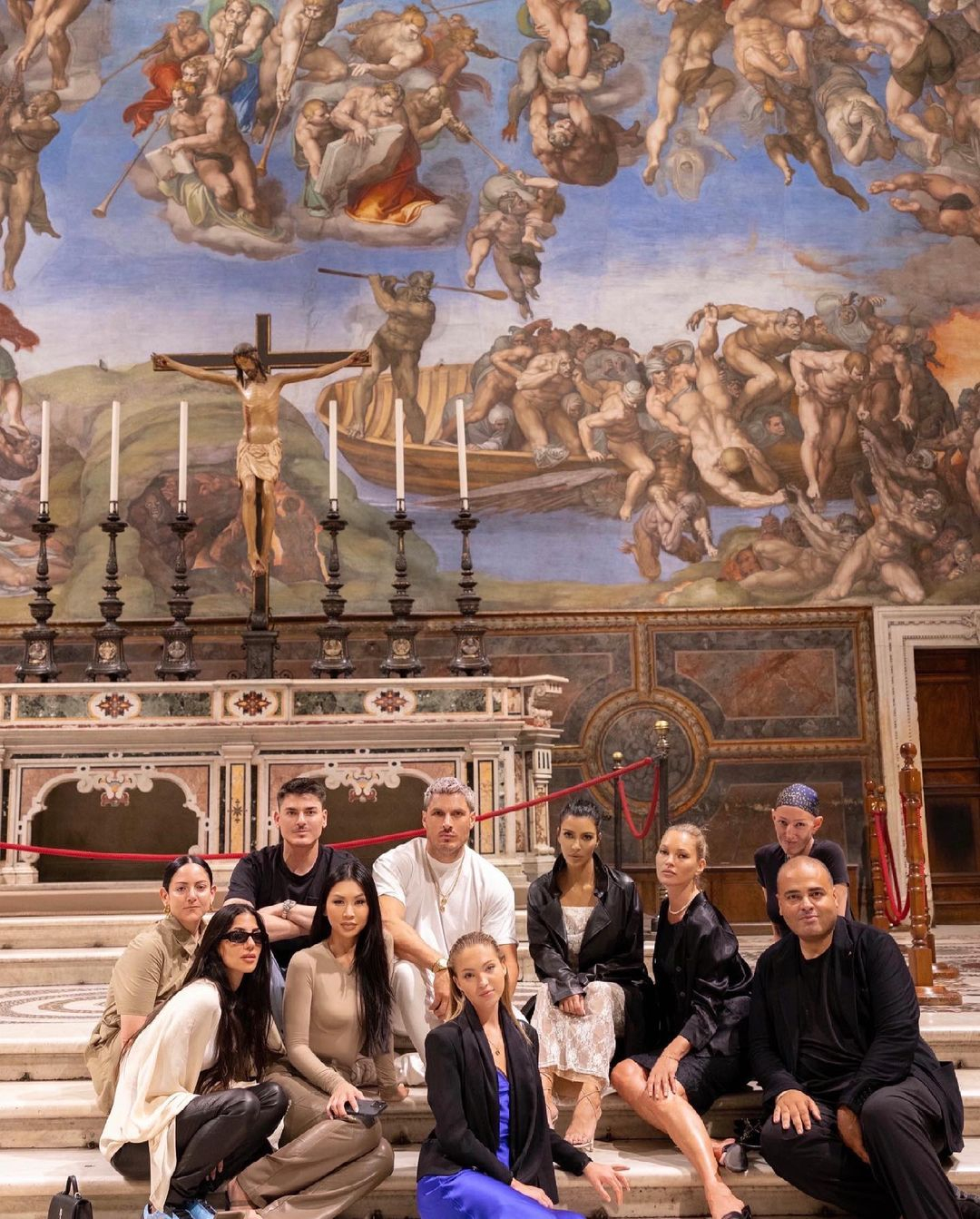