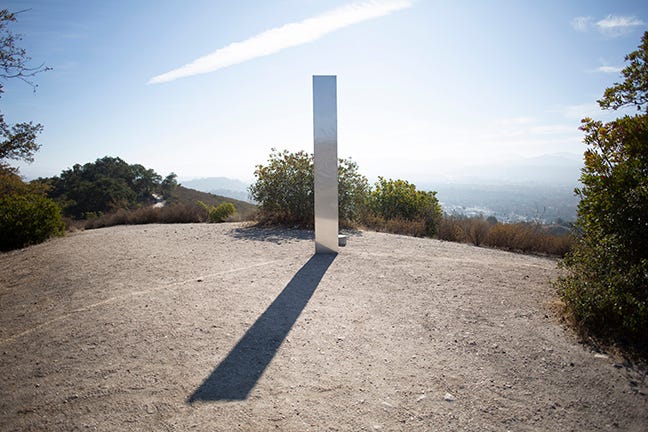 Metal monolith mania has swept the world in the last two weeks.

Now, a third metal slab has appeared atop Pine Mountain in Atascadero, California.

Hikers stumbled across the 10-foot-tall, stainless steel monolith on Wednesday morning. It's almost an exact match to two other metal monoliths that appeared in Utah and Romania in the last two weeks.

According to local outlet Atascadero News, the California monolith was three-sided, just like the one in Utah. But unlike the one in the Utah desert, this 200-pound structure wasn't firmly attached to the ground and could be knocked over with a firm push.

It's unclear where this new monolith came from, and when it got put up. But local hiker Ray Johnson told Atascadero News the structure was not there on Tuesday.

Utah state officials discovered a monolith on November 18 while combing the desert south of Moab for bighorn sheep.

The Romanian monolith — which was covered in interconnected circles —  only lasted four days before it disappeared on Tuesday.

The next day, hikers found the California monolith.

Insider examined Google Earth data and found that the Utah monolith appeared sometime between August 2015 and October 2016. Equivalent satellite imagery to establish whether the Romanian and California monoliths were around before their recent discoveries is not available.

There was no obvious indication of who erected these monoliths. Utah state officials poked fun at the idea that aliens left behind the structure.

"It is illegal to install structures or art without authorization on federally managed public lands, no matter what planet you're from," the division said in a statement.

All three seem akin to the giant slab from an iconic scene in Stanley Kubrick's 1968 film, "2001: A Space Odyssey."

The origin and subsequent disappearance of both monoliths remain a mystery, though a leading theory reported by the New York Times suggests the Utah structure is a work by the US artist John McCracken.