Kyiv: Volodymyr Zelensky has dismissed several ministers and banned top officials from travelling abroad in a clampdown on corruption.

Almost a dozen ministers and administration officials lost their jobs in the biggest shake-up of Ukraine’s government since the start of the war.

The most prominent head to roll was that of Kyrylo Tymoshenko, the deputy head of Zelensky’s presidential office, who had been accused of siphoning off expensive cars including a Porsche for personal use.

The president ordered the clearout after a series of scandals involving figures at the Defence Ministry and prominent members of his team.

Ukraine has been pressured by Western governments to demonstrate progress on anti-corruption as a condition of extensive foreign financial and military aid. In his latest nightly address to the nation, Zelensky said civil servants would no longer be allowed to circumvent a ban on travel for military-age men. 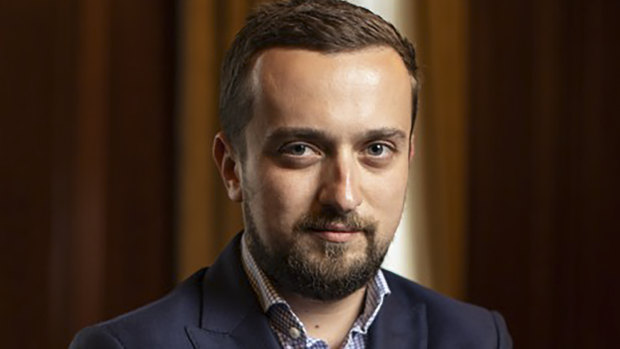 Resigned: Kyrylo Tymoshenko, deputy head of the office of the President of Ukraine.Credit:PPO/AP

Such men are barred from leaving the country under martial law but senior officials have previously been allowed to procure exemptions for official work.

“There are also personnel decisions,” he said, promising that “Ukraine will not show weakness. The state will not show weakness”. The government said six cabinet ministers and five regional governors had left their jobs by the end of the day. They included Oleksiy Symonenko, the deputy prosecutor general, whose winter holiday in Spain prompted the ban on official travel.

Tymoshenko said earlier he had tendered his resignation but did not give a reason.

A charismatic and prominent member of Zelensky’s team, he has built up a considerable social media following since the war began and had been responsible for rebuilding infrastructure destroyed in Russia’s winter bombing campaign.

But he had faced allegations of misusing foreign aid, after a Ukrainian media outlet reported in October that he was driving a new Chevrolet Tahoe SUV that had been donated by General Motors for use in humanitarian evacuations.

He admitted to using the vehicle for work trips, and said he had asked the domestic security service to transfer it to front-line areas for its intended use.

The National Agency for the Prevention of Corruption said last month that it had opened another investigation after it was reported Tymoshenko was using a $140,000 Porsche.

The report published on Saturday alleged the contract proved individuals in the ministry were scheming with food suppliers to defraud the army of millions of dollars.

Defence Minister Oleksiy Reznikov said in a social media post that the allegations against Shapovalov were “unfounded and baseless” but welcomed his resignation as “a demonstration that the interests of defence are higher than any cabinet position”.

Ukraine’s ruling party drew up a bill on Tuesday aiming to boost transparency in defence procurement.

Anastasia Radina, head of the parliamentary committee for anti-corruption matters, said the bill would make it obligatory for prices paid for products and services for the army to be made public on the state procurement website.

Radina, a member of Zelensky’s Servant of the People party, said the requirement would not be introduced for arms purchases. “We are obliged to ensure a level of transparency in procurement for the army, under which such scandals simply will not arise. Can it be done in a way that does not expose customers and suppliers to additional risks? Yes,” she said.

The legislation has been sent to parliament for discussion and will need to be approved in three votes in that chamber before being signed into law by the president.

On Sunday, Vasyl Lozynsky, a deputy minister at the infrastructure ministry, was dismissed after he was arrested in a sting by the National Anti-Corruption Bureau. He is accused of accepting a $US400,000 ($567,000) bribe for fixing an inflated procurement contract for generators.

A recent flurry of corruption allegations comes at a sensitive time for Zelensky. His government is heavily dependent on Western financial and military aid. Ukrainian diplomats often admit they worry about public opinion in donor countries fading. Russian propaganda has frequently tried to argue that such support goes to waste.

Zelensky’s crackdown on alleged graft also has domestic implications. He came to power in 2019 on a largely anti-establishment and anti-corruption platform.

The EU cited progress on corruption as a justification for granting Ukraine candidate status last year.

Oleksandr Novikov, the head of the agency investigating Tymoshenko’s taste in cars, Ukrainian local media last month that the probe was partly prompted by Western demands for transparency in exchange for aid.