Home » World News » A proud fighter for justice for many

Jenifer Lee packed a lot into her 83 years including meeting, and in some cases advising, prime ministers, premiers and princesses (she met Diana). She was a tireless community advocate and proudly received a life membership of the ALP from Premier Daniel Andrews in recognition of more than 50 years of dedicated service.

She was a trailblazer in many ways, returning to study and beginning a successful professional career while raising her five children, much of it as a single mother. She would fight for justice for women, for humane rehabilitation for alcoholics and addicts, for the homeless and for the rights of the elderly. She started a second career in the law in her 50s and was awarded a life-time achievement award from the Law Institute of Victoria.

She was born Jenifer Mary Scully into a large, proudly Irish-Catholic family (nine girls and two boys) that eventually settled in Essendon. Her parents and grandparents were deeply involved in the Australian Labor Party and their lives were irrevocably defined by the ALP-DLP split of 1955. This commitment to the political process was accompanied at home by the constant background of ABC radio and lively conversation which fostered a passion for education and a lifetime interest in advocacy and social justice, which she instilled in her children and grandchildren. 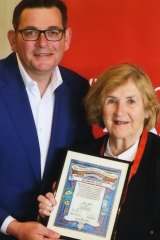 Jenifer Lee receives her life membership of the ALP from Premier Daniel Andrews in November 2019.

On leaving St Columbus in year 10, Jenifer briefly worked as a nurse before marrying Edward Francis Lee (deceased) in her early 20s ceasing work, as was the expectation of all young women, to start a family. Initially living in a bungalow behind her in-laws in South Melbourne, the family moved to Essendon, with a brief stint in Darwin, before eventually settling in Bulleen with their five children.

In the early 1970s, Jenifer completed her matriculation before studying for a bachelor of social work at La Trobe University, courtesy of the brief period of free tertiary education, while being involved in the Women’s Electoral Lobby and the early Neighbourhood House movement.

She believed strongly that community services were not geared to meet the needs of women and spent the 1970s developing new models that involved the clients, including women, in the development and evaluation of the service. As her career flourished, she grew apart from her husband, Edward, and they eventually separated as she continued to support and guide her children, and many of their friends, in a chaotically busy but welcoming home in Bulleen.

In 1982, Jenifer was appointed as the Victorian state director of Alcohol and Drug Services and established the first rehabilitation programs aimed at women. She attended the 1985 national drug summit as policy adviser to the Victorian premier and from 1984 implemented the Victorian component of the policy to contain the spread of AIDS through intravenous drug use.

Many of these policies, such as needle exchange, were controversial but have undoubtedly saved the lives of many Australians. She was also appointed by successive health ministers to serve on the Mental Health Review Board from 1987 until 2006.

Jenifer believed that second-wave feminism created a global social and economic revolution but that much of its success locally was due to women working within their communities to create practical roadmaps for other women to find their way to education and work. Much of her work was dedicated to creating those roadmaps and celebrating the achievements of women who had followed the path.

This included her early involvement in Emily’s List which encouraged women in political careers and her 20-year membership of the Mary Owen dinner committee, which honoured feminist achievers where attendees would dress in the feminist colours of green, white, and purple to celebrate the changing status of women. This vibrant community provided a focal point for her enduring friendships with other inspiring, progressive women.

Jenifer married Donald James Neish (deceased) in her late 40s remaining together until his death in 2008. With Don she established a private art gallery in St Kilda in the early 1990s while also enjoying extensive travel together including owning, in a syndicate, a villa in Montcuq in the south of France, which acted as the base for regular European adventures. Jenifer and Don eventually moved to Armadale where she co-ordinated the neighbuorhood walking group and took a keen interest in local issues.

She was the matriarch of a large, organic family of children, grandchildren, in-laws and steps that in many ways is the modern version of the large family she knew as a child. She would eventually buy a holiday house in Blairgowrie to spend time with her family and friends and enjoyed walks on the beach, painting and reading.

She rarely missed a major school performance, presentation, or sporting event involving her grandchildren also taking them on interstate trips, visits to the museums, art galleries and the theatre or to prowl the backcourts at the Australian Open during the first week of competition.

Despite her busy professional and social life, she was most in her element when her family came together for important celebrations or when offering sage advice to the many that sought her counsel. She was always able to see the potential in everyone who came into her sphere, even when they could not see it in themselves, and supported and inspired many of her family and friends to be best, they could be.

During the recent debate on the under representation of women in the Australian Day honours we have reflected that our mother’s life is the sort that should be honoured but she had neither the resources nor connections to be nominated and was too busy living her remarkable life to do so. Perhaps the Australian honours committee could do more to seek out those exceptional women whose lives deserve more community recognition rather than wait for those women to come to it. We can only hope that they make this change and if our mother’s story can be part of that change that would be another addition to a legacy that makes us, her children, exceptionally proud.

A memorial service was held at St Carthage’s, Parkville, on February 20 for family and close friends to celebrate a life well lived.

Written by Matthew Lee and Timothy Lee with help from Emma-Louise Lee and Nicola Dear.