Under escort, the Pakistani military take us to the Torkham border crossing with Afghanistan along the dusty and winding Khyber pass.

There is nervousness across this region about what will happen now there are new rulers in Kabul.

And at the crossing, on the ancient Silk Road, that change of the guard is a surreal sight.

They perhaps more than anything exemplify the new dystopia of Afghanistan.

Another guard walks menacingly beside the small crowd gathering to cross.

He swishes a whip nonchalantly in his right hand.

Those that are crossing must have visas – for many, Pakistan is the only place they can get medical treatment.

A refugee crisis has not happened yet, but the United Nations is warning if humanitarian assistance dries up, the consequences will be disastrous. The Pakistani government has over the past few years erected a security fence along what was once a porous border. It hopes it will protect the country from the turmoil next door.

Islamabad is fearful that if Afghanistan descends into chaos, the volatility will soon wash across its own borders.

After the Soviets left in 1989 there was a mass exodus of refugees – it does not want the same thing to happen again.

There are already nearly four million Afghan refugees in Pakistan after 40 years of war.

The other issue is the ever-present spectre of terrorism. An ungoverned, insecure Afghanistan would be fertile ground for the terror organisations that are already well seeded in the country.

Foreign Secretary Dominic Raab visited the border area, taking a helicopter along the mountain passes where he was briefed by the Pakistani military.

The UK is still trying to get people out of Afghanistan. Pakistan’s help will be vital in that endeavour.

There is then a common interest in stopping the country plunging into anarchy.

The West would find it hard to deal with a major refugee crisis, and can also ill afford Afghanistan becoming a Petri dish for terror. 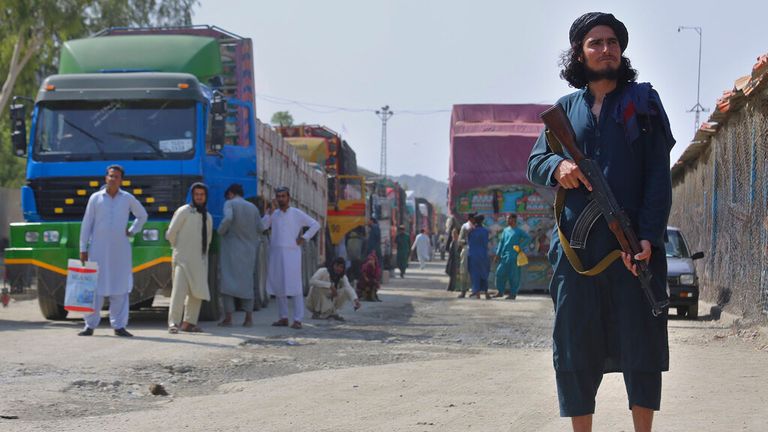 But the West knows after its humiliating defeat, it is largely impotent to influence events inside the country.

There is some leverage, though – the Taliban wants financial assistance and recognition.

Pakistan is urging the UK to engage with the Taliban using those twin levers as a way to set conditions on which to build.

And the reality is – in the absence of anyone else to do business and keep order – there’s no other real choice.